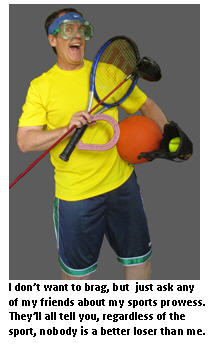 I love playing sports. My friends love to play me in sports, too. For years I thought it was because they enjoyed my company. They later told me that I tend to get on their nerves. So why do they keep playing me? Answer: Because they love the thrill of victory, which they are assured of experiencing any time they play me – in any sport.

Ya’ know that old expression “He’s a jack of all trades but a king of none”?  Well, I’m more like the three of clubs. You see, as much as I love sports, I’ve never really been that good at them.

Case in point: I’ve played the same guy in tennis for 12 years. Let’s call him “Steve”, because, well, his name is Steve. In that 12 years, I can tell you the exact number of sets I have won against Steve. Exactly zero.

I’ve been golfing with another friend for 15 years. I’ll just refer to him as “Kevin from Ballard” because I don’t feel it’s appropriate to reveal his last name here – but since I know you’re curious, it’s “Breecher.” I have never beaten Kevin Breecher in golf – ever. Every year he increases my handicap advantage. He now gives me 29 strokes. He still always wins. Last month, he offered to hit all his tee shots blindfolded. He won by five strokes.

One thing my friends Steve and Kevin have in common – besides being annoying winners – is that they always feel better about themselves after trouncing me. It never gets old for them.