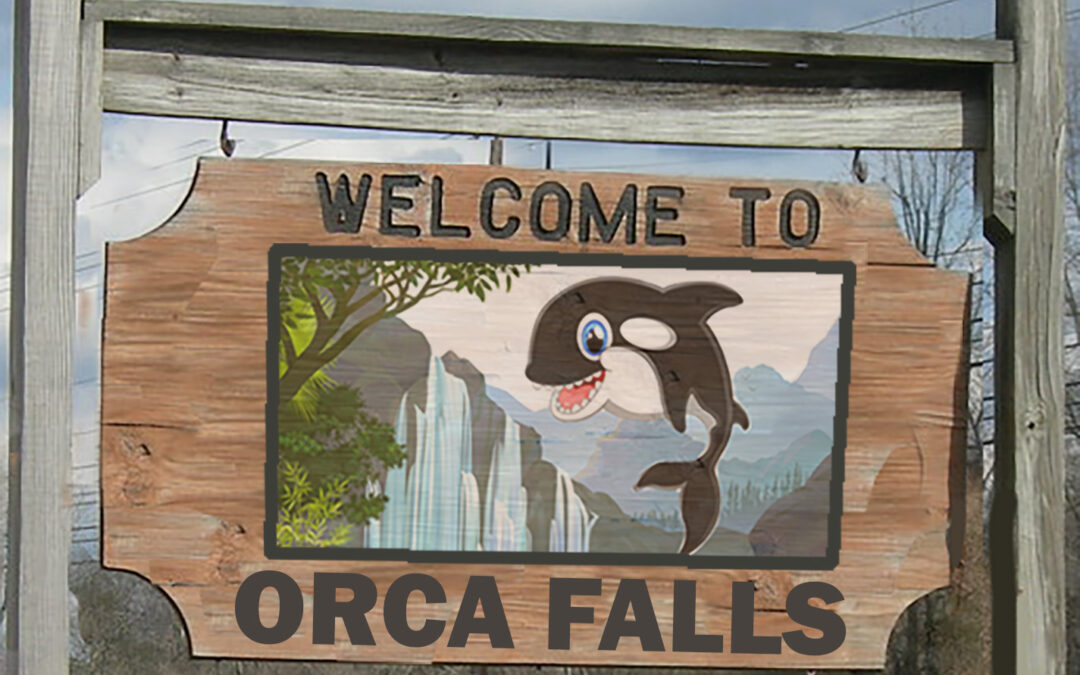 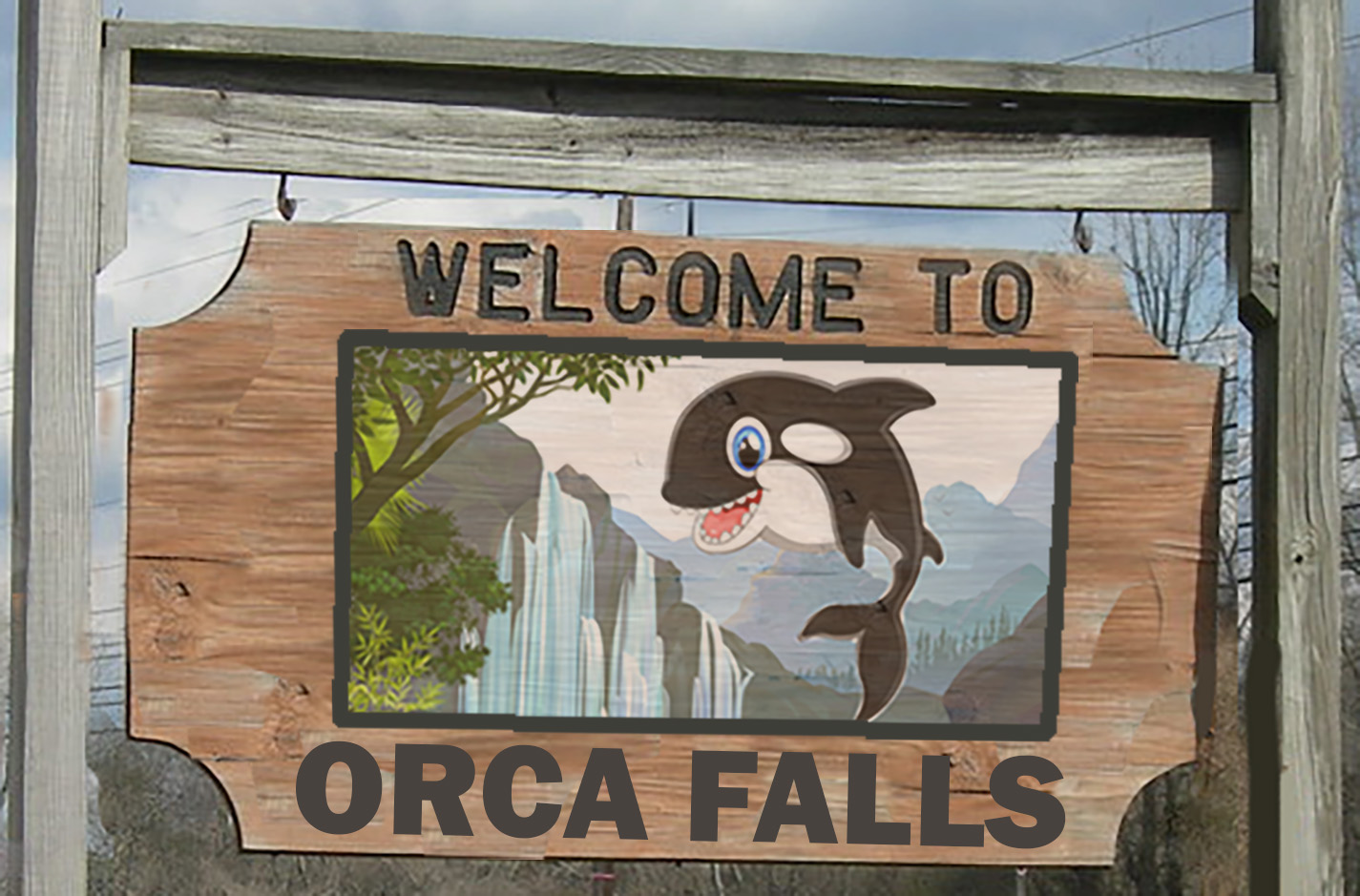 Welcome to Orca Falls (formerly Stanwood), the happiest town in America. Come for our incredible natural beauty. And if you’re lucky, you just might catch a rare sighting of one of our orcas swimming up our waterfalls, as they do during mating season.

I live on Camano Island in Washington state. There are no towns on the island and very few stores. To find a Starbucks, beauty salon, or tattoo parlor, you need to leave the island and head into Stanwood, the closest town. Like so many other small towns, Stanwood has been hit hard by the economic downturn caused by the COVID pandemic.

At the risk of offending the fine people of Stanwood, let’s face it. The town is not exactly a tourist mecca. It’s a hardscrabble, working-class community, whose stores are for the most part utilitarian and uninspiring. “Inviting” is not a word that comes to mind when you think of this place – unless you count Jimmy’s Pizza, which is always inviting – and full. When you think of a struggling small town like Stanwood, what comes to mind? Answer: Boring strip malls, a paucity of nice restaurants, and an unsettling number of “out of business” signs on boarded-up storefronts.

As my several million weekly readers will attest, I’m a humble man who is loath to boast about my impressive achievements. Heck, I never bring up my Nobel Prize unless you forget to ask. But it’s no secret I’m a nationally respected marketing / PR maven (because it says these words right on my business card). So, when Stanwood’s town council recently approached me for advice on how to turn around their flagging economy, I accepted my civic duty to save their town from disaster.

Now for some context. In the first half of the 20th century, there was a town called Leavenworth, nestled in the heart of Washington state’s Cascade Mountains. It was a thriving community with an economy based on logging. But by the 1950’s, the main railway had stopped serving Leavenworth, the logging industry collapsed, and the town came perilously close to bankruptcy. To avoid imminent financial ruin, the town reinvented itself into a Bavarian village, and all retail storefronts adopted a Bavarian theme.

Today it’s a bustling, highly sought-after tourist destination, annually drawing hundreds of thousands of visitors who apparently can’t tell the difference between an authentic Bavarian village and an IHOP restaurant dolled up with a lame Bavarian knock-off façade.

My point is this: What’s good for Leavenworth is great for Stanwood. When I think of the natural beauty of the Pacific Northwest, two things come to mind: breaching orca (“killer”) whales and craggy snow-capped mountains teeming with waterfalls. Admittedly, you might not think of these two things together, but just go with me, okay?

Ladies and gentlemen, WELCOME TO ORCA FALLS (formerly known as Stanwood). Doesn’t that sound charming? Of course it does. Forget about the Stanwood you thought you knew. It’s time to bring your family – and your credit card – to this heavenly, undiscovered Cascadian paradise we’ve rebranded to avoid foreclosure. 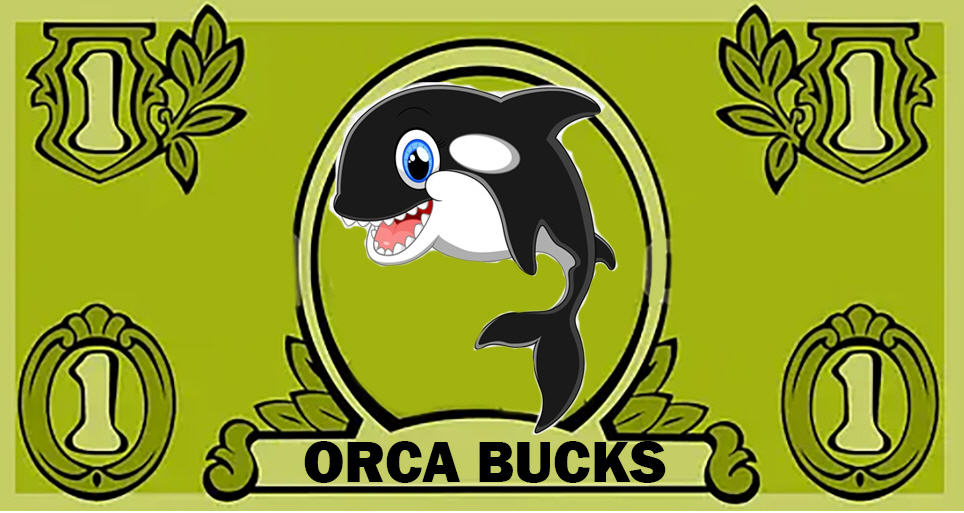 First-time visitors will receive $500 in ORCA BUCKS, which they can redeem at any participating store – sure to be a big hit! [Disclaimer: One Orca Buck = 1/100th of a penny.]

Are there really orca whales in Orca Falls? Technically no, but we’re working on it – just as soon as we can find a way to import 50 trillion tons of salt water – and a few dozen pods of orcas. And what about the towering waterfalls, you ask? Almost. We’re installing them as fast as we can. You’ll just have to visit to see for yourself.

As soon as the town council signs off on my modest $2.5 billion business development plan, before long, people will be flocking here like snow geese. Here are just a few of my brilliant plans for Orca Falls, which I am confident will win approval:

ORCA WORLD:  The largest – and only – amusement park for hundreds of miles, featuring the exhilarating Thunder Falls roller coaster ride and It’s a Small World. (I read that Disneyland is looking for a buyer for that ride). And we haven’t forgotten the kids. Make sure your youngsters get here early to beat the crowds waiting to ride on the backs of playful baby orcas – just be sure they jump off before the whale submerges. We’d hate to see them drown in such a magical setting.

For added fun, park visitors will enjoy imagining the sensation of being a salmon as they attempt to steer a rowboat upstream in the Ragin’ River Rapids ride. They will compete with other guests as they try to avoid being eaten by one of the park’s five adorably rambunctious grizzly bears. Don’t worry, our grizzlies are well-fed and wouldn’t hurt a soul – so long as you don’t make direct eye contact – or smell like salmon.

KILLER WHALE WAY: The town’s main street will be renamed and re-imagined with a fanciful whale theme. Store owners choose which whale image to carve into their storefront – orca, grey, humpback – or for a larger store, I’d go with a blue whale motif (it’s the largest animal on earth). Other storefront façade options include “Shipwrecked”, “Mutiny on the Bounty” and “Captain Crunch.”

Audiophiles will thrill to the soothing recorded sounds of whale clicks, whistles, and mating moans blasted at 150 decibels, sure to make you feel like you’re in the splash zone at Sea World (before they shut down the whale attraction on animal cruelty charges). 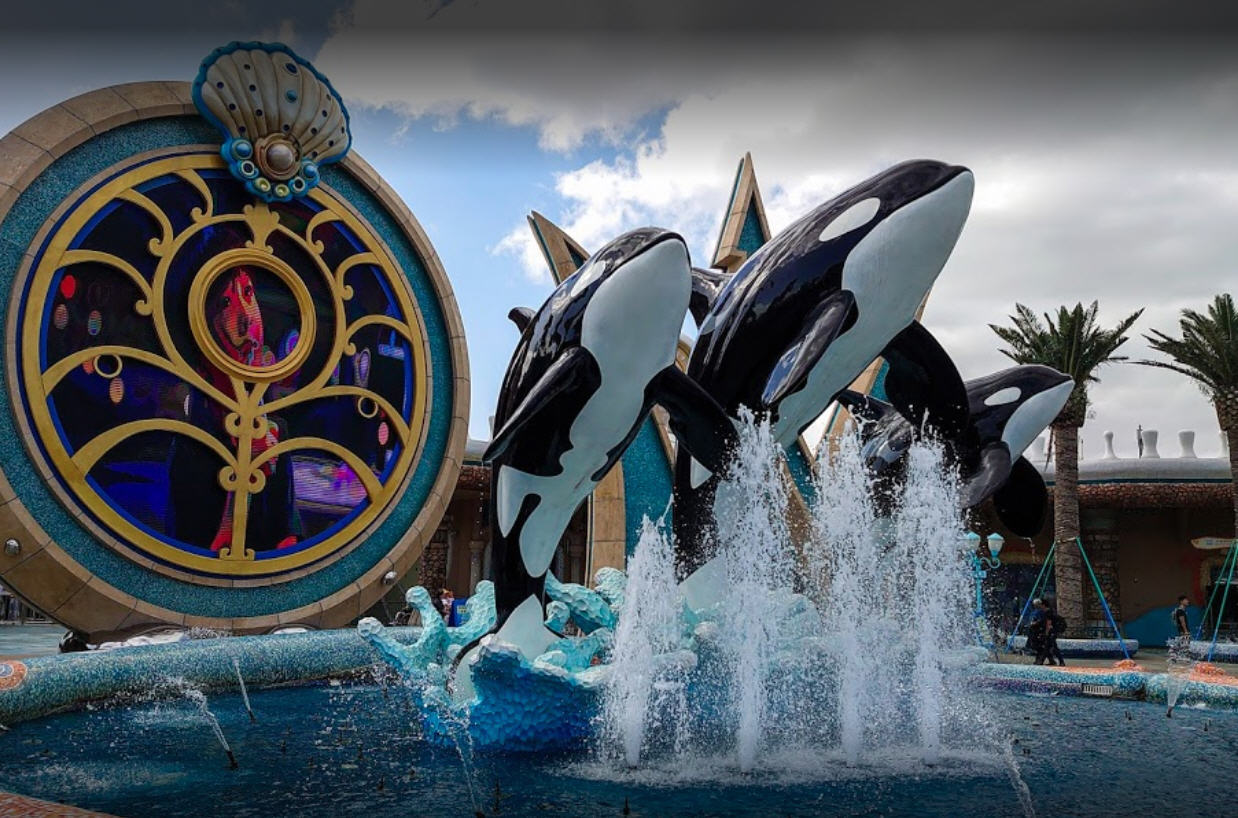 Visitors will thrill to the rides and shows at Orca World, where you will see our whales do things you never thought imaginable. [Park opening delayed indefinitely. Check back in summer 2031.]

BUBBLES’ BATH: There’ll be no shortage of fun at Orca Falls’ giant public indoor – outdoor wave pool “where kids will have a WHALE of a time!” (I just made that up – that’s called marketing.) Visitors will delight to the hourly “Free Willy” playtime, as killer whales are let loose to mingle joyfully among the unsuspecting swimmers.

I’m confident my scheme will turn the town formerly known as Stanwood into a world class destination – right up there with Monte Carlo or Scranton, PA (another one of my success stories). But in the unlikely event the town council’s members aren’t quite the visionaries that I am, I have a fallback rebranding plan:

Welcome to Eagle Canyon. Come for the Eagles. Stay for our world-famous Eagle Pot Pie. 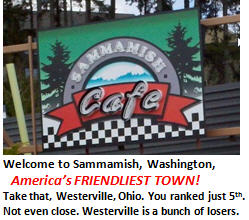 The nightmare of living in America’s friendliest town

You might think living in America’s friendliest town must be a fairy tale. Au contraire. It’s a living Hell. Forbes Magazine just came out with its ranking of the Friendliest Towns in America. Coming in at the #1 spot on their list? Sammamish, Washington, (true) my town for the past 22 years.

Sammamish beat out fierce rivals like Westerville, Ohio, Fishers, Indiana, Lake Wobegon, Hooterville, and the Merry Old Land of Oz for top honors. Forbes’s study ranked towns based on criteria such as crime rate, level of charitable giving, level of civic engagement, and the size of the check the town was willing to pay to Forbes Magazine to get listed as one of America’s friendliest towns.

Sammamish, a nice town of roughly 47,000 nice people, is nestled in the nice foothills of the Cascade Mountains – a convenient 20 minutes east of Seattle (or 2 hours and 40 minutes during rush hour). Thanks to its close proximity to Microsoft, Sammamish is an upscale community with low unemployment (5%), low crime (90% below the national average) and the nation’s highest level of double tall mocha addicts (97%).

Don’t get me wrong. The people of Sammamish are some of the nicest people you’ll ever want to meet. And that’s exactly the problem. They are really nice. Annoyingly, obnoxiously nice. By comparison, Mr. Rogers’ Neighborhood looks like the set of Real Housewives of New Jersey.