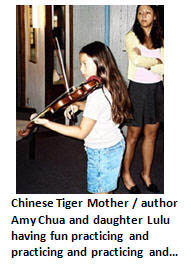 Last week, I talked about the breakthrough best-selling parenting book by Amy Chua called Battle Hymn of the Tiger Mother. If you missed it, you can get caught up here. That’s her on the left coaching her daughter Lulu with her violin practice.  They are going on day four without sleep, practicing Vivaldi’s Four Seasons Suite for Lulu’s recital at Carnegie Hall.

Amy Chua is a Chinese American and a Yale Law School professor who decided to raise her two daughters the traditional Chinese way. To describe her strict parenting approach as “spare the rod, spoil the child” is like saying jumping off a 1,000 foot cliff headfirst could result in an owie. She re-defines the meaning of the phrase “tough love.”

Since reading her book, I have wholeheartedly embraced Chua’s breakthrough parenting philosophy and am here to share with you my Six Simple Steps to becoming a Tiger Mom (or Dad). Follow these six steps to the letter, and before you know it, you will be amazed at the change in your child’s performance at school.  Get started today, and you can pretty much mail your child’s acceptance letter to Harvard in a couple months – unless, of course, she had her heart set on Oxford.

END_OF_DOCUMENT_TOKEN_TO_BE_REPLACED 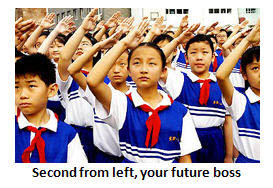 If you’re not a Chinese Tiger Mom, your kids will end up in prison (1st in a 2-Part Series)

If you’re like most parents, every now and then you probably wonder quietly to yourself “Am I a failure as a parent?” In the case of Howard Ryerson of Danville, VA, I hate to break it to you, but the answer is Yes, Howard, you are.

So for the rest of you out there, let’s find out just how good a parent you are by taking this amazingly accurate scientifically proven assessment to measure your parenting effectiveness.

Q2: Do you live in either the United States or Canada?

Q3: Are you Caucasian?

If you answered YES to all three of the above, then statistically speaking, you are almost certainly a TERRIBLE PARENT. In a few years your kids will most likely take a job asking people if they would like to Super Size it for 25 cents more. That’s the conclusion (I draw) from Amy Chua’s controversial new best-selling book, Battle Hymn of the Tiger Mother.

In case you’ve been without electricity for the past two months – perhaps you were rafting down the Amazon in search of a lost tribe – and you’ve never heard of this author or her book, let me be the first to welcome you back to Civilization. We’ve missed you.  That’s Amy Chua pictured at right, carrying her younger child, Lulu, into the jungle, where she will leave her for three days to fend for herself after failing to get 100% on her 8th grade science quiz.