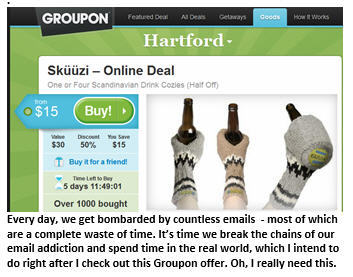 Don’t Let Email and Facebook Take Over Your Life

There is a growing problem in this country. It’s the bombardment of messages we receive virtually nonstop every single day, thanks to the increasing omnipresence of email, text messaging and social media in our lives.

Today I want to tell you how you can break free from the distraction of – hey look! An email from Ace Hardware. They’re offering 15% off hammers today only. How’d they know I needed a new hammer? Where was I? Oh yes, I was talking about the importance of staying in the moment and not letting outside email distractions cause us to get – Wow! My team is up by 10 at the half.  Thanks for the text, Sis. Go, Buckeyes!

My point is, we need to take back control of our lives and not let our laptops and smart phones dictate how we spend our time. There is nothing more important in life than – Adele’s latest tweet announcing, “I’m back with a brand new single. Watch the video now: http://trib.al/utC***z”.  Wow, that was awesome. She sure has a set of pipes….

As I was saying, too often we bounce from one distraction to the next when what we really should be doing is using our time to appreciate – this important email I just got from Donald Trump claiming that Ted Cruz is an idiot….

END_OF_DOCUMENT_TOKEN_TO_BE_REPLACED 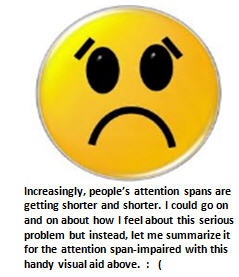 For the 15% of you still reading, let me explain. Thanks to texting, people now spell the words U and B4 because they don’t have the patience anymore to take the extra two seconds required to spell out you and before. God forbid the word might contain more than two syllables, such as a word like, well, syllables. People simply can’t be bothered – too many keystrokes. And when was the last time you wrote a personal handwritten letter? Let me guess. President Clinton was still dating Monica, right?

Thanks to Facebook, we have all become conditioned to posting micro comments on people’s “walls” which according to the Facebook Code of  Condensed Communication Conduct (FCCCC) must not exceed 24 characters. Say your family dog passed away after 18 years, and you decided to share your grief about your loss. Here is the response you would likely receive from one of your closest  friends:

1)     In 1974: Hey, I am so sorry to hear about the loss of your dear Golden Retriever Buster. I know that he was a family member to you. I hope you can be heartened in your time of grief knowing that he lived a good life. I hope you don’t mind but I baked you my homemade apple pie. I am always here for you. (This note would of course have been handwritten.)

END_OF_DOCUMENT_TOKEN_TO_BE_REPLACED 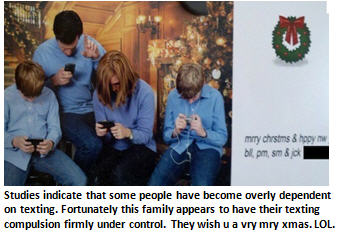 Important safety alert: The dangers of texting while breathing

by TEJ | May 31, 2012 | Computers and Technology humor, In the News Humor, Lifestyles humor

In our increasingly technology-bound culture, cell phone use has exploded over the past decade. A recent report indicates there are now more cell phones in the USA than people, and three times more cell phone users than Americans who can locate the United States on a map of North America.

Studies indicate that the dangers of cell phone texting extend far beyond texting while driving. Health experts have recently argued that texting should be avoided during any of the following “high-risk” activities: