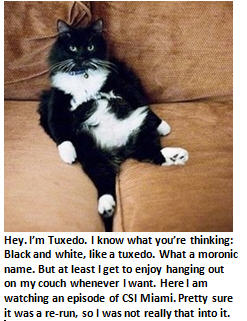 An important message from your cat

[This week, Tim Jones turns the keys to his blog over to Tuxedo, a 23-pound spokescat representing the views of household cats everywhere.]

Hey, owner. This is your cat. There appears to be a little confusion as to just exactly who’s in charge here. I know, I know. You pay the electric bill, pay the insurance (whatever that is), and you buy all the food. That does not make you king of my castle. I’m afraid I’m going to have to go over the ground rules one more time if I’m going to allow you to stay here.

I think we can both agree that I am pretty low maintenance. Heck, I sleep 20 hours a day, so the least you can do during the other four hours is drop what you’re doing and pay full attention to me – starting with my meals. I have to say a monotonous diet of Meow Mix day after day is not exactly my idea of haute cuisine. And what’s with the dry food pellets? Do I look like a rabbit? Please have your chef start preparing more interesting entrées for me. Might I suggest steak tartare or perhaps Lobster Newburg?

While we’re on the subject of dining preferences, need I remind you that the toilet is mine? Its primary function, we both know, is as the receptacle for my drinking water. I’m willing to let you share, but for God’s sake please make sure little Princess Sarah remembers to flush after she tinkles. It’s gross. You don’t see me taking a pee in her sippy cup, do you?

END_OF_DOCUMENT_TOKEN_TO_BE_REPLACED 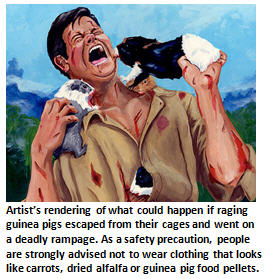