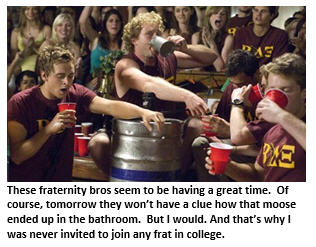 I Have a Drinking Problem

I simply don’t drink. Never have. And that’s created many an awkward social situation my entire adult life. A lot of people have difficulty accepting this aberration – starting with my young adult daughters. In their college years, they attended many a party and chugged many a beer. “It’s what you do at college” they claim. Thus, they refuse to believe that spirits never pass over my lips. Nobody could be that much of a boring, uptight nerd, they argue, convinced I must be keeping from them deep dark secrets about my past.

I attended a university where so many students regularly drank themselves into oblivion, that I started to wonder if it was a pre-requisite for graduation. The entry requirement at most fraternity parties was to chug a pitcher of beer upon arrival. Apparently, it was a violation of the Greek code of ethics to be on frat premises without consuming large quantities of alcohol. The only permissible exception was if you’d already passed out in the hall closet.

Even now, when I go to a gathering, people just assume I’ll be drinking, like everyone else. The beverage selections typically are two red wines, a Zinfandel, three types of beer, vodka, bourbon, and club soda. Invariably, when I mention that I don’t drink, people assume the worst: I’m an alcoholic trying to stay on the wagon. When I clarify that it’s not that, they assume the even worster: I’m a holier-than thou Prohibitionist who looks down my nose at these sinners whose weak moral failings have led them the bottle. Excellent guesses, everybody, but no, that’s not why I don’t drink (although, yeah, drunken, two-timing Charlie over there making out with the fern is probably headed south when his number is up).