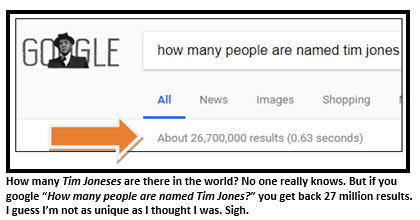 The Downside of Having a Common Name

Allow me to introduce myself. I am Tim Jones. I’m unique – just like the other 58,730 people in the world with the exact same name. No, wait. I’ve just been informed that another Jones family in Topeka, Kansas has christened their newborn Tim. Okay, so make that only 58,731 Tim Joneses.

Having such a common name is more of an annoyance than you might think. First, it is utterly uninspiring. Do you recall the Civil War hero Tim Jones? Or the movie star? I thought not. Great men throughout history possessed distinguished, memorable monikers – like Alexander the Great and Stonewall Jackson and Winston Churchill – not that I’d have preferred being a “Winston”, mind you. But you get my point.

It’s just that the typical response to hearing the name Tim Jones is an irresistible impulse to yawn. Let me prove my point with a short story:

Once upon a time there was a poor, old Italian fisherman. Every day he would row his crusty rowboat out to sea, in hopes of catching just enough fish to feed his family. He did this for several years, fighting the high winds and rough waters, until finally, he no longer had the strength to do it anymore. So, he decided to retire, began collecting social security and moved to a condo in Arizona to be close to his grandkids.

Okay, that’s a pretty lame story. But let me ask you a question: If you had to guess, what would you say was the fisherman’s name? Take your time. Aha! I bet you concluded it probably was Tim Jones! Didn’t you? Wrong. The fisherman’s name was Antonio Vespucci. Why in the world would an Italian fisherman be named Tim Jones? Not exactly a Sherlock Holmes, are you? Which reminds me, now that’s a memorable name! But I digress.

My last name is so prosaic that my own wife, a world-class artist, opted to keep her own – refusing even to hyphenate it as Rushworth-Jones. And who could blame her? Which would you rather own, an original Rushworth painting or an original Jones? It’s kind of an oxymoron anyway – an original Jones. END_OF_DOCUMENT_TOKEN_TO_BE_REPLACED