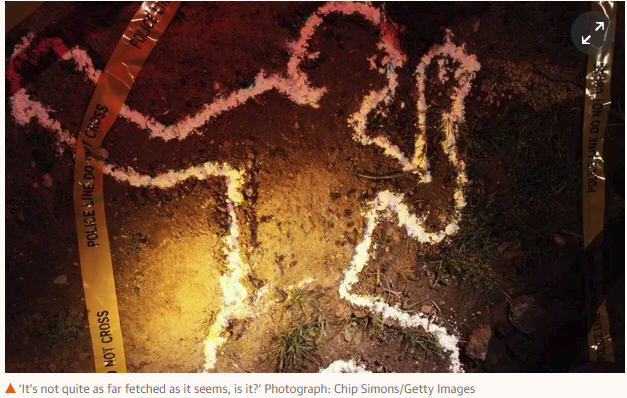 If Trump shot Michael Cohen in broad daylight, here’s what Republicans would say

[Note by Tim Jones: This week’s column was written by Lawrence Douglas and Alexander George.]

You can just imagine the tweets, denials and equivocating that would follow a murder committed by Trump on Fifth Avenue, can’t you?

Breaking news: in an eerie echo of Donald Trump’s infamous campaign trail remark – “I could stand in the middle of Fifth Avenue and shoot somebody and I wouldn’t lose voters” – many witnesses report, and CCTV footage obtained by the Times confirms, that early this morning the president drew a handgun on his former lawyer Michael Cohen and shot him dead on a street in midtown Manhattan.

“If these reports are true – I emphasize IF – then yes, I’m very concerned. I don’t think the president should be killing people in broad daylight in front of Tiffany’s. But I’m not a legal expert, I could be wrong.”

Associated Press: “Ms. Sanders, did the president shoot his former lawyer in an effort to stop him from testifying against the president?”

AP: “Are you saying that the shooting was not motivated by Mr. Cohen’s recent plea deal, or rather that the president did not shoot him?”

SHS: “The answer is no. No as in no. N. O. It’s these kinds of questions that have turned the American people against the press.”  END_OF_DOCUMENT_TOKEN_TO_BE_REPLACED