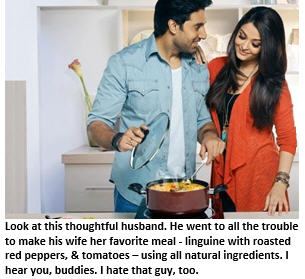 In our house, my wife does a lot of the cooking… okay, most of the cooking… okay, all of it. I’d gladly do more.  I don’t claim to be the world’s greatest culinary expert, but I can microwave a six-minute Stouffer’s Mac N’ Cheese like the best of them. For some inexplicable reason, though, my wife does not consider that “making dinner.” She once had the nerve to tell me toasting two frosted cinnamon pop tarts does not constitute “preparing breakfast” either. She’s so unreasonable.

There are millions of husbands who love the challenge of preparing sophisticated haute cuisine meals using exotic ingredients like foie gras and arugula, with a side of home-made Dijon-pepper sauce. I’m just not one of them. I never grasped the appeal of laboring for an hour to prepare a lavish feast that I will scarf down in fifteen minutes, only to spend another 45 minutes cleaning up the four pots, five bowls, and nine ladles required to turn my kitchen into a disaster area.

Hey, I can prepare a home-cooked meal every bit as well as the next husband who has never cooked one. But recently, my wife decided it would be a good thing “for our relationship” if I were to pitch in more in preparing our dinners. She presented a ridiculously lame argument about how she has been making the meals for our family for the past thirty years. I countered with a much more cogent argument about not messing with a good thing. Surprisingly, she didn’t take that as a compliment. In my defense, I handle all the clean-up after every meal. And I try extremely hard to make sure I whine about it out of ear shot of my wife.

But my wife is no dummy – despite evidence to the contrary in the form of her decision to marry me. She had signed up for a service called Home Chef, which sends you a box filled with all the ingredients pre-measured to readily conjure up fancy meals like Salmon in Brown-Butter Tomato Relish or Sumac-Spiced Steak & Butternut Squash. Nowhere on their list of entrée options could I locate Chili Dogs with Fries. Go figure.