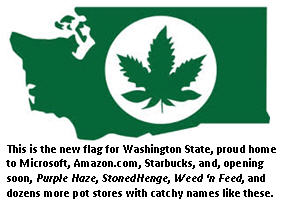 The perils of living in a state of stoners

Recently two states legalized the recreational use of marijuana: Colorado and my state, Washington. And as a result, their football teams (Seattle and Denver) are headed to the Super Bowl.  That’s why I enthusiastically voted for passage of this law.  And I want to apologize for my decision. I had no idea that legalizing weed would unleash a tidal wave of chaos, lawlessness and nonstop ESPN clips of Richard Sherman ranting that he is the best corner back in the history of the universe.

For years, my parents, my minister and my 7th grade science teacher, Mr. Curtis, warned me about the dangers of marijuana. The critically acclaimed 1936 documentary film Reefer Madness proved conclusively that even a single puff of marijuana could lead to a life of heroin addiction, crime and attempting to French kiss nuns during mass.

The evidence is overwhelming that prolonged marijuana use can interfere with one’s ability to concentrate and inhibit one’s motivation. In a 1987 study of rhesus monkeys, researchers found that those monkeys who had routinely inhaled marijuana over a six-month period displayed no motivation to accomplish anything constructive, instead opting to lie around and pick fleas out of their fur. Critics of the study’s findings argued: “What did you expect? Were you waiting for them to draw engineering plans for the next space shuttle? They’re rhesus monkeys, for fuck’s sake.” Critics of legitimate scientific studies often use very coarse language.