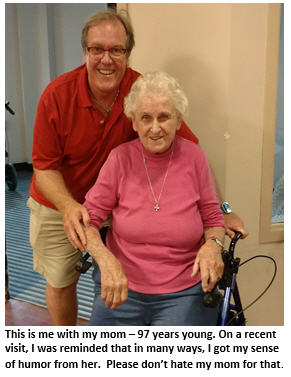 My Visit with Mom

Recently, I flew across the country from Seattle to my hometown of Albany, New York, to spend a few days with my elderly mother. While my father died relatively young (at age 64 – a year older than I am now), my mom is like the Energizer Bunny. At 97, she keeps going and going and going.

Well, maybe not exactly. She now needs hearing aids in both ears, her short-term memory has declined significantly, and she is legally blind, able only to make out shapes and colors but with no detail. And she needs a wheelchair to make it any further than two feet. But otherwise, she is doing amazingly well.

While my mother knew I was coming to town, she kept forgetting exactly which day I’d be arriving. So, when I knocked on her room door at the nursing home facility, I entered the room only identifying my presence by saying “Special Delivery for Betty.”  She got momentarily confused, not knowing who was calling on her.

I proclaimed I had a special order of Peanut M&M’s (her favorite candy), but she was still unsure about who was bringing her this surprise. She guessed a few names before I gave her a hint: “It’s your fourth son, Tim!” Suddenly, she lit up like a Christmas tree and hugged me like my visit was the return of the prodigal son.

Her fragile frame, once 5’3”, now barely reaches 5’. But her smile is still radiant. I would be visiting her for the next six days, and all I wanted to do was be there with her and to hopefully add a little sunshine for a few precious days.

END_OF_DOCUMENT_TOKEN_TO_BE_REPLACED 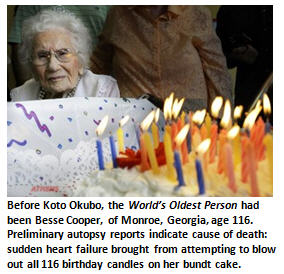