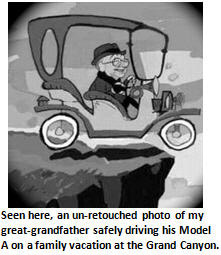 Back away from the car, mom, and give the car keys to Grandma

It was not too long ago that I held a deep-seated prejudice. No, I am not talking about my longstanding hatred of Hungarians, nor my antipathy towards vegetarians, nor even my heated disdain for anyone who earns more money than I do. I’m, of course, talking about my bigotry towards the elderly. Until quite recently, I lived under the misguided belief that old people tended to be poorer drivers and should have their driver’s licenses revoked once they turned 80.

In fairness, I have some supporting data to back up my bias. My grandfather did not stop driving until he was 86. In his later years he rarely used his turn signal, usually opting to indicate his intentions with his windshield wiper lever instead. He thought STOP signs were for pedestrians.  My mother, now age 90, only turned over the car keys at age 85 when she attempted to park her car in her own garage. That wouldn’t have been a problem except for her small oversight of forgetting to raise the garage door before entering the garage.

So imagine my surprise when I read about a new study this week that shows that grandparents are far safer drivers than parents when kids are in the car. In fact, the study conducted by State Farm Insurance involving claims for collisions between 2003 and 2007 concluded that kids are 50% less likely to become involved in an accident involving injuries when a grandparent is driving than when a parent is behind the wheel.