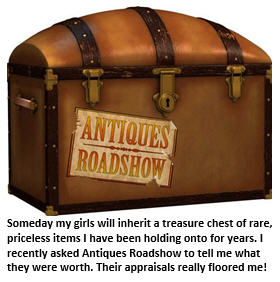 I’m the proud owner of an extensive collection of priceless one-of-a-kind heirlooms, some of which I’ve owned since early childhood. Recently I decided to find out what they were worth. No doubt hundreds of thousands of dollars. So, when I heard that Antiques Roadshow was coming to Seattle, I knew this was my chance to determine conclusively just how valuable my rare compilation of artifacts was. The following is a transcript of my conversation with the appraiser on Antiques Roadshow.

Tim: Love your show. Big fan. By the way, I recently wrote this book called YOU’RE GROUNDED FOR LI-

ARS: We really don’t have time for you to shamelessly plug your book.

Tim: Why not? After all, this is my humor blog.

ARS: Pardon me? Okay, what is it you have to show me, sir?

Tim: I have this rare coin my father gave to me when I was five years old. I think it might be ancient Mesopotamian, probably from the 5th century BC. It appears to be in really good condition. What would you say it’s worth?

ARS: Well, sir. I agree this coin is in excellent condition. However, on closer inspection, it appears that it does not date quite as far back as the 5th century before Christ. I would date it, instead, to sometime around 1960. It appears to be a New York City subway token. Notice here, where it reads “Good for one fare” – in plain English.

Tim: Well, that’s disappointing. Okay, well, how about this item, then? I think it might be a rare impressionist painting. I can’t really make out what it’s supposed to be about. But my mom had it posted on our kitchen wall when I was very young. It looks to me it could be an early Monet or maybe a Van Gogh. Do you recognize the artist?

ARS: Hmmm, I’m sorry to say, I don’t, sir. But look here on the back – there appears to be some sort of signature. I glean the letters “T-I-M-M-Y” scrawled in reddish orange crayon. Does that name mean anything to you?

ARS: Intriguing. You don’t think by any chance this might be one of your childhood finger paintings, do you? Perhaps from when you were, say, two or three years old?

Tim: Hah! I had not thought of that. But how can you be so sure it’s not something by one of the early Impressionists? END_OF_DOCUMENT_TOKEN_TO_BE_REPLACED