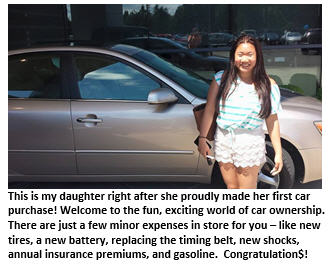 Recently I helped our younger teenage daughter, Emmy, purchase her first car. She had no idea how much used cars cost. I think she was hoping to afford a slightly used Lexus. What she got instead was a lesson in how much cars actually cost. Emmy hates it when I mention her by name in my blog, so I will just call her “Miss Enthusiasm” – “M. E.” for short.

When we started this process, like a lot of young people, Emmy’s, I mean M. E.’s concept of buying a car was rather simplistic: You buy a Japanese luxury car on Craigslist from someone you’ve never heard of named Vinny for a few hundred dollars. Your only ongoing expense is the gasoline fill-ups required four times a year. Period, the end. More esoteric concepts like collision & liability insurance, vehicle registration, tire rotations, oil changes and other routine maintenance were vague abstractions that she had never quite grasped – mainly because she invariably tuned out my relentless attempts to explain the substantial ongoing costs of vehicle ownership. I apologize, M.E., for intruding upon your much more fascinating texting conversations with Haley on more important topics like whazzup.

When the time finally came for her to look for a car, I told M. E. I would contribute up to $3,000 towards the cost. Anything beyond that – including insurance was her responsibility. The only part I am sure she heard was the part of about me paying $3,000 – which is really all she needed to know, because she was pretty sure that figure would be enough to get her that brand new 2015 Lexus LS she saw on TV. I explained to her that cars cost a lot more than she imagined, so she reluctantly lowered her sights towards a used car – specifically the 2013 Lexus LS – ideally with the Bose surround-sound stereo system and the chrome wheel package. I could tell I was in for an exhausting couple of days.