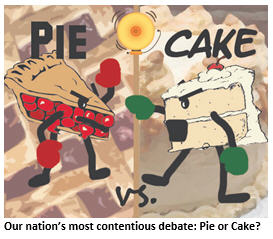 If you love America, then in this food fight you’d choose cake. Oh sure, pie was pretty cool once – back in the 1920’s, sitting on the window sill of your great grandmother’s kitchen. But wake up. It’s 2018. Pie is so 20th century. If you ask me, pie is nothing more than a glorified, overstuffed pop tart. Cake, on the other hand, is almost a euphoric experience. You think I’m half-baked making that claim? Then you’ve never tasted red velvet cake. What a pitiful life you must lead. END_OF_DOCUMENT_TOKEN_TO_BE_REPLACED