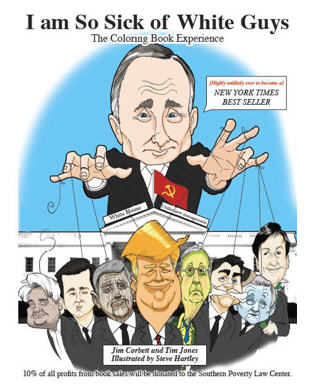 Tim Jones, the humor writer behind View from the Bleachers and the book, YOU’RE GROUNDED FOR LIFE, recently published a new book called I am So Sick of White Guys – The Coloring Book Experience, with his co-author and fellow humor writer, Jim Corbett. The book is available for $10.00 on Amazon.com.

The book has even been featured on USA Today. When asked why they wrote the book, Corbett responded, “the political and social situation has become so confounding and so upsetting lately that even white guys are now sick of white guys!”

Corbett and Jones worked with artist Steve Hartley (all from just north of Seattle) to create a collection of cleverly rendered images that clearly capture the current cultural climate and skewer some sacred cows from history, as well. Each image is accompanied by witty, sarcastic and, yes, sometimes even snarky comments that just might be the elixir you need to help you cope with what is happening to the greatest democracy the world has ever known. (Remember when our elections were decided by that insane thing called the ‘Electoral College,’ instead of that even more insane thing called, ‘Russia?’)

Some people have suggested this might not be a good time for a book such as this, but co-author Corbett disagrees saying, “There is a long and healthy tradition of political satire and parody in the United States, and we believe there is no better time than right now to make sure the voices of hatred and exclusivity are turned back.”

Jones supported that sentiment pointing out that, “In order to make sure this book is not mistaken for a vehicle of intolerance, ten percent of the profits are being donated to the Southern Poverty Law Center, which devotes its efforts to opposing hate groups.”

Humorist Tim Jones Interviewed About his Humor Book on Parenting

In spring 2017, Humor writer Tim Jones was featured on a podcast of Dad Spotlight to discuss his parenting book, YOU’RE GROUNDED FOR LIFE 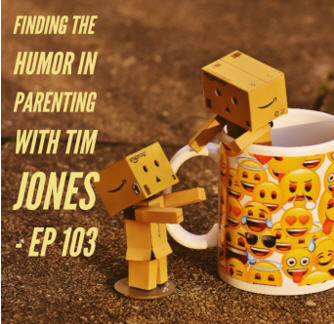 In spring 2017, Humor writer Tim Jones was featured in an audio interview by Christopher Lewis, host of the popular podcast series Dad Spotlight, a weekly podcast program that features dads talking about their experience in the never-ending challenge called parenting. Tim was interviewed based on the popularity of his humor book on parenting called YOU’RE GROUNDED FOR LIFE – Misguided Parenting Strategies That Sounded Good at the Time”.

The host asked Tim a series of questions about his biggest challenges as a parent, his biggest joys and of course, his biggest mistakes. You can hear the entire half-hour interview here.

Tim reminded the interviewer that he is widely regarded as an incredibly thoughtful, brilliant parenting expert – as long as you do not ask his wife or his kids. In his book he does bring in a number of the stories that he had written in the past and he chose the

Tim Jones mentioned that he started writing humor through his annual “year-in-review” Christmas letter. His wife was the one who encouraged him to start his blog after they watched the movie Julie and Julia, a movie about a woman who decided to do a blog based on Julia Child’s recipes. For his own humor writing, Tim shared that it is important that when he writes about parenting and humor: 1) make it authentic, 2) write about stuff you know from your own experience and 3) poke fun at yourself first and foremost, because nobody can take offense when the object of the ridicule is yourself.

When asked about some parenting tips for other dads, Tim reminded the host that he was a humor writer, not a parenting expert. But he shared in this interview the importance of modeling the behavior and values you want your kids to (eventually) internalize.  As for humor, Tim shared that too many people take life too seriously, so he often tried to be light in his approach to parenting when his kids were you and he looked to find the humor even in some very frustrating parenting challenges.  When asked to share some of his own personal favorite blog posts he’s written about parenting, the follow two came immediately to mind:

Listen to the entire interview.>

Jones Does Book Signing for His New Humor Book on Parenting 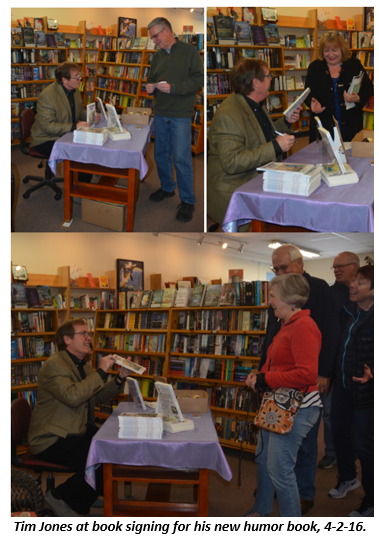 Humor writer Tim Jones was invited to be a guest author at Snow Goose Books in Stanwood, WA to sign copies of his new humor book on parenting, YOU’RE GROUNDED FOR LIFE – Misguided Parenting Strategies That Sounded Good at the Time”

People came from nearby communities to this popular historic bookstore in downtown Stanwood to buy their own autographed copy of his humor book. As he signed copies of the book, Jones regaled the book store visitors with some of his actual stories about parenting two high-spirited daughters, which helped inspire the book.

When asked by one customer, “What do your daughters think of the book?,” Jones replied, “Oh, I am quite sure neither of them has read it. If it’s longer than a Facebook post, they don’t have time for it – like most young people today.” Jones looks forward to his next book signing event before thousands of excited fans at the Barnes and Noble store in downtown Manhattan, just as soon as someone from Barnes and Noble returns his call.

In the meantime, Jones said he will just keep writing his weekly humor blog until his wife tells him “enough is enough.” Jones plans to write another book perhaps as soon as next year but has not decided on the topic yet. “It’s hard to say which subject I should write about – how to be a successful business entrepreneur or perhaps something about healthy eating and fitness,” he said. “It’s hard to choose, seeing as I know so little about either of these topics.”

Copies of YOU’RE GROUNDED FOR LIFE are available for purchase as a paperback at Snow Goose Books or online as a paperback or eBook at Amazon.com, BarnesandNoble.com, Lulu.com and other resellers. Learn more here.

Tim Jones is a humor writer based on Camano Island, WA, whose weekly humor column, View from the Bleachers (www.ViewFromTheBleachers.net) appears in a variety of online humor sites, including The Seattle PI, HumorOutcasts.com, GlossyNews.com and various print publications, including Funny Times. His column is also a regular feature of the Crab Cracker newspaper, serving Camano Island and Stanwood, WA. He has been a humor writer since 2009, having written close to 300 essays on topics ranging from parenting to politics to pop culture.

Jones gave a talk at the Camano Island Library, sharing how he became a humor writer, how he approaches the process of humor writing, and the importance of taking risks as a writer. “If I’m not offending anyone with my humor writing, then I’m not trying hard enough,” said Jones, adding, “I refuse to write for the slowest person in the room.”

He also talked about how he comes up for ideas for his humor, often from what he called “tiny stories in the news.” He shared, “I once heard a news snippet on NPR about a prison in Argentina that, forced to make drastic budget cuts, replaced a guard in one of its guard towers with a soccer ball. That became the basis for my satirical essay, My solution to America’s prison problem – Soccer balls.”

Jones also talked about the importance of deciding on which voice you are writing from when writing satire. He has written using a wide variety of voices, including a know-it-all expert (who really has no idea what he’s talking about), a complainer for whom nothing is good enough, a back-and-forth dialogue as in a play, a news reporter or even an over-the-top TV commercial pitchman.

Jones read for the audience one of his View from the Bleachers essays called The Island of Exceptional People, about his experience moving to Camano Island. When he first arrived, he discovered the entire island was populated with scores of artists. It was a community in which everyone seemed creatively talented in multiple ways – a phenomenon which in his story he described as being “extremely annoying” and the cause for untold stress for his pangs of inadequacy.

Jones also talked about his new humor book on parenting called YOU’RE GROUNDED FOR LIFE – Misguided Parenting Strategies That Sounded Good at the Time. In describing why he wrote the book, Jones explained, “I saw a severe paucity of bad parenting advice books. I felt nobody could fill this gap better than I could.” Jones made it clear this is NOT a parenting book. In fact, he shared, if anything, it’s a book about how NOT to parent, based in part on his experiencing raising two-high-spirited daughters. YOU’RE GROUNDED FOR LIFE is available as either a paperback or an eBook at Amazon.com, BarnesandNoble.com and Lulu.com and is downloadable at iTunes. 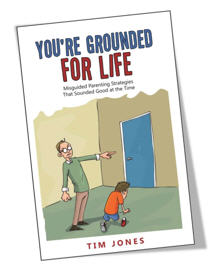 For more information about Tim Jones and YOU’RE GROUNDED FOR LIFE check out ViewFromThe Bleachers.net or to inquire about book signings or speaking engagements, contact Tim Jones or Donna Cavanagh of HO Press.

I Am So Sick of White Guys

A bitingly hilarious political satire coloring book — the perfect gift to infuriate that special Trump supporter in your life.

YOU'RE GROUNDED FOR LIFE 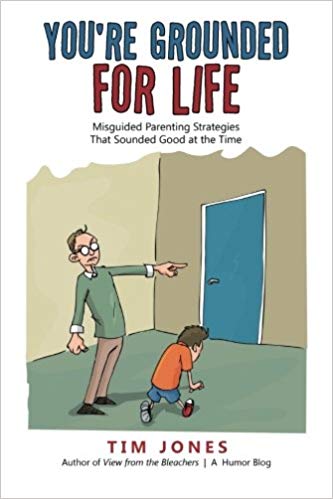 Read this hysterically funny book about Tim Jones’s many parenting failures — Sure to make you feel like Parent of the Year by comparison.