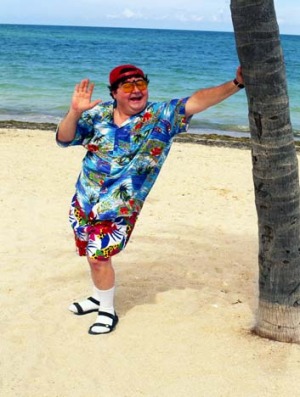 So you’re on vacation in Mexico, but you don’t know a word of Spanish. Let me help you out. For starters, if you’re thirsty for a local beer, you might not want to ask the bartender, “Do you have Corona?” Be safe and ask for Dos Equis instead.

It was 10pm at night. We had just arrived, exhausted, in La Paz, Mexico. We were about to spend ten relaxing days on vacation at a charming seaside resort on the Sea of Cortez. Ah, paradise awaits us. A gracious young Mexican hotel staffer assisted us with our luggage and showed us to our room before he bid us a pleasant goodnight.

As I attempted to tell him “goodnight” in Spanish, I suddenly had a deer-in-the-headlights moment. I haltingly fumbled my response, awkwardly uttering “um, Buenos Nachos, señora.” My wife quickly pointed out that I had just told the young man “Good Nachos, ma’am.” That might explain the confused expression on his face as he walked out the door. I meant to say “Buenas noches, señor.” In my defense, it turns out that the resort’s restaurant, I would later discover, did in fact serve very tasty nachos. So in a way, I was eerily correct in saying Buenos Nachos.

Truth is I hadn’t studied up nearly enough on my basic Spanish before our trip. To help you avoid an embarrassing faux pas like mine, let’s review some basic lessons in Beginning Spanish. This should assist you greatly the next time you’re planning on traveling to Mexico – or hiring a roofer to replace your roof.

I have to admit, I was a bit disappointed to discover that most Mexicans primarily speak Spanish… all the time. Many of them are shockingly limited in their English vocabulary. So, if you find yourself drawing a total blank on how to converse in Spanish, don’t worry. Do what I usually do. Just speak confidently and loudly in plain English while laying on your thickest Ricky Ricardo Spanish accent. Eventually, in many cases, the local will get so annoyed that they’ll start responding in English. Problem solved.

One of the nice things about the Spanish language is that many of its words are similar to the English word for the same thing. For example: We say “romantic.” In Spanish, they say “romantico.” We say “fantastic.” They say “fantástico.” I say, “Do you have any weed?” They say, “Estas bajo arresto,” which loosely translates to “you’re under arrest.” Turns out undercover police in Mexico don’t have much of a sense of humor when it comes to drugs.

At some point, your attempts to explain your request for assistance in loud English with a bad Spanish accent may not be enough to engage in a successful exchange. As unfair as it sounds, you’ll probably need to learn a few useful expressions to get around. Here are a few beginning phrases that may come in handy on your next adventure to Mexico:

“¿Conoces algún buen restaurante cerca?” >> “Do you know of a good restaurant nearby?”

“¿Dónde está el hospital más cercano? Creo que me rompí el brazo golpeando una piñata.” >> “Where is the nearest hospital? I think I broke my arm swatting at a pinata.”

“Por favor perdoname. Cuando le pedí sexo a esa mujer, no me di cuenta de que era tu esposa” >> “Please forgive me. When I propositioned that woman for sex, I did not realize she was your wife.” 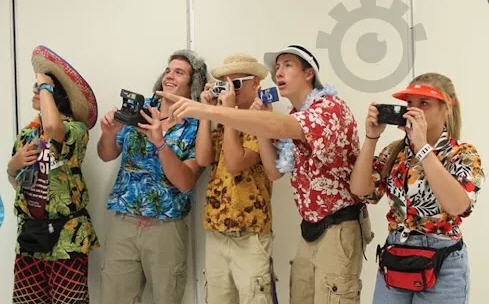 See these American tourists? They just arrived in Mexico, but none of them speaks the language. That became a problem when Charlie (in the red Hawaiian shirt) tried to explain to the waitress that he is 32 years old. He meant to say, “Tengo 32 años.” But what he actually said was, “Tengo 32 anos:”: “I have 32 anuses.” It went downhill from there.

Sometimes, if you can’t think of the appropriate Spanish word in the moment, you might try inserting a French or Italian expression instead. As they are all Romance languages, oftentimes, the word you’re looking for is similar.

Let’s say you’re in Puerto Vallarta, and you’re in the mood for Chinese food. You want to ask the local for the name of a “good Chinese restaurant.”

If you’re in a jam, there’s always Google Translate to the rescue. You simply type what you want to say in English, and voilà (that’s French). Your phone’s Google Translate app can instantly transcribe your English message into any one of over 100 languages. Truly incredible.

The next time you’re in, say, Peru, and you want to buy an authentic handmade Peruvian hat from one of the local street vendors, don’t worry if you can’t think of the right words. Just type into Google Translate, “I love this hat. How much does it cost?”

Then show your phone to the merchant and watch as they read the following phrase, complete with accent marks: “Unë e dua këtë kapelë. Sa kushton?”

Notice how they suddenly appear to be confused, raise their voice, gesticulate wildly, and shout in your face, “no tengo idea de lo que acabas de decir”. Your wife quickly pulls you aside and informs you that they said, “I have no idea what you just said.” But don’t panic. Just look at your phone. Notice how you accidentally had the translation set to Albanian. No problema, amigo.

If all else fails, you will want to memorize these two words: “¿habla Inglés?”

You’ll get the hang of it eventually. Maybe not this minute. Maybe not today, but no doubt by bañana – which my wife just pointed out does not mean tomorrow in Spanish. She gently added, “The word you’re looking for is mañana – you idiot!”

If it all feels just a little too overwhelming trying to learn Spanish before your next vacation, then the first time you come across a local and you have no idea what they just said, just smile. Point to your wife. Let her do the talking. Clearly she’s way better at this than you are.

That’s the view from the bleachers. Perhaps I’m off base. Or as they say in Mexico, “Esa es la vista desde las gradas. Quizás me equivoque.”