The Burden of Being a Good Sport 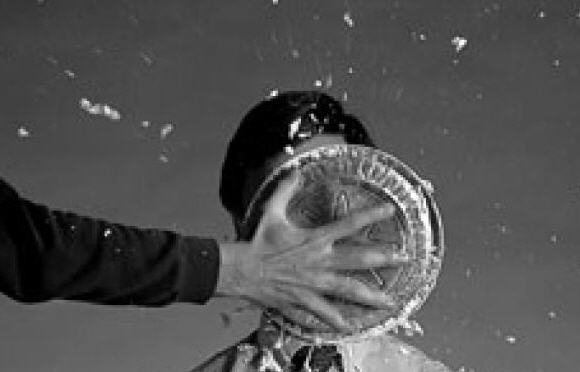 If you look up “Good Sport” in the dictionary, it should simply show a photo of me getting hit with a cream pie, then smiling afterwards and saying, “Man, you guys got me. Well played.” It’s a part of my quirky personality and the reason my kids refuse to be seen with me.

I’m not the most handsome man in the world, nor the smartest, nor the most successful at business. But there is one area where I shine: I’m a good sport. I can take a practical joke in stride, laugh it off, and not seek revenge (most of the time).

Throughout my entire adult life, friends and co-workers have delighted in pulling practical jokes on me or otherwise looking for ways to thrust me into embarrassing situations. They know I‘ll laugh along with everyone else at my very public humiliation. I really don’t really mind. I believe that they’d never attempt these stunts if they didn’t like me. Or maybe they viewed me as an easy mark. Yeah, now that I process this further, the latter explanation is starting to make a lot more sense to me.

Ladies and gentlemen: the stories you are about to hear are true. Only the names have been changed to protect the not-so-innocent.

In my freshman year at UVa, my dormmates signed me up for a computer dating event without my knowledge. I was understandably mystified to receive a letter that I had a date scheduled for Friday evening, since my social calendar was wide open from September through the end of Spring semester. I donned a suit and tie and went to the dance to meet my mystery match.

30 minutes into our first (and this may surprise you, our LAST) date, this guy storms in, gets in my face, and shouts, “That’s my fiancé, buddy. This date is over.” Apparently, the two were indeed engaged and thought it would be fun to see who they each got matched up with. Lucky me. I just wish I had had the presence of mind to have a snappy comeback like, “Hey buddy, she may be your fiancé but tonight she’s MY date. So take a number.” Several hilarious snappy comebacks would come to mind after our aborted date. But I didn’t say anything in the moment because, um, I was a good sport.

I was pretty OCD about grades in college, and often pulled all-nighters to cram for final exams. After one such ordeal, I came back to the apartment and collapsed on the couch. I was dead to the world when my roommates (Larry, Assad, and Bill) hovered over me and clapped loudly. As I came to in a fright, they snapped a photo. Ok, ha ha.

Well, two weeks later, I find Larry, Assad, and Bill huddled around our 13” black & white TV. They appeared rivetted. I asked what was so newsworthy on this lame cable channel at 3pm on a Thursday. Bill answered with earnest, “Tim, you gotta check this out. This station has some fantastic programming.” Intrigued, I peered over his shoulder as every 10 seconds a new screen would appear announcing local matters of no import. “These guys need to get a life,” I mused. 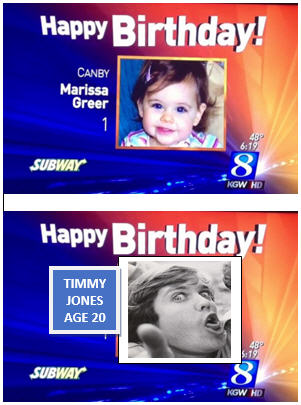 I always wanted to be on television – just not looking like this. Maybe some Hollywood agent would catch this program and offer me a comic gig with Jim Carrey.

Staring back at me was the photo my roomies had taken after my all-nighter. I looked like a crazed serial killer, eyes maniacal, pointing at my next victim. The guys at the station evidently loved the photo because they continued to air my birthday message for three weeks. But I laughed because that’s what good sports do.

College was truly a training ground for me in becoming a really good sport. One morning while heading to classes, I noticed a giant 3’ x 2’ poster plastered to our mailboxes, with another extremely unflattering photo of ME!  Beneath my visage was a disquieting headline:

My roomies were pranking me again – and they were just getting started. At my first class – a 300-seat lecture hall – this same giant poster was plastered on all the walls and even on the professor’s lectern. Same thing for my next class, and  the next… you get the point. Even the hallways were covered with this same mortifying poster. I vividly remember sitting behind two girls who were staring at the poster commenting, “This guy looks like a dork. What a freak show!” Well played, roomies.

In grad school, my girlfriend pulled a most unexpected prank for my birthday. She came to my apartment, handed me a rabbit, shouted “Happy Birthday!” and walked away. I thought, “Somebunny’s pulling my leg,” only it wasn’t a joke. The rabbit really was her birthday gift. (Rabbit cage, food and $600 in subsequent vet’s bills not included.) My relationship with this rabbit would continue three years longer than that with my soon-to-be ex-girlfriend. 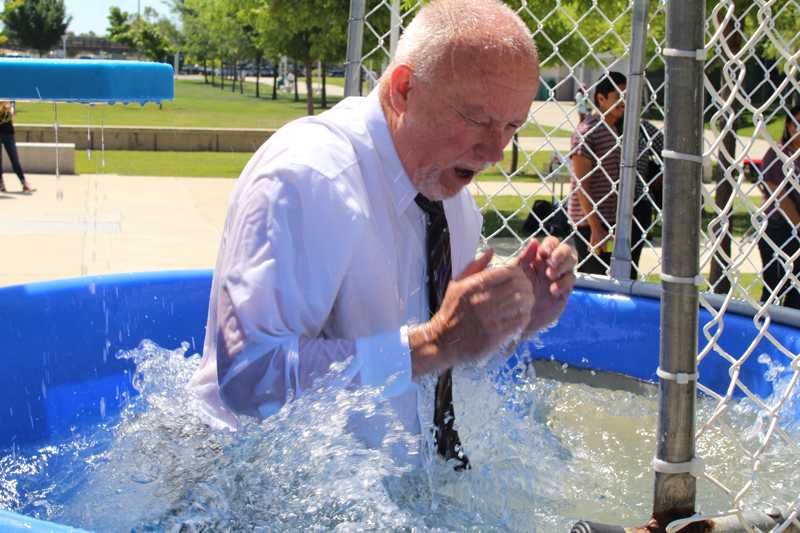 This is exactly how I felt each time I had to dunk myself in the icy cold fountain, for a worthy cause. Great fun. And I found my subsequent pneumonia to be hysterical.

My reputation for being a good sport followed me into the working world. During a United Way fundraising campaign, my boss signed me up for the “Dollars for Dunking” event. Every time someone donated $100, I would take a plunge into an outdoor fountain – in January – in a suit and tie. Let me just say, fundraising records were broken that day.

But nothing will quite match my ultimate indignity – the time my (formerly) dear friend Mark volunteered me to assist a street magician with his act. The fellow needed a sucker for his grand finale, which sadly wasn’t to make me disappear. That would have been a far less humiliating outcome.

As the performer scanned the crowd of 500, Mark thrust my hand high and shouted, “Tim will do it!”. What ensued was nothing short of a stripping of my dignity – and apparel. I was helpless as this street performer coaxed me into removing first my shoes, then socks, shirt, undershirt, pants…until all that remained to cover my nearly naked body were my tighty-whities. The crowd went wild, chanting, “Take it off, Tim.”  To find out whether I ultimately succumbed to their wild pleas, you’ll just have to read the full story here.

Being a good sport has defined my nature throughout life. I really have not minded all the embarrassment – and occasional humiliation – inflicted by supposed friends and obviously jealous co-workers. After all, it just means they like me…. At least that’s what I keep telling myself.