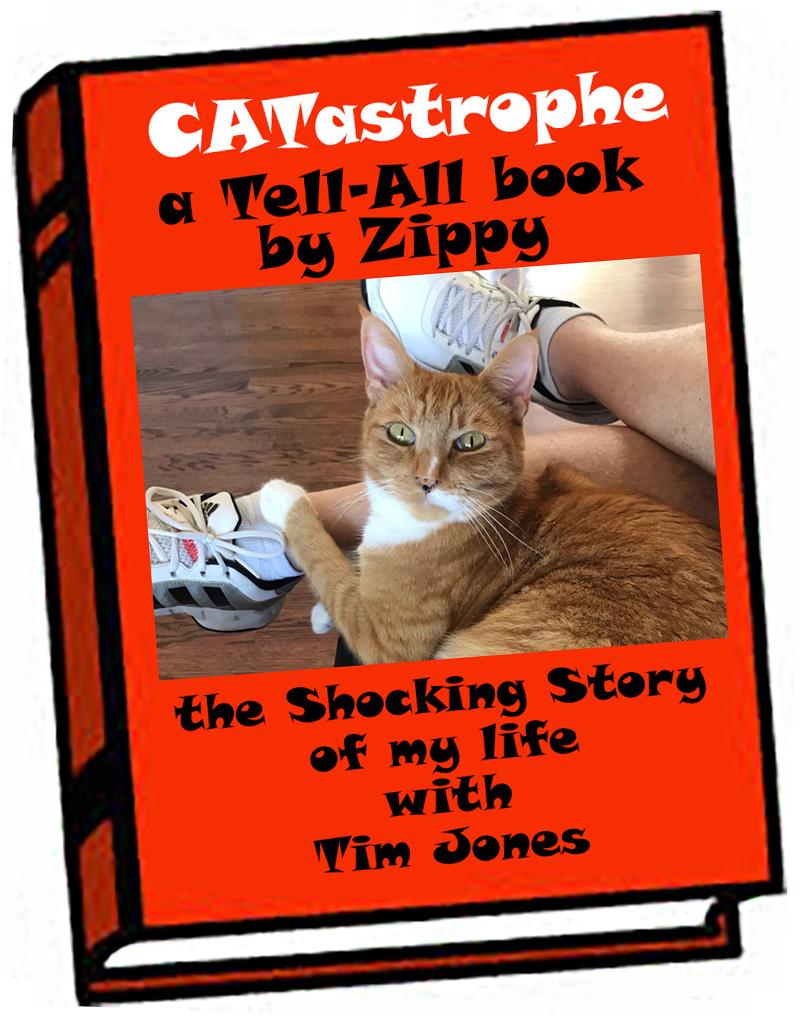 This is my first tell-all book. Spoiler alert: My owner, Tim Jones, is cruel. He never shares his ice cream or caviar with me. And he adopted a mangy cat off the streets without consulting me. He calls him Buddy, yeah, like we’d ever be friends.

In these contentious times, it seems like every week there’s another tell-all book promising to reveal shocking secrets of sordid behavior by a politician or celebrity. Being neither a politician nor celebrity, I was taken aback when my cat Zippy jumped on the bandwagon with his own muckraking treatise – all about me! Out of a warped sense of courtesy, his publisher, Random Mouse, sent me an advance copy. It’s full of lies and half-truths. I doubt Zippy penned it himself, given his lack of opposable thumbs. But then, I have noticed him often lurking by my keyboard.

At the risk of letting the cat out of the bag, here are a few startling passages from this disturbing publication. The full title is CATastrophe – An Unflinching Look at the Horrible Cruelty I’ve Had to Endure for Years at the Merciless Paws of My Evil, Heartless Owner, Tim Jones, Who Lives on Camano Island, WA and Who Could Stand to Lose 25 Pounds. If you ask me, that title is overly lengthy. He should have hired a better editor.

Page 13: “I didn’t choose the name ZIPPY. Like most everything else in my life, it was foisted upon me without consultation or consideration of my feline feelings. Why not a dignified moniker such as Buttons or Tigger? But Zippy? What was he thinking? I asked my owner, Tim Jones (if that’s even his real name) why he chose it. Acting like he doesn’t understand Catspeak, he merely gave me a goofy blank stare and patted my belly. I hate it when he does that. I keep telling him to scratch my ears or chin. But no, he always lunges for my ticklish underside. So insidious…”

Page 88: “Then there’s his annoying laser pointer. He’ll move it left and right, up and down, zig-zagging across the room, until I get nauseous. He thinks it’s hilarious to point the red light at a wall and watch me pounce on it. Splat! I’ve repeatedly asked him to cut it out, but he doesn’t utter a word (apparently the cat’s got his tongue). He just grins, like a Cheshire cat, getting some sadistic pleasure from torturing me…”

Page 147: “Every day, I stare out at the birds hovering around the feeder. There they are, not six feet from me, separated only by a pane of glass. So plump and tasty, especially the chickadees. But Tim refuses me even a feather for a snack. I’ve been drooling for just one tweet – er, treat –  for 35 years (ok, 35 CAT years, but that’s over 1,825 human days!)…” 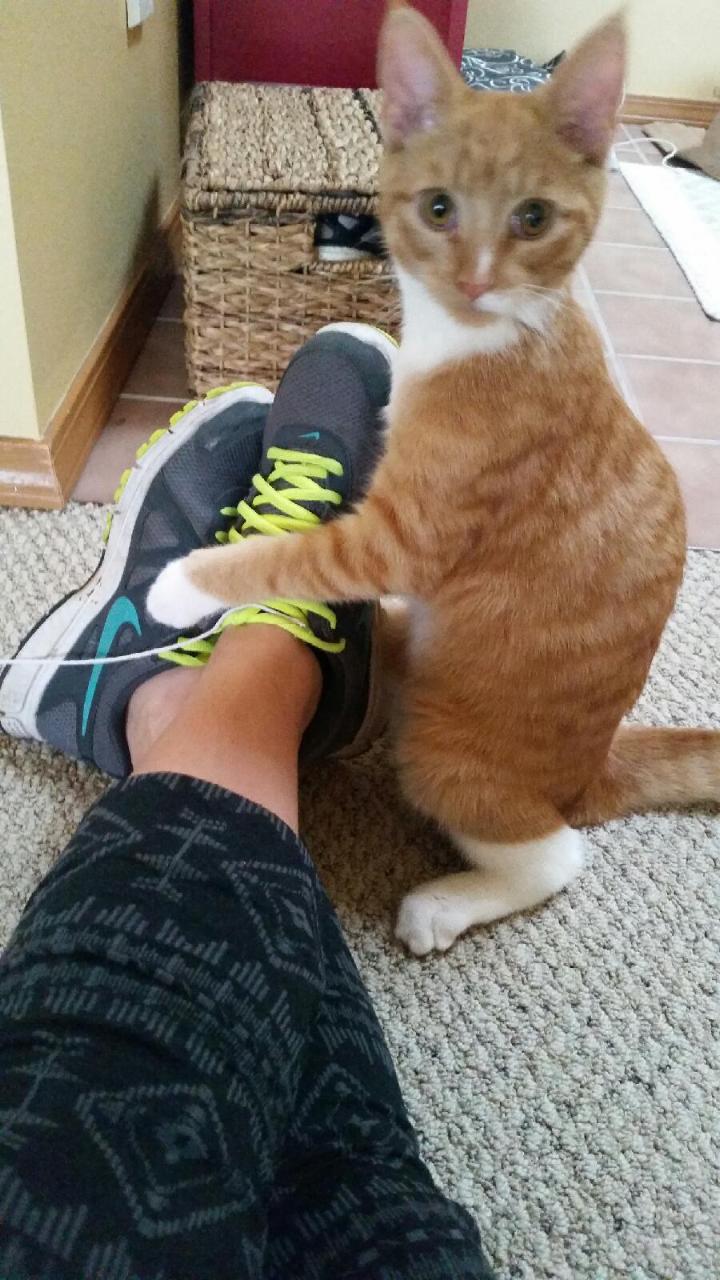 Here I am tying my owner’s shoes, using the standard Cat’s Paw knot. Tim gets all hissy when I bite the laces to pull them tight. He just doesn’t appreciate fine craftsmanship.

Page 260: “One time when my captor opened the front door, I made a bolt for it. Other cats might be afraid they’d get eaten by a coyote, but not me. I’m no scaredy-cat. Oh to explore the amazing outdoors! My escape would have worked, too, except for one thing: He shook a bag of kitty treats. I am powerless to resist that sound. I froze, turned, and zipped back inside. Hey, maybe that’s where he got my name?  I forfeited my momentary chance at independence for two measly morsels of Friskies bits. In my defense, they were catnip-flavored, so I really had no choice…”

Page 355: “I don’t understand why my owner never shares his human food. Several times a day, I watch him stuff his pie hole with English Muffins, burgers, ice cream, Cliff bars, you name it. Whatever he wants. But does he offer any of these goodies to man’s best friend? (Sorry dogs, take a number.) Heck no! It’s always the same entrée: dry cat food pellets. What am I, a rabbit? Oh sure, once in awhile he offers me a can of moist food, something called “chicken” or “mariner’s catch”, but I’m pretty sure they’re not serving any of this crap at Benihana’s. Would it kill him to serve me filet mignon once in a while? (Preferably medium rare – I hate when they over-cook it)…”

Page 499: ”Every few months, Tim does something deeply perverse. He brings home a litter of foster kittens. He claims it’s his mission to socialize them with humans so they will make happier pets for some other family. But I know he has a Machiavellian plan to keep one. Thank God for his wife, who nips that in the derriere. Anyway, while these newborns are nosing in on my turf, guess how much time Tim spends with me. That’s right; Zilch, Nada  – except when, without warning, he hauls me into their room and drops me in the middle of the meowing horde. Next thing you know, five mini furballs are trying to nurse off me. Did I mention I’m a male? But they don’t care. I plan to sue Jones for pain and suffering from all their nasty teeth marks…”

Page 572: “My owner sometimes forgets that, as a cat, I’m supposed to live life on my terms. I’m related to lions and tigers, so it’s stressful living all my days on couches, beds and windowsills when I’m destined to be free. And then there are all the absurd rules he imposes like, “Don’t eat the flowers” and “Stay out of the washing machine“ and “Stop watching On Demand. That costs me money.” He’s crushing my soul…” 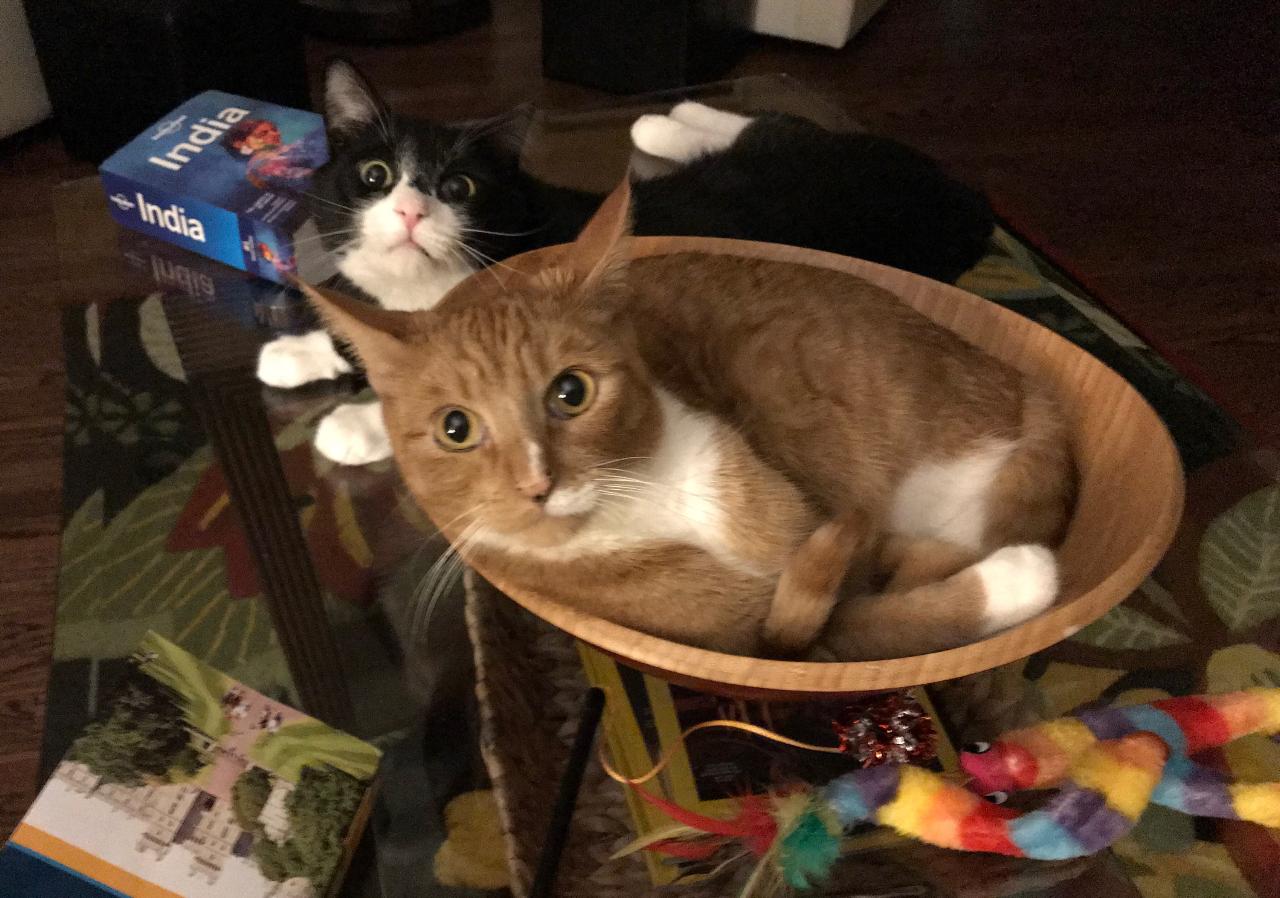 Page 691: “For reasons I can’t fathom, he gets a real bug up his butt whenever I pee on the bed. What’s his problem? It’s so demeaning to squat in a pile of sand in the laundry room. I’m pretty sure the ‘wight to wizz wherever I want’ is one of the freedoms specified in the Constitution. I feel so persecuted…”

I’m only about a third of the way through, and apparently it gets worse. I haven’t gotten to the part where he accuses me of profound emotional cruelty for neutering him – or for the time I dressed him up like a ladybug for Halloween. He’s never forgiven me for that.

Zippy never once interviewed me for my take on his lurid accusations. I considered filing a defamation lawsuit, but my attorney said collecting damages from a house cat could be a long shot. So, I just might keep Zippy out of our bedroom for the next two weeks. That will teach him a lesson.