Never Accept a Ride From a Stranger 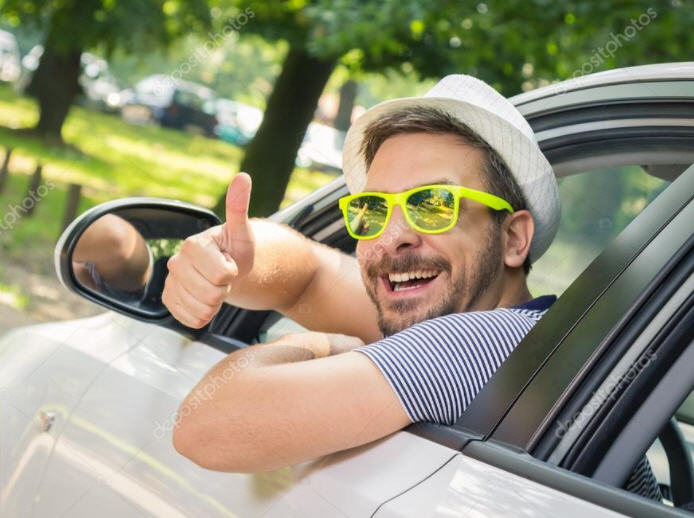 When you were young, remember how your parents told you never to get in a car with a strange man? Well, this is the harrowing true story of the time a young, innocent couple accepted a ride from a strange man. And by strange man, I mean ME. A cautionary tale.

They seemed like such a lovely young couple, deeply in love. They had their whole life ahead of them. They were on their honeymoon, without a care in the world. And then, they made a fateful decision that just might change their destiny forever. They did something incredibly reckless and impulsive, as young people are wont to do. They accepted a ride from a complete stranger. I saw the whole thing unfold because, well, um, that stranger was me.

Austin and Ali from Kansas City, KS, were vacationing in the British Virgin Islands (BVI). I now realize that they probably would not like if it I mentioned them by name, so henceforth, I will refer to Austin and Ali as Jeff and Beth from Lawrence, KS, to protect their anonymity. They were on a day trip to an idyllic tropical island called Jost Van Dyke and had taken a taxi ride to a remote beach, where they were frolicking in the ocean waves.

Unfortunately for this innocent couple, there was someone else lurking nearby: ME – and my wife, Michele. It turned out that we had similar plans for today, as we too were on vacation, and we had recently been on our own honeymoon 34 years prior. Like them, we’d heard that the most incredible beach in the entire BVI was on the opposite side of this extremely rugged, mountainous island. Austin and Ali, I mean Jeff and Beth, had just one small problem. They had no car. They would have to call a taxi driver and wait another 30 to 40 minutes to be picked up.

That’s when they made what could only be described as the worst lapse in judgment of their very young marriage, They accepted my offer to drive them to the other beach, The four of us piled into our cramped Suzuki hatchback rental car, whose main power source, I can only surmise, based on this experience, must have been four AA batteries – either that or a small rodent on a hamster wheel. 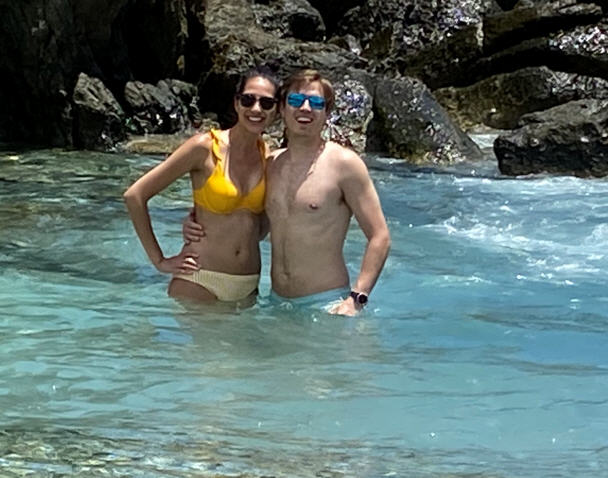 This is Ali and Austin, I mean, Beth and Jeff, a lovely couple on their honeymoon. Don’t they look sweet? Well, within minutes of this photo, they’d be praying to God to let them survive the ordeal I would soon inflict on them.

I was the driver, Michele the navigator. A word about roads in BVI. Even the very best of them are bad, filled with potholes, way too narrow, no lane divider markers, and extremely twisty, with lots of blind hairpin turns. And you have to confront all these obstacles while mastering driving on the wrong side of the street. But today, there wasn’t a “best road” in sight. No, we unwittingly embarked on a fool’s errand to test my driving skills on the most grueling road I would ever attempt in my life.

Michele consulted Google Maps on her phone for the quickest way to get across the island to the other beach. Apparently, the app must have thought we were using a helicopter or a zeppelin because the route it selected took us right over the very top of the island. Or perhaps the BVI version of Google Maps was designed by Satan. Because this journey would take us to Hell and back.

I apparently missed the sign that said, “CAUTION: ONLY IDIOTS ARE PERMITTED TO TAKE THIS ROUTE” because within one minute, we had diverged from a paved surface and found ourselves re-directed onto a dirt and gravel path barely wide enough for one vehicle.

Very quickly, I realized we had made a horrible navigational error in choosing to go this way. If this route qualified to be considered “a road”, then having watched two seasons of Grey’s Anatomy qualified me to be “considered” a brain surgeon. 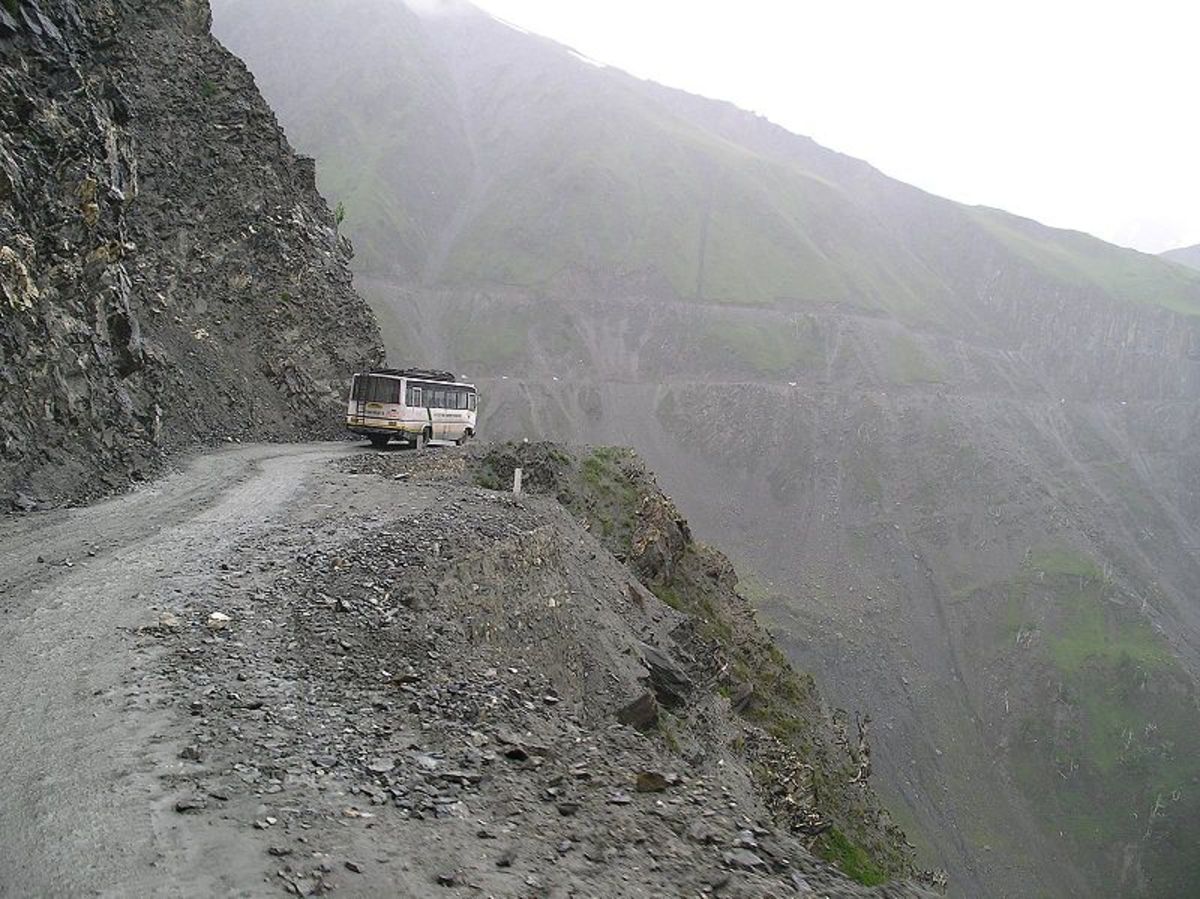 While this is not our vehicle or our road, this is a lot like the road we took, only safer.

The trek became steeper and steeper, and narrower and narrower. The cliffs were easy to see because there were no pesky guard rails to block my view of the 1000-foot sheer drop-off. The further we drove, the rougher the terrain got. The boulders got bigger, the ruts deeper, and in many places we were attempting to scale an incline with a 45 degree angle or higher, sometimes transitioning to a switchback requiring us to make a sharp blind hairpin turn while accelerating up a steep uphill.

If there had been someone driving from the other direction, one of us would have had to make the very difficult choice to drive off the cliff, because there was no way we could pass each other on this narrow obstacle course. But I needn’t have worried about the possibility of someone coming at me from the other direction, because there was no way more than one idiot would try to cross this Highway to Hell.

As all our heads jostled up and down uncontrollably with every bump, like cheaply made bobblehead dolls, I wondered what Jeff and Beth must have been thinking: “Lord, we will go to church every Sunday for the rest of our lives if you’ll just deliver us from this nightmare” or maybe, “Why did you agree to get a ride from a complete stranger? Maybe he’s a serial killer. Or worse – a Suzuki used car salesman!”

The further I drove, the worse conditions became, Then I noticed that the pitch of the thoroughfare sloped noticeably to the right, and I had to fight to keep the car from drifting rightward, towards the cliff. Going downhill wasn’t any easier. I kept pumping the brakes over and over, to keep this freight train from barreling off the cliff as I tried to negotiate one 160 degree hairpin turn after another. But I stoically kept my fears to myself, so as not to alarm our passengers – except for the four or five brief moments when I came upon yet another gut-wrenching hairpin turn and I blurted out, “HOLY SH*T, WE’RE ALL GONNA DIE!!!”

I’ve been to Italy’s ancient star-crossed city of Pompeii. Two thousand years later, their roads still were in better condition than what I had to contend with. During our nerve-racking ordeal, I was increasingly worried that this might end badly. I had visions of the lead story on CNN the next day: “HONEYMOON COUPLE MURDERED BY TERRORIST SUICIDE DRIVER,” followed by a related story on how Suzuki hatchbacks are not recommended for off-road travel. 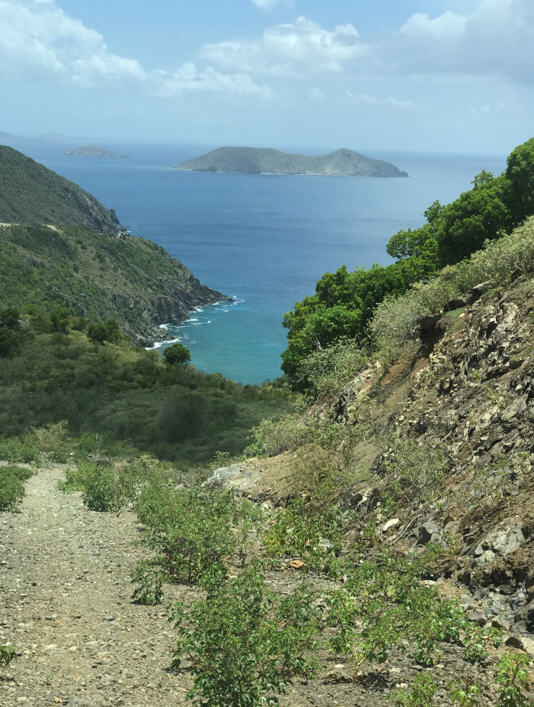 Can you find a road in this picture? Neither could we. But this is a photo of the road we took. In many sections it was almost impossible to tell where the road was. This is a “road” my ass, Google!

This misguided journey took us over the literal peak of the island, through what was inarguably the most treacherous terrain I had ever attempted. If you could ignore the fact that in minutes we were all most likely going to perish in an agonizing 1000-foot crash, I have to say, the panoramic view from up here was rather magical.

After what felt like three days, but was probably closer to 40 minutes, we reached the most beautiful sight I’ve ever seen: a paved street. Somehow I had delivered the newlywed couple to their destination physically in one piece (albeit emotionally in tatters). I thought about asking them for $25 for having provided them with a thrilling memory they would undoubtedly tell their grandkids one day, but Michele thought that would be in poor taste.

Hopefully, someday Jeff and Beth will be able to forgive me for the terrifying experience I put them through. Maybe they’ll even laugh about it. They had to head back home to Kansas the next day. I briefly thought about offering them a lift to the airport. But something told me they’d probably prefer a taxi instead.