[Author’s note:] Since 2015, I have written over 25 articles about Donald Trump alone. Click here, then under Index of Topics, find Trump to peruse these posts. It is my deepest hope to no longer feel compelled to compose about this man. He has taken up far too much real estate in my brain for the past four years. – TEJ] 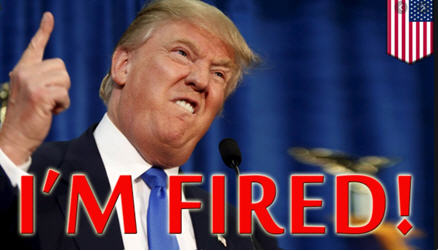 Now that President Trump has lost the election, View from the Bleachers has gained exclusive access to the official transcript of his termination interview with his boss, the American People.

The American People: Good afternoon, Mr. President. Please take a seat. We feel badly about this, but, well, our country has decided to let you go. Your final day of employment will be January 20th.

Donald Trump: Why are we even having this meeting? I clearly won the election. Everybody knows that.

People: We’ve been through this many times. As we have repeatedly told you, you did not win. Mr. Biden did.

Trump: FAKE NEWS! Everybody knows the election was rigged. If you don’t count all the people who illegally voted by mail, I won in a landslide – the biggest in history.

People: Sir, you’re getting worked up again. Would you like a bucket of KFQ to calm your nerves? Maybe a kitten?

Trump: They stole the election from me! It’s so unfair. With help from that thug Hugo Chavez and his Venezuelan voting machines, and Cuba and China and Spain and –

People: Spain? That’s a new one. FYI, Mr. Chavez died in 2013. Besides, all the states have certified that the voting was fair. In fact, even the Department of Homeland Security says it was the most secure election in our nation’s history.

Trump: Well, the folks at Homeland Security were in on it, too. They allowed anybody to vote, even Democrats and blacks. So unfair. It’s all a hoax. Just ask all my Q-Anon followers on Twitter.

People: Donald, you cannot keep cycling through this ad nauseum – and it IS nauseating. We see that you’ve already posted seven rage tweets since this interview began. You really need to find a healthier outlet. Have you considered adult coloring books? They can be very relaxing.

Trump: Adult? Sure, I’ll grab a few. And some of these Sharpies, and my Oval Office stapler, too.

People: Donald, stop stuffing your pockets! Technically, these items belong to us. Put them back.

Trump: All of this belongs to me, including this building. I won it fair and square in 2016 – without any help from Vlad.

People: Still fixated on 2016, are we? Perhaps we were not clear enough at the outset of this meeting. We are letting you go. The sooner you accept this, the sooner you – AND WE – can move on.

Trump: You can’t fire me. I’m the only person who gets to say, “YOU’RE FIRED!”

People: As to that, we have reviewed your job performance extensively. The data doesn’t justify keeping you on any longer. You’re simply not up to the job.  The nation’s unemployment numbers are surging, the deficit is skyrocketing, all our allies are furious with you, and the COVID pandemic is spiraling out of control.

Trump: You mean the China Flu. Blame China. Totally not my fault.

People: Plus, we’ve received numerous anonymous complaints from your employees. They describe you as utterly incompetent. And that’s the most positive comment we’ve read.

Trump: Total radical leftist propaganda. Everybody who works here loves me – even the ugly ones. They all tell me I’m the greatest, handsomest, most stable genius president in history.

People: Well, the feedback from your subordinates says otherwise. They say you’re racist, foul-tempered, misogynist, corrupt, narcissistic, lazy, unwilling to read, and impulsive. They go on to say you’re divisive, mean-spirited, vindictive with  no attention span – Donald, are you even listening? Stop playing with your Trump superhero action figure and focus.

Trump: Those people, they’re are all losers – just like soldiers. I should have fired all of them the moment I hired them.

People: Mr. President, it’s clear you simply haven’t taken this job seriously. Most days you simply stay in your bedroom watching TV until well past noon. Our records indicate you have averaged over 30 lies per day. No other president has ever lied as incessantly as you. Furthermore, you spent over 300 days just golfing. Far over par. No other modern president comes close.

Trump: So, you’re saying I’m a high achiever. Finally, we agree on something. Most of those golf outings were charity tournaments.

People: We fact-checked that. Those “charity tournaments” you played in were to raise money for Trump University.

Trump: A great institution. Way better than Harvard. The Ivy League schools are all overrated.

People: Donald, we’re getting off track. Are there any Presidential decisions you made for which you wish you could have, to use a golf metaphor, a Mulligan? A do-over?

Trump: Like you said – my decisions were all presidential. A perfect presidency. Oh, wait. Picking Pence for my VEEP was ill-advised. Stupid advisors. I should’ve gone with Kristi.

People: Kristi Noem, the Governor of South Dakota? Why?

Trump: First, she adores me. Second, have you seen her? She’s a 10. Smokin’ hot bod. I bet I could have gotten her into the sack.

People: Eew. Any other regrets? How about how you separated Mexican children from their parents and put them in cages? Don’t you have even the slightest pang of guilt around that debacle?

Trump: Not my fault. If Nancy Pelosi and her gang of Congressional Communists had just let me build my wall in the first place, none of this would have happened. So, it’s totally Nancy’s fault – and Hillary’s. They are two NASTY women.

People: How about your handling of the Coronavirus pandemic? Over a quarter million people have died, even though you kept saying it would magically go away and that we were always turning the corner.

Trump: Hey – I got through it fine. It was no biggie. If a quarter million morons can’t handle the common flu, that’s on them.  But Sleepy Joe totally dropped the ball. He did nothing these past 11 months to stop the spread.

People: He wasn’t the president, Donald.  You were! This is one of the many reasons why we decided to let you go.

Trump: Says who? I’ll decide when I go. Besides, I packed the Supreme Court with my justices. They owe me. So, I’m pretty sure I’m here to stay. “12 MORE YEARS. 12 MORE YEARS!”

People:  No. Like we said, your termination is effective January 20, 2021. On that date, you must evacuate the premises. President-Elect Joe Biden will be sworn in as the 46th president. This is not up to you. 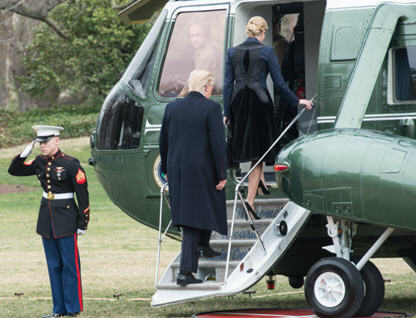 Trump preparing to board Marine One for the final time, after getting fired by the American People. The reasons given for his abrupt termination were many, but boiled down to this: “We (the American people) think you’d be happier selling condos, Donald.”

Trump: Fine. I’ll go. I’ll just put Jared and Ivanka in charge. They’ll do whatever I tell them to.

People: Donald, we don’t think you understand. We are evicting you – and your entire team, including Jared and Ivanka. You can move back to Mar-a-Lago. But you can’t stay here.

Trump: Well, in that case, I’m taking a few things with me. Because I was told that I get to keep them.

People: Uh, no, you cannot take that bust of Lincoln. Or the Resolute Desk. They belong to the people of the United States.

Trump: I carved my initials in the desk, so legally it’s mine now. And that lamp. And this toaster… and this set of steak knives…. and…

People: Oh, dear….. Security? Send a Secret Service detail to the Oval Office stat. We appear to have a bit of a problem.