My 15 Minutes of Infamy 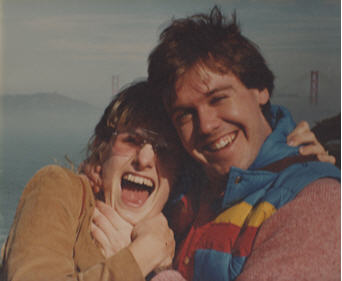 My sister Betsy and I have always been close. I always have her back and sometimes I have her throat too. Like I said, we’re very close.

[The following is true.] This story is not really about me. But as is usually the case when I tell stories, I’m going to make it about me anyway. My sister Betsy and I have always been extremely close – unless you count that one time when I’m fairly certain she tried to kill me. But I digress.

Way back in 1999, Betsy was interviewed by Katie Couric on NBC’s Today Show with her twin boys. To understand how they ended up on national TV, we have to go back several years before her national television debut, to September 8th, 1990.

At that time, Betsy was massively pregnant with twins and due to deliver in six weeks. Doctor’s orders restricted her to no travel outside Albany, where she lived, in case the babies got pushy and tried to arrive early – which if you ask me, is highly inconsiderate of any prenatal youngsters. I therefore persuaded Betsy to go on a drive with me 60 miles north to the idyllic Lake George. I was particularly looking forward to a boat ride. In my defense, I was not yet a parent myself – and I’m a guy – you really can’t expect me to have a clue about obstetrical matters.

Betsy said okay – except for the boat ride – something about not wanting to rock the pregnancy boat. And she rudely insisted on driving. I gently pointed out that she was too huge to fit behind the wheel. She slugged me. Then she maliciously accused me of being a poor driver who hit every pothole and bump in the road.

Long story short, we had a lovely day up north. Betsy began the drive home, but soon got too exhausted to drive. Wimp. Reluctantly, she let me take the wheel. As Betsy had predicted, I hit every pothole and speed bump, enduring Betsy’s repeated rants of: “If the babies are born tonight, it’s your fault!” Personally, if you ask me, I think New York State needs to improve its highways.

Spoiler alert. Betsy’s babies didn’t arrive that night. In an unrelated story, at 5:00 the next morning, Betsy went into full labor. Her first words caught me by surprise: “Tim, this is your fault for hitting every bump in the GD road!” At 9 am the boys came down the chute. (Is that okay to say in a story about your sister? ) They weighed in at a scant 3 lbs. 14 oz and 4 lbs. 8oz, respectively. Though tiny, Betsy’s identical twin boys were just fine.

The same could not quite be said about Betsy. Apparently worn out from a challenging birth – or perhaps just from visiting too many tourist shops at Lake George the day before – she was utterly exhausted and became incoherent. She actually started speaking exclusively in French (she had lived several years in France). On the negative side, doctors were worried that she might have suffered some mysterious medical complication. (She hadn’t). On the positive side, her French was flawless.

The twins were born on September 9th, 1990. Most normal people would not think anything special about that date and would just be glad their newborns had approximately the right number of fingers, ears and noses. But my sister somehow figured out minutes after she regained the ability to speak English that one day her boys would celebrate a uniquely memorable birthday. 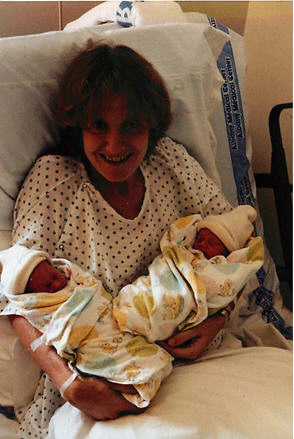 This is my sister Betsy, cradling her newborn identical twin boys. I know, it’s hard to tell them apart. So, in case you’re not sure who is who, Betsy is the one in the middle.

Fast forward to summer 1999. Betsy had a brainstorm – inspired by an innocent query of her twins as to what they wanted for their birthday: “We want to be on TV”. So, she called a local news station and told them how her identical twins would be turning 9 years old at precisely 9a.m. on 9-9-99. They referred her to NBC, who referred her to Willard Scott (remember him?) Apparently, it was a slow news week because The Today Show said YES! They wanted to interview Betsy and her twins on LIVE TV. Oddly, the network neglected to interview me. I’m not going to lie. That slight really stung.

NBC flew Betsy and her twins, named Tyler and Kevin (not their real names), from Albany, NY to New York City, met them with a limousine, and put them up at the luxurious Essex House Hotel on Central Park. (Okay, I lied. Kevin and Tyler ARE their real names. I just wanted to protect their privacy. I appear to have failed miserably.)

Finally, Betsy’s big moment of national stardom was here. While she was on the set of The Today Show, chatting with Al Roker, I was in my living room, wearing a nice beige pull-over cotton shirt and blue jeans, having just finished cleaning up the dishes and taking out the trash. Now that I re-read the previous sentence, I see that it really added nothing to the storyline. Please accept my humble apology.

Anyway, right after the commercial for Bounty Towels, the show was back on. Katie Couric introduced my sister and the soon-to-be-famous twins to a national television audience. She began with a warm hello to the boys. And was met with … dead silence. You could hear a pin drop. Katie prompted them with an innocent question about their favorite birthday present. She was met with a torrent of rambling twin-speak, as Barry and Larry (not their real names) answered together, babbling in harmony about some colorful thingamajig that sparkled and twirled. The ever-poised Ms. Couric, who had interviewed movie stars and world leaders with aplomb, was speechless.

She recovered, however, and steered the interview in another direction, asking Betsy, “Is it true that their uncle played a significant part in their birth story?” 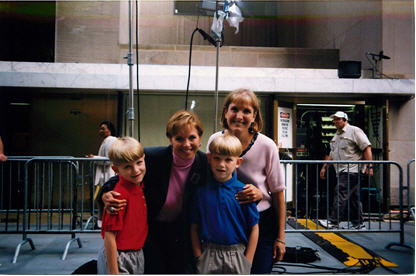 And you thought I was making this up. Here’s Katie Couric of NBC’s Today Show on 9-9-99, after Betsy’s appearance with her twins. Apparently there was a scheduling mix-up, as I was accidentally left off the show.

Then Betsy began to destroy my reputation: “My brother Tim is a terrible driver.” She proceeded to retell the events of our driving adventure on September 8th, 1990, and how I hit every bump on the road. “I told Tim to drive more carefully because he had a pregnant woman in the car. I even said, ‘If I give birth tonight, it’s ALL YOUR FAULT!’ Sure enough, the twins were born the following morning. They have called my brother ‘Uncle Bump’ ever since, because of his driving. I need to reiterate this. Tim is a really bad driver.”

Thanks for throwing me under the bus, sis. I may be a terrible driver, but if it weren’t for Ole’ Uncle Bump, your kids would’ve been born on some forgettable date at a healthy weight and lived lives of obscurity. And you never would have been on national TV, chatting with America’s Sweetheart, Katie Couric.

So, if you ask me, this story is really about how great a big brother I was by selflessly helping my little sister achieve her 15 minutes of fame. She returned the favor by turning the spotlight on me for my 15 seconds of infamy.