Announcing a New, Politically Correct Name for the Washington Redskins 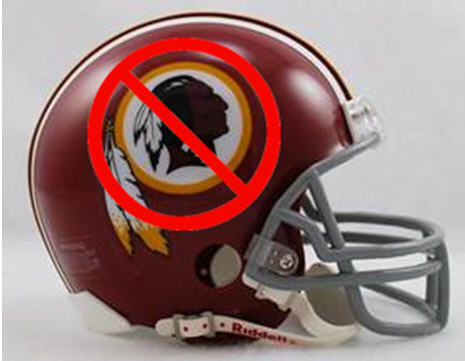 This helmet has been at the center of a heated controversy for years. Many people feel the name “Redskins” is an offensive stereotype for millions of Native Americans. There have been many calls for a less offensive team name. One suggestion which I suspect might not get the nod: The “Washington Negroes.”

Thanks in part to the Black Lives Matter protests, media attention has recently turned to the controversial name of the NFL football franchise in our nation’s capital: The Washington Redskins.

A tiny fringe group of a few million annoyingly sensitive Americans, including 35 Native American tribes and more than 50 organizations that represent various groups of Native Americans, seem to think the term “redskin” is an offensive stereotype that stirs images of primitive, angry, bloodthirsty savages screaming menacingly and wishing to annihilate their enemy – in other words, acting like typical Washington Redskins fans. And they are demanding that billionaire team owner Daniel Snyder change the team name to something less offensive – say, the Washington Camel Jockeys.

Or how about simply going 180 degrees in the opposite direction of the offensive Redskinned image and calling the team the Washington Palefaces, in honor of our nation’s 234 million proud Caucasian Americans? Still not working for you? Okay, I was saving my best name for last. It’s brilliant, if I do say so myself. Are you ready? Here goes: The Washington Redskins! 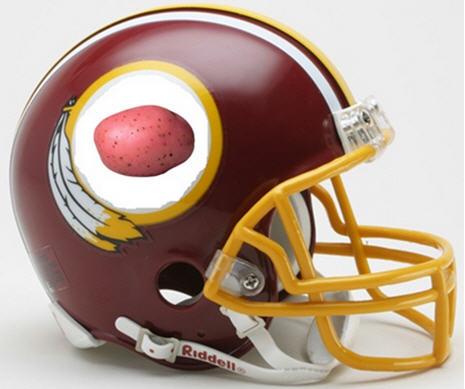 My solution to the problem: Don’t change the name. Change the graphic. How could anybody possibly take offense at an image of one of our nation’s most popular agricultural staples, the noble REDSKIN potato! Brilliant, eh? Problem solved.

Okay, I know what you’re thinking – doesn’t that sound vaguely close to the name the team currently goes by? But I’m not talking about some emotionally charged racial profiling of our nation’s oppressed Native American population. Not in the least! No, I’m talking about proudly honoring one of our nation’s great agricultural staples from America’s patriotic heartland: The Redskin Potato. Think about it. The team won’t have to invest millions of dollars researching a name change. All they have to do is slap a new logo on the team helmet. See my proposed new logo at right.

Admit it. Who doesn’t love a redskin potato? They go fantastic with roast beef and perhaps just a light sprinkling of cheddar cheese to bring out the flavor. This could totally bring our divided nation back together. After all, I’m fairly sure the Native Americans served redskin potatoes to the Pilgrims back at the very first Thanksgiving. Or was it maize? Doesn’t matter. My point is, this will finally solve all the long-festering problems of race relations between whites and Native Americans over the past 400 years, and all of our Native Americans’ difficulties will magically disappear. No need to thank me, my fellow Native Americans.

And just think of all the fun sports announcers will have with the new brand:

“The Redskins’ offense has stalled. With fourth and long, they’ll have to punt again. Looks like their game plan for today’s contest against the Colts was half-baked.”

“Ooh, that hit by the Chargers’ safety flattened the Redskins quarterback. Talk about one mashed potato, eh, Brad?”

“In the second half tonight the Redskins have SPUDDERED. By the fourth quarter, it appeared most of their players were totally fried, wouldn’t you agree, Brad?”

“Looks like the Redskins nose tackle may have been hurt on the play. I guess that would make him a potato chip, eh, Brad?”

“What in the hell are you talking about, Fred?”

“I mean he’s injured – you might say, chipped. Get it? Potato chip?”

The young rookie players could be called tater tots. If a player has a great game, I could see the newspaper headline the next day: “Redskin Quarterback is Hot Potato in Come-From-Behind Victory.”  See what I mean? The sound bite possibilities are endless. 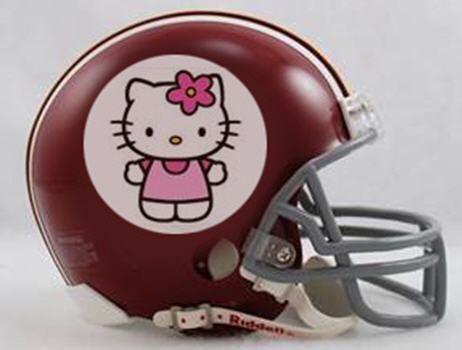 If my redskin potato graphic doesn’t fly, here is my backup proposal. Who doesn’t love Hello Kitty? I know my girls sure did – back when they were five. Go, Kitties! MEOW!! What a purrfect new logo, am I right?

I came up with a great new tag line to boost fan support for the team: “Support your NEW Washington Redskins. This Spud’s for You.”  I can’t imagine any Fortune 500 company possibly being upset over such a fun tag line, can you?

I’m confident that if the Redskins team owner thinks about my idea, he will quickly adopt it – and hopefully give me a modest 5% of all future ticket sales. And once and for all, this sordid Redskin naming controversy will vanish quicker than the Redskins’ chances of making the playoffs.

In the unlikely event Mr. Snyder stuns the world and refuses to adopt my solution, I even came up with a backup plan: The Washington Kittens. Check out the new helmet logo at right. I’m confident this move would bring young girls out to the stadium in droves, especially on Stuffed Animal Day. What can I say? I’m an idea machine.