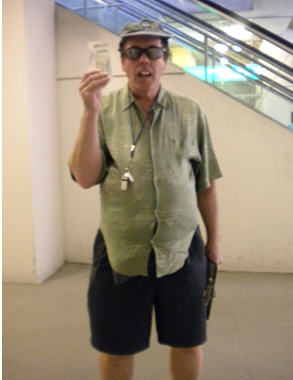 Sometimes people worry that there are no depths to which I will not sink to pull off a practical joke. They’re probably right to be concerned. This is the true story of the best practical joke I ever pulled – which almost got me arrested.

I love to play practical jokes. Hard to believe, I know, being as shy as I am. Sometimes I pull off an Oscar-deserving gag – like the time I ambushed my oldest friend at the Columbus airport in disguise (see photo at right). Due to the resulting lawsuit for mental anguish, I cannot use my friend, Bill Anderson’s, real name here.

Though we both grew up in Albany, NY, I had migrated to Seattle and Bill to Baltimore. One day, Bill’s wife Johanna phoned to invite me to visit. “I know Bill would love to see you.” I replied, “I wish I could, but I used all my frequent-flyer miles for an upcoming family reunion in Columbus.” Johanna became really excited and asked, “Columbus, OHIO? Really? When are you going?”

It turned out that Johanna and Bill were going to be in Columbus the exact same weekend as my daughter and I (to attend a wedding). They were arriving one day after us, which got me thinking… and plotting….

Bill and I are life members of Pranksters Anonymous, always one-upping each other. This was a golden opportunity to pull a huge one over on my old buddy.

The stage for my plot was set: the Columbus Airport’s baggage claim area. I scrounged up some fake rotted out teeth (think Deliverance), donned dark sunglasses, a baseball cap, and a whistle. For extra measure, I stuffed a pillow under my shirt, making me appear 60 pounds heavier. Even to my daughter, I was unrecognizable.

As Bill, Johanna and their kids descended the escalator, I launched my sneak attack. Waving a pair of tickets, I started shouting, “Get y’ar tickets hee-are fer duh Columbus Crew sockuh game.”  Imagine a melding of hillbilly drawl and chain-smoker’s growl.

Cornering an unsuspecting traveler, I bellowed, “Howdy, mistuh. Y’awll look lahk a good sport. I got deez two tickets faw tanight’s soccuh game. Wanna buy ‘em? – half price. I need thuh money for alimony. Mah Ex is bleedin’ me dry. Help me, please.” I made sure I was loud enough for Bill to hear the entire play-by-play. The poor chap bolted into the crowd.

My next mark was within three feet of Bill. I hit my stride with an even trashier story:

I was confident my ultimate target had heard both pestering conversations. Time to go in for the kill.

I invaded Bill’s personal space with the same sandpapery, hillbilly, slow-talkin’ sales pitch: “Whutta purty family you got der sir. I bet duh kiddies would love to see a perfessional soccuh game. An’ I just happen to have some tickets. Best price in town.”  Bill was surprisingly gracious, replying, “Thank you for the offer, but we have other plans.” He hustled his family away like a papa bear protecting his cubs from some predator.

I surreptitiously followed them to the luggage carousel, It was clear Bill had no idea who I was. As  he reached for his bag, I came out of nowhere and grabbed it. “I got it, sir. Hey there! Fancy bumpin’ into you again! This sure is yer lucky day!” Bill was taken aback and momentarily flustered. My chance to close this deal.“Now, ya’ seem lahk a man who knows a good investment when it’s staring him in the eyes,” I proclaimed, as I shoved the tickets in his face. “Chance of a lifetime.”

“Um, no thank you,” Bill  anxiously muttered, as he futilely tried to wriggle out of this awkward situation without it turning ugly.

I looked to Johanna and remarked, “Wooo-eee! Is this lovely lady your wahfe?” 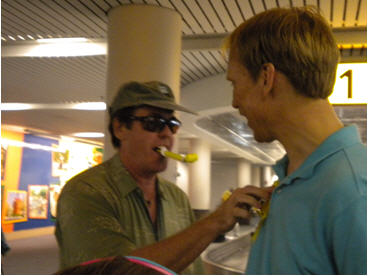 Full frontal attack with a party horn, soccer tickets and a little too much personal touching by an absolute stranger.

“Um, uh, yes,” Bill stuttered, inching in front of Johanna as if to shield her from an encroaching snake.

I was a dog on a bone. “Heck, mister. I can tell yer a upstandin’ Christian, and duh Good Book says to help out dose dat’r down on their luck…Please. Jus’ $50 – a steal.”

Now, the art of practical jokes is to push the target almost to the brink of losing it, and then make the big reveal. We were almost there.

I cajoled, “You look lahk awfully nice people. I’m willin’ to just give ya’ duh dang tickets – No charge. Deal?”

Bill sheepishly caved, no doubt just to get rid of me. To his horror, I started cheering, “Yeehaw! You are one lucky man!” I pulled out a party horn and blew loudly, announcing to the gathering onlookers, “Folks! This here gentleman is going to the Co-lum-buss Crew soccuh game! Woo-hoo!”  I presented Bill with the prize tickets like he had won the lottery, patting him on the back and making a raucous scene.

Bill desperately wanted to escape this close encounter of the uncomfortable kind, so I decided it was time for the Final Act.

I started to turn away, paused, looked back, and asked, “Hey buddy, don’t I know you from somewhere?”

“I’m quite certain you do not,” Bill rebuffed, suddenly becoming assertive.

“Are you absolutely certain?” 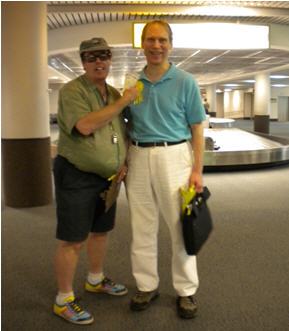 Here I am with Bill after my big reveal. If I tried this stunt nowadays, sadly, I might not need the “fat” pillow. Sigh.

“Cuz you sure look an awful lot like this fellow I once knew named … [long dramatic pause]… BILL ANDERSON.”

“How do you know my name?” Bill was completely flummoxed – how could this annoying vagrant ever have been an acquaintance?

“Well, I gotta say, it’s kinda disappointin’, Bill. To think you don’t recognize me,” I continued with my thick-as-molasses gravelly drawl. “Cuz I sure as shootin’ remember you. You really don’t remember…. (slowly removing my teeth, sunglasses, and pillow, and then in my normal voice) … “your oldest buddy in the world, Tim Jones?”

Bill’s jaw hit the floor two levels below. Speechless, he stood there in shock and disbelief for almost a minute. Then he burst out laughing. “That was awesome!!” he exclaimed with a glint in his eyes – a rather mischievous glint. And I knew right then there will come a day – I don’t know when and I don’t know where – when Bill will undoubtedly even the score. I can’t wait. Your turn, Bill.

[Postscript: As I was writing this column, my daughter Rachel informed me that as I was playing my little charade, unbeknownst to me, airport security personnel were watching and moving to intervene. Rachel was able, somehow, to keep them at bay by explaining that I was harmless, I was her dad and that it was just a lighthearted practical joke I was playing on an old friend. So they backed off. I had never known this part of the story until just now.]