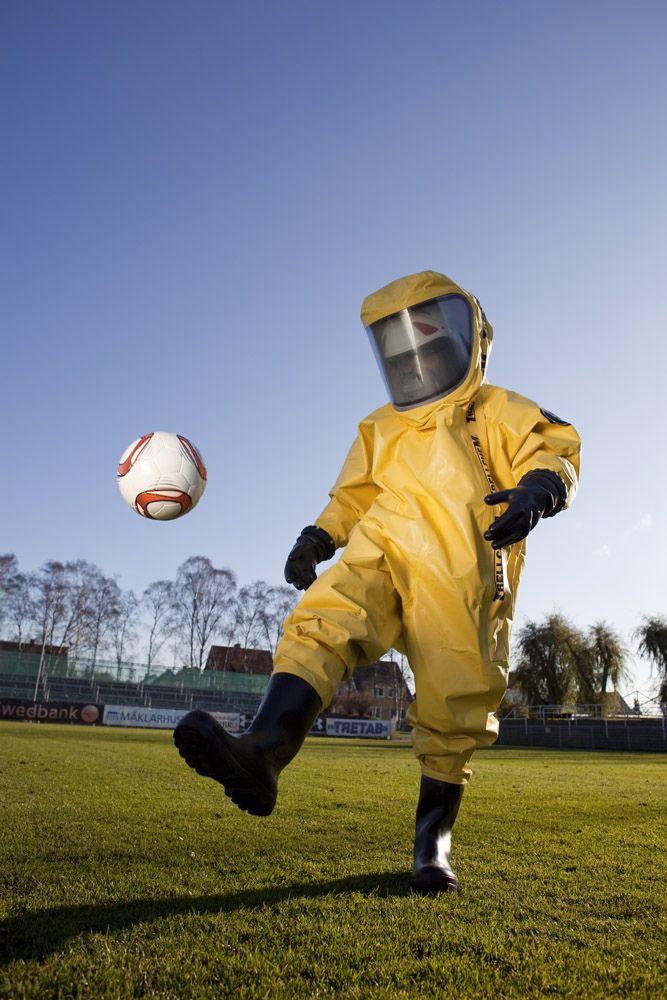 The Coronavirus doesn’t mean an end to sports. It just means taking a few common-sense precautions for your safety. Take this striker for Arsenal Soccer. He can continue to play with no worries – just so long as his helmet doesn’t fog up.

Welcome back to Eyewitness News. It’s time for a check on sports with our sports anchor, Tim Jones. Tim, what’s happening in your world?

Thanks, Tina. Love your purple medical mask, by the way. Matches your shoes.

Howdy, everybody. A lot to get to in today’s jam-packed look at sports. Just because, thanks to the Coronavirus, there’s no baseball, basketball, hockey, football, NASCAR, Olympics, soccer, golf, horse racing, track & field, boxing, volleyball, rugby, cycling, bowling, gymnastics, figure skating, badminton, or Australian Rules shuffleboard happening – which have all been cancelled through August 2023 – that doesn’t mean there’s no sports to report. So, let’s get started!

In tennis, 47-year-old Arnold Schwimmer defeated 53-year-old Ben Dankleworth of Westerville, OH, 6-3, 6-2, in their weekly tennis outing. Ben attributed his disappointing performance to a whopping hangover. “Being trapped at home for 24 hours at a time, I have only two choices: talk with my wife or drink. Guess what one I picked?”

I want to wish Ben the best of luck in his rematch next week – unless his wife confines him to quarters,  in which case, I might suggest Ben test his skills in his second favorite sport, beer pong.

Speaking of pong, 52-year-old Bart Mathers lost to his 25-year-old son Nathan in ping pong, 21-4, 21-3. After the match, the elder Mathers complained that his opponent displayed extremely poor sportsmanship by “never easing up on his old man.” The champ snapped back, “I could have beaten that boomer blindfolded.” In the subsequent rematch, Nathan did just that.

In an open grassy field in Bulls Gap, Tennessee, the finals of the Frisbee Toss Invitational pitted newcomer Joshua Klein against college roommate Micky Sullivan, the heavily favored reigning champion. Though held before a disappointing crowd of one – Josh’s dog Archie – it was an exhilarating dog-eat-dog clash. In a shocking upset, Josh claimed the win. However, his victory was not without controversy. In the final minute, just as Micky dove to make an incredible game-winning catch, Archie leapt from the sidelines, snagged the frisbee, and ran off with it. A formal protest has been filed. When interviewed, Joshua refused to comment, as did Archie.

Due to the Covid-19 pandemic, several sporting events were moved indoors to home venues. In Parkersburg, WV, Ralph Romano squared off against his 7-year-old daughter Lily, for the Romano Family World Championship of Jump Roping. Lily completed an impressive personal best of 32 jumps without a misstep. Her dad, on the other hand, fell way short of her mark, succumbing after only 5 rope revolutions.  Somehow, he got tangled in the rope and did a face plant into the family room coffee table. I regret to report that the lava lamp suffered a direct hit and could not be salvaged. 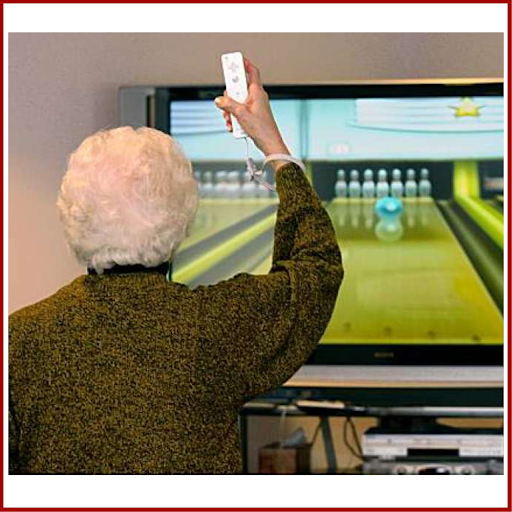 This elderly woman is staying indoors and enjoying her sports safely. See how she’s holding a Nintendo Wii game controller. Unfortunately she thinks it’s a TV remote, and she can’t figure out how to change from bowling to her favorite quilting show.

In fishing news, longtime angler Harley Dickinson from Moose Lake, MN went trawling with his buddy Herb. His wife Agnes cautioned them to practice safe social distancing in light of the pandemic. “We’ll be fine,” Harley insisted. “We’ll sit back-to-back in the boat.” It appeared that Harley might break the record for the largest fish ever caught on Moose Lake Lake, as he prepared to reel in a 6-foot, 200-pound sturgeon. That is, until the sturgeon tugged back and hauled Harley overboard.

Harley is recovering quietly on a cot in the garage (the sturgeon bit his leg). Agnes is not speaking to him. When asked for her thoughts about the near-tragic incident, Agnes merely muttered, “Idiot.”

Checking out hoops news, 13-year-old Wilbur Douglas, playing for Duke, beat his twin brother Orville, representing Kentucky, in the living room finals of the National Nerf Basketball Tournament. Duke had a comfortable lead of 37-21 at halftime but threw it away as Kentucky blazed ahead in the second half to triumph 59-57, thanks to a last second buzzer beater by the Wildcat’s star player, Orville.

Duke then challenged Kentucky to a slam dunk contest, which was promptly terminated by an official (dad) after Wilbur, attempting a difficult skyhook shot, swung from the chandelier and brought it crashing to the floor. In a first for a major collegiate basketball program, Duke was grounded for a week.

In Day One, Eamon was slightly in the lead in the medal count with 4 golds, 2 silvers and a bronze until his mother told him he had to, and I quote, “turn off the damn computer and come to dinner this instant or you’ll be doing dishes for a month.” He tried to go for another gold under the table using his iPhone, but was busted when he leaped up shouting, GOOOOOOOLD! The IOC president (Eamon’s mom) has banned him for future competition for testing positive for stupid. 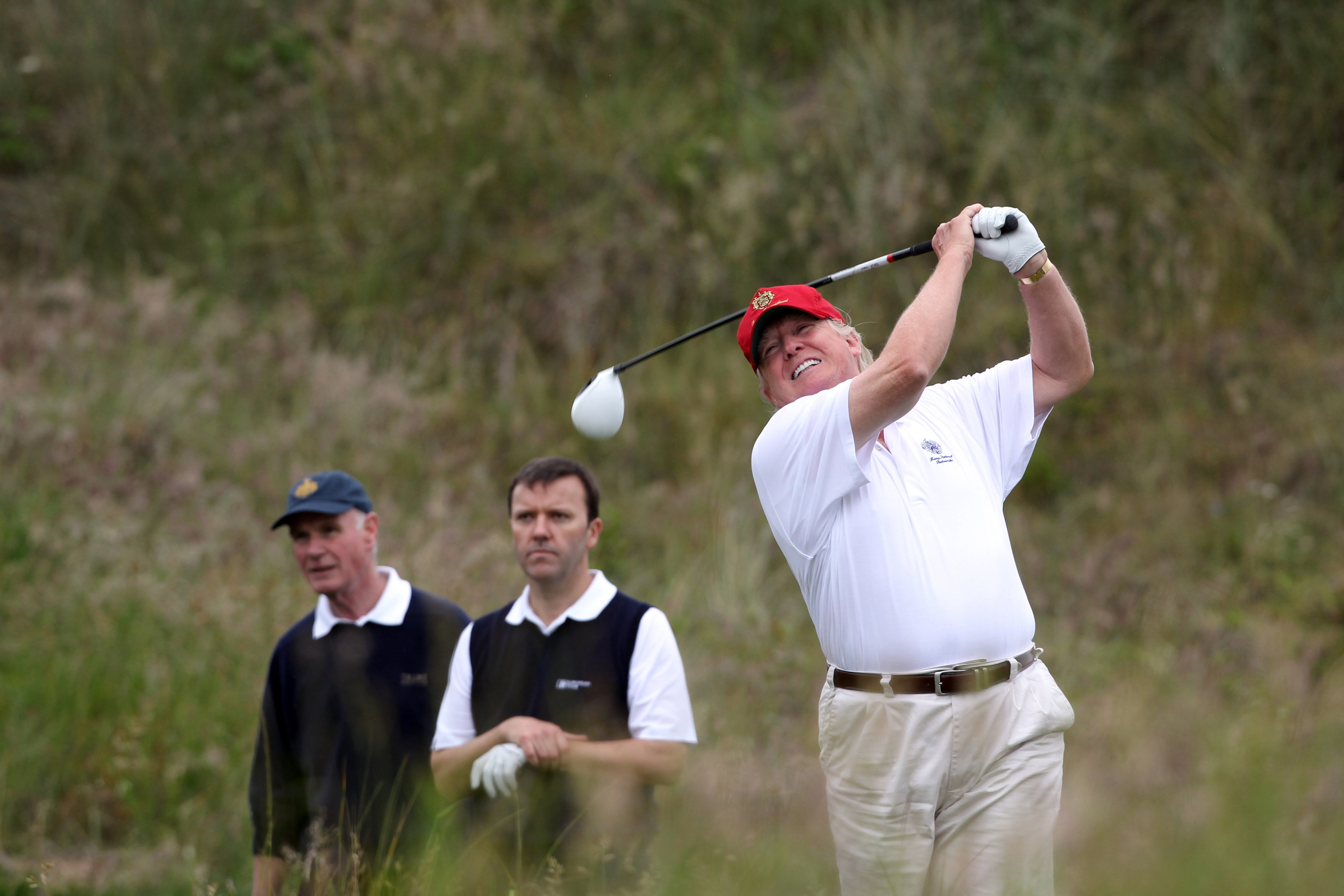 Despite the ban on most non-essential outdoor activities, President Trump continues to ignore safety guidelines. Experts all agree, what he’s doing is dangerous. Oh, and he should probably stop golfing, too.

Martha Gladstone of Bozeman, MT, competing in a sport that has skyrocketed in popularity lately, defeated 17 other challengers in the Kroger Inaugural Toilet Paper Aisle Sprint. Martha reached the register tape with six bags of two-ply tissues just 1.7 seconds before her nearest rival, Thelma Vandenburg. Martha’s victory was marred slightly when she realized she’d raced right past the Purell and disinfecting wipes without thinking to grab any – a costly error. She was later disqualified for exceeding the limit of 3 bags per customer. On hearing the news, Thelma took a victory lap down the frozen foods aisle.

That’s it for sports. Join me again at 11:00 for highlights of the Miller family’s backyard horseshoe toss competition, along with an update on Lenny Davidson’s courageous quest for a personal best at the NordicTrack recumbent stationary bike challenge. You won’t want to miss it. Back to you, Tina.

Thanks, Tim. We’ll return with more news, including, When will it be safe to drink Corona beer? And more on the Governor’s new Coronavirus policy on social distancing, making it a crime to commit eye contact.

But first, this commercial message from the makers of Purell.