Things I hope people won’t mention at my funeral 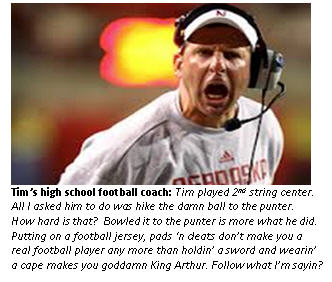 Recently I turned 35 years old, and by recently, I mean 30 years ago. But more recently, I turned 65 – this past January. When you turn 65, you start asking yourself uncomfortable questions like, “How long has that mole been there?” You ponder your own mortality and your legacy and how is it that AARP got your mailing address so quickly.

Lately I’ve begun asking myself challenging questions: What have I done with my life? What do I want to do with the limited time I have left on this planet? Did I have breakfast yet? Where did I leave my car keys?

I wonder about the impact I’ve had on the people in my life. What might these people say about me if they spoke at my funeral? It got me to imagining, which got me to worrying…. a lot…. about what they might have to say:

My earliest childhood friend, Danny: Yeah, Timmy and I were tight – until he destroyed my purple bicycle. I loved that bike. You son of a bitch. When you rode it into that pond and wrecked the frame beyond repair, from that moment on, you were dead to me. You hear that, Timmy? You’re DEAD TO ME!

My first grade teacher, Miss Kelly: I remember Timothy, yes I do. He was a rather chatty young lad. An unhealthy need for approval, if you ask me. As I recall, he had the worst penmanship and he was a very slow reader. Took him forever to get through the book Fun with Dick and Jane. And every crayon drawing he ever did always included a rainbow. I privately wondered whether he might be gay.

Leslie, the religious girl from my church, on whom I had my very first crush: Tim Jones? Was he that dorky, shy kid with the bad acne and braces? Yeah, I kinda remember him.  We went out on one date. As I recall, he actually tried to slow dance way too close. I was mortified. Not something a good Christian boy would do. I hope you don’t rot in Hell for your sin, Tim.

The minister at my church growing up, Reverend Van Heest: Tim was in our church choir for two years. I’m not really sure why the choir director let him stay that long. The poor boy could not carry a tune to save his soul. I guess he’s in Hell now, still trying to sing.

My high school swimming team coach, Mr. Martin: I remember Jonesy well. When he joined our team as a sophomore, he was the slowest member of the team. I think it might have been his mega thighs that slowed him down in the water. But that kid never gave up. He stuck with it for three whole years. He never did get much faster. Or win any events. But I just couldn’t cut him from the team, mainly because his dad was an attorney – Mr. Jones would have sued the crap out of me. 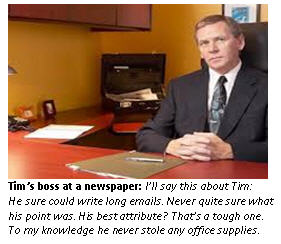 My college roommate, George: My old friend, Timbo. How can I not remember my roomie? He always let me borrow his stuff – like all of his shirts, pants, jackets and shoes. Saved me a ton of money on food those two years, too. I just ate all his stuff.

Hey, Tim, perhaps this isn’t the right time to ask, but since I doubt you’ll be needing your clothes anymore, mind if I take them off your hands? I don’t need your green Nehru jacket, however. And do you still want your 1973 Chevy Malibu back? Sorry about the dented right door.

My college girlfriend, Donna: How can I forget Tim? He had such promise, such potential. A straight-A student who would later go on to get both a Law degree and an MBA! So sad how he squandered it all to become a humor writer. Thank God I didn’t marry him. Thank you, Daddy, for stopping me from making the biggest mistake of my life.

My college girlfriend’s husband: This guy? Are you seriously telling me you went out with this loser? What the fuck were you thinking, Donna? I read his blog a couple times. He’s not even funny. And he apparently can’t even write a post without inserting the word “fuck” gratuitously somewhere. So lame.

Any one of my law professors from The Ohio State University: We’re not quite sure how he got accepted into our prestigious law school. We read somewhere that he even took three years of High School Latin, but he never could figure out the basic legal concept of Quid pro quo. We were shocked to learn that he actually squeaked by and passed the bar exam.  Thank goodness he never tried to practice law. That would have been a disaster.

My racquetball partner, Keith: Tim was an outstanding racquetball player. Fast, precise shot placement, and he always gave me one hell of a challenge. I say these glowing things about Tim because it’s his funeral and my wife told me to make up something nice about the dude. But I just can’t lie. Tim actually sucked at racquetball. But he was a real good loser, I will give him that. I felt sorry for the guy. 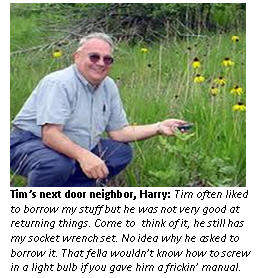 Any newspaper editor to whom I had submitted countless humor articles for consideration: I can’t really say I recall ever reading anything written by Tim Jones. Are you quite sure he submitted something to me? The name doesn’t ring a bell.

My younger daughter Emily: My dad had serious issues about tidiness. I always made a huge mess all around the house, mainly just to piss him off. Now that he’s gone, you gotta check out my apartment. It’s spotless. Not a scrap of food on the floor. Sorry you’re not around to see it, dad.

My older daughter Rachel: Dad, there are so many things I will miss about you – your constant harping about grades; your nonstop speeches about making good choices around boys and sex and drinking. I ignored all of them, of course – because, let’s face it, you really had no idea what you were doing most of the time. But I am going to be a mom someday, and when I am, I’m going to drive my kid crazy with the same rules you tried to impose on me. Hope they have Mountain Dew and frosted cinnamon pop tarts in Heaven, dad.

My wife Michele: Sweetie, I miss you. You always teared up at sappy movies like The Notebook and Love Actually and Die Hard. You always tried to be an involved, caring dad to our girls as they grew up. But would it have killed you to turn off the Seahawks game and take out the trash once in a while? Or make us something for dinner other than spaghetti? And your first grade teacher was right. You really did have the worst penmanship.