Mister Rogers is My Hero 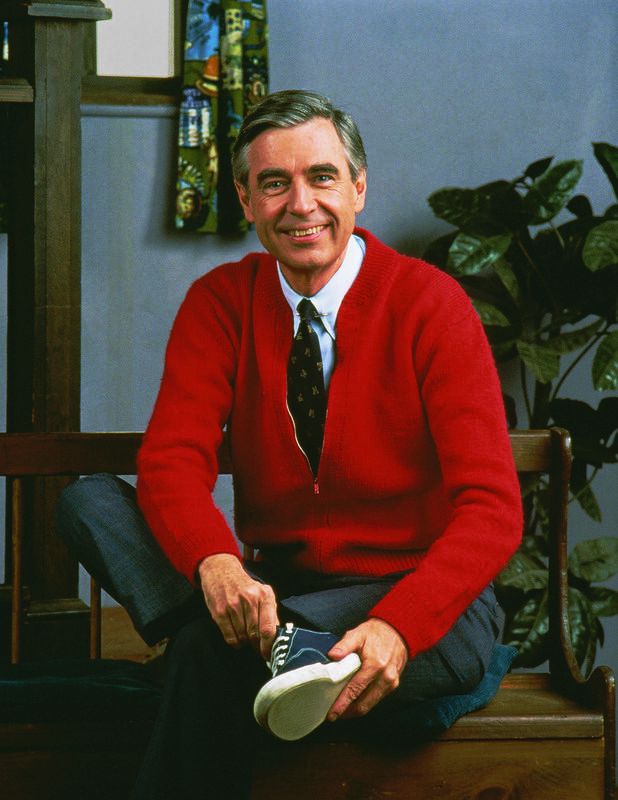 Fred McFeely Rogers, aka Mister Rogers. If you asked me to name a hero, he’s the first person that comes to mind.

“When I was a boy and I would see scary things in the news, my mother would say to me, “Look for the helpers. You will always find people who are helping.” – Fred Rogers

As a child, I never watched Mister Rogers’ Neighborhood. By the time his show first aired in 1968, I was 13. For an awkward teenager trying to fit in, Mister Rogers was the least cool show I could conceive of watching. He was an oddball, with that strangely slow way of talking and those goofy puppets (which I later learned he made himself). His manner was too saccharine sweet. A total dweeb.

Many decades later, I have radically altered my stance on Mister Rogers. Today, I think of him as a hero.

Who was this man with the unfashionable cardigan sweaters (all made by his mother) and his blue sneakers? It turns out the character you saw on TV was exactly who he was in real life. Fred McFeely Rogers was born in 1928 in Latrobe, PA. An only child till age 11, he was overweight for much of his childhood and was often picked on because of it. He graduated from Pittsburgh Theological Seminary and became a Presbyterian minister in 1963.

He later attended graduate school, where he studied child development. This led him to producing to several regional children’s television shows and finally to the iconic Mister Rogers’ Neighborhood, which ran from 1968 until 2001. In his career, he wrote and directed 912 episodes. He composed all the music for his shows and did most of the puppetry. He also wrote dozens of children’s and parenting books on subjects ranging from going to the dentist to coping with bullies.

“As human beings, our job in life is to help people realize how rare and valuable each one of us really is, that each of us has something that no one else has – or ever will have – something inside that is unique.” – Fred Rogers

He received over 40 honorary degrees and countless awards, including being inducted into the TV Hall of Fame in 1999 and being awarded the Presidential Medal of Freedom in 2002. Despite all these achievements and awards, Fred Rogers never let it change the person he was. He was always a safe harbor of hope for children who were struggling. Whether they felt marginalized because of their weight, their skin color, a disability, or a cognitive impairment, to Mister Rogers every child was special and unique. He taught that it was our job as parents to help our kids understand their special gifts and to encourage them to find a positive way to express their feelings, especially ones like fear, anger, anxiety and sadness.

Mister Rogers’ shows were not always sunny conversations about rainbows and kittens. He believed in being honest with children. That’s why he dedicated shows to topics that were often especially difficult for kids to cope with, like the death of a parent, divorce, or being the victim of bullying or racism. When Bobby Kennedy was shot, he devoted an entire show to the topic of assassinations.

“I don’t think anyone can grow unless he’s loved exactly as he is now, appreciated for what he is rather than what he will be.” – Fred Rogers 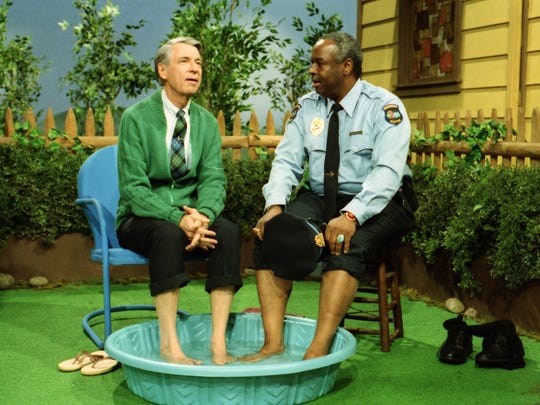 In 1969, when black Americans were still prevented from swimming alongside whites, an episode of Mister Rogers’ Neighborhood broke the color barrier.

Fred Rogers is my hero because he was a paragon of the kind of human being I wish I could be more like. He always preached kindness, compassion, patience, and acceptance of people who were different from ourselves. In these tribal times, Mister Rogers’ optimistic world view is the antidote for our culture of cynicism and intolerance. Mister Rogers always saw the individual first. He taught young impressionable minds to understand the importance of lending a hand to others and seeing the good in them despite – or perhaps because of – their differences.

“Knowing that we can be loved exactly as we are gives us all the best opportunity for growing into the healthiest of people.” – Fred Rogers

Although he was an ordained minister and he kneeled by his bed every night to pray for other people, Mister Rogers rarely talked about religion on his show. He talked about giving to others and forgiveness and how to guide people to find commonality with others, regardless of backgrounds or status. I still can’t watch his signature song, It’s You I Like without tearing up.

To the always soft-spoken Mister Rogers, life was not about winning. What mattered was helping others to win, especially those for whom attaining happiness might seem out of reach. This is the constant theme he preached his entire life, whether on TV or off – the importance of being present and doing what we could to make others feel safe to connect with the world around them. Not only to accept other people’s differences but to embrace them and celebrate them.

“Mutual caring relationships require kindness and patience, tolerance, optimism, joy in the other’s achievements, confidence in oneself, and the ability to give without undue thought of gain.” – Fred Rogers

Despite all his fame and fortune, Mister Rogers lived a modest life. He proposed to Joanne Byrd by letter at the age of 24 and she ran to a phone booth to call him to accept his proposal. They were married for 50 years until his passing. He weighed 143 pounds his entire adult life, perhaps in part because of his daily ritual of getting up at 5:30 every morning to swim laps.

For Mister Rogers, it was never about attaining wealth or fame. He once said, “fame is just a four-letter word, and like tape or face or pain or life or love, what matters is what we do with it.” He has taught me (and millions of others) that the measure of our lives is not our achievements, not how much we earn or the number of awards we accumulate. It’s about the person we become – our character – and ultimately the positive impact we make on the lives of others.

In the recent movie, A Beautiful Day in the Neighborhood, Mister Rogers (played by Tom Hanks) asks his interviewer – and us the viewer as well – to sit quietly, in total silence, for one minute. He asks us to reflect on the people who have made us into the person we are. It is a powerful moment in the film. It led me to thinking about the many people who have cared for me, picked me up when I fell, and supported me to become the person I am today and how blessed my life has been.

Fred Rogers, passed away in 2003 from stomach cancer at the age of 74, leaving a legacy that will hopefully be passed on for many generations. Looking back, I realize the nerdy TV personality who I once thought was totally lame was in a profound way one of the coolest people I’d ever discover. He’s truly is a hero to me.

As I have repeatedly tried – and failed – to live up to the lofty, unattainable example he set, I often think to myself, in a moment of anger or anxiety or disappointment, what would Mister Rogers say? How might he handle this situation? And in that moment, I slow down, take a deep breath, pause, and become, if only briefly, a slightly better person. Thank you, Mister Rogers.