Experts Debate: Is Trump a Lunatic or Just an Idiot? 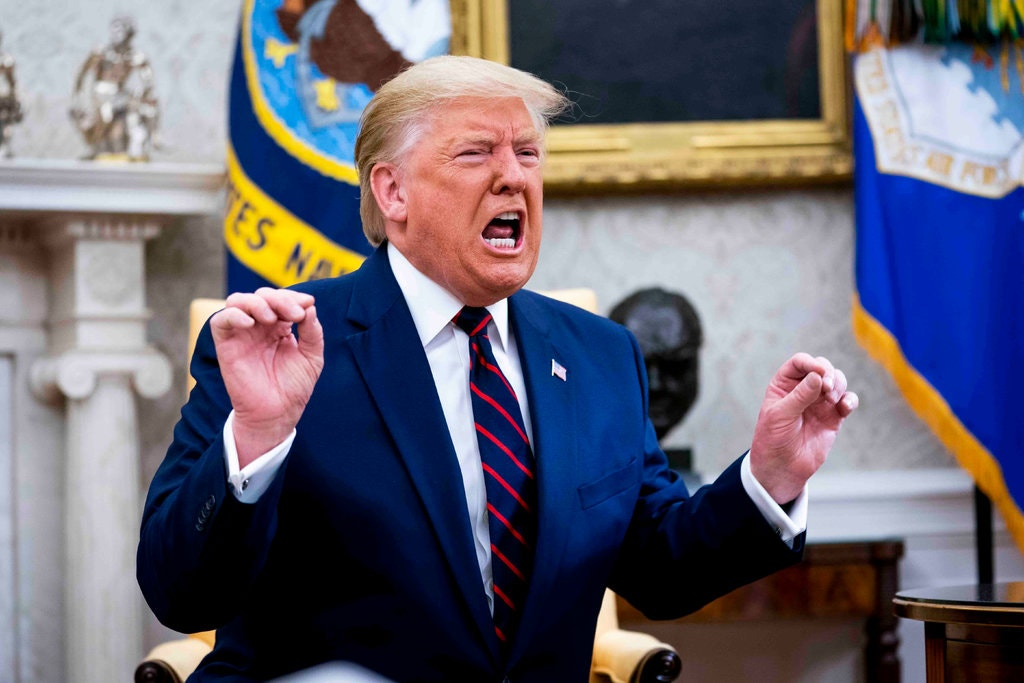 When a reporter asked a question about Syria, the president launched into a 25-minute expletive-laden tirade about the Fake Media, the impeachment witch hunt, and how he was responsible for the Nationals winning the World Series: “I alone could win it.”

During his tenure as President of the United States, Donald Trump has repeatedly demonstrated a tendency toward outrageous and mercurial behavior. He took office vowing to build the now infamous Wall that Mexico would surely pay for. He expressed awe and admiration for Kim Jong-un, indisputably the world’s most heinous dictator. And he has routinely sided with Vladimir Putin against his own intelligence experts – but in fairness, that’s what you do when you want to score points with your boss.

This past July, he demanded that Ukrainian President Zelensky dig up dirt on presidential candidate Joe Biden or else he’d  call Putin to invite Russian tanks to roll in. He even attempted to purchase Greenland from Denmark (in trade for California), then threw a tantrum when Denmark’s prime minister surprisingly responded, “Ummm… no, thanks, bucko.”

One strange episode that took the wind out of their sails for many high-level advisers came when our nation’s “most stable genius” president ever proclaimed himself the nation’s Weatherman-in-Chief, altering a weather map with a Sharpie – and then lying about it – to promote his story that Hurricane Dorian was headed for Alabama. The unprecedented levels of resignations and firings in his first three years in office have led experts to fear that “now that the guard rails are off,” and there are no longer any career professional advisers to steer him away from disaster, Trump will feel emboldened to act on his worst impulses.

Trump’s dubious and inexplicable actions and tweets may be in part due to the mounting pressure he is under facing almost certain impending impeachment. Experts speculate he may be showing signs of insanity. Others offer a simpler theory: Trump is an idiot. It’s become a hotly contested debate.

VFTB News has uncovered several startling instances of Trump’s progressively erratic conduct. In August, Trump, while sitting on the toilet, sent a privy memo to the United Kingdom demanding the Brits publicly besmirch Elizabeth Warren, or else he will have no choice but to release incriminating photos of Queen Elizabeth and her Welsh Corgis in compromising positions, or worse, blackmail the Royal Family into installing Boris Johnson as King.

An anonymous Pentagon source revealed that this past September Trump had issued an ultimatum to Iranian president Hassan Rouhan to come up with compromising information on Bernie Sanders or he’d order the US military to bomb Iran “back to the Stone Age.” He added, “Hey, Hassan, did you know that Bernie is a Jew? So what more incentive do you really need?”

In a move few pundits saw coming, Trump recently announced that, in order to bolster our dwindling military presence in Syria (which he blamed on the Democrats), he will be drafting Pete Buttigieg back into military service to serve his country. Although Mayor Pete was not consulted on this decision and has protested the questionable legality of the president’s one-person draft, President Trump tweeted, “Totally legal. Besides, this proves I support gays in the military. Too bad he’ll be stuck in some sand dune over in Syria and won’t be able to run for president. Sad.”

But the Donald’s browbeating tactics haven’t been limited to undermining his political rivals. We have just obtained a redacted transcript of a White House cabinet meeting in which Trump ranted for two hours and 27 minutes. He threatened that if any Republican Senator votes to convict him in the upcoming impeachment trial, he will cage their children in a detention facility in Texas. In a show of even-handedness, he added that any senator from either party who votes NOT to convict will receive a free weekend stay at his Mar-a-Lago resort – in the penthouse suite – with Melania – no questions asked.

With Attorney General William Barr at his side, Trump has announced that henceforth all Justice Department employees will be required to take an Oath of Allegiance – to President Trump. The oath includes a gag order  to never become a whistleblower – unless they have the goods on a Democratic member of Congress, in which case, they will receive a $15,000 tax refund and box of Trump Steaks.

At a recent rally, Trump drew raucous cheers of support when he proclaimed that if re-elected, he’d repeal Obamacare, leave NATO, get Mexico to pay for the wall, bomb California, and issue a new $1 bill with his face on it, to honor “our greatest president in history.”

More than a few Constitutional scholars have become alarmed by Trump’s recent unveiling of his plan to re-organize the Executive Branch. Effective immediately, Congress will report directly to Kellyanne Conway. Meanwhile, the Supreme Court will report to Ivanka – with a dotted line to Jared. Trump hotly rejected his critics’ claims of unconstitutional overreach, arguing, “The Constitution clearly states under Article 2 that the President can do whatever I want. And nobody knows the Constitution better than me.”

In related news, Trump issued another Executive Tweet announcing his plans to expand the Supreme Court from nine justices to 150, with all future justices to be selected by means of an eBay auction. Furthermore, the Republican Senator willing to pay Trump the highest bribe will get to select their choice for Supreme Court justice. He added, “unless you choose a Mexican, a Muslim or a Lesbo, then sorry, no dice.”

In another sign that Trump might be showing signs of accelerated mental decline, it has just been reported that he has unilaterally ordered the conviction of House Intelligence Committee Chairman Adam “Shifty” Schiff on charges of treason. When asked on what grounds he asserted this charge, Trump shrugged, “The guy doesn’t show me any respect. Besides, Article 2 says I can.”

A moment ago, we learned of this breaking news: a butt dial made by Rudy Giuliani reveals that Trump will soon announce swift retaliatory action against any black athletes who refuse to stand for the National Anthem. They will be summarily deported to an African “sh*thole country” immediately after the election. The president confirmed this, adding, “I hear Cameroni is nice this time of year.”

In other news, this morning Trump warned he will shut down the National Golf Club in Colts Neck, NJ for hiring illegal alien workers – until his Chief of Staff pointed out that Trump actually owns that resort.

In yet another indicator the pressures of the job may finally be getting to him, as the president prepared to Board Marine One this afternoon, he announced he will temporarily free all the illegal immigrant children from their cages and re-assign them to complete construction of his border wall.

He concluded by saying, “If they can finish the wall before Christmas, I’ll give each kid an autographed picture of America’s greatest president. That’s me, of course. Lincoln was so overrated. Everybody says so.”