Stories from the Cat House 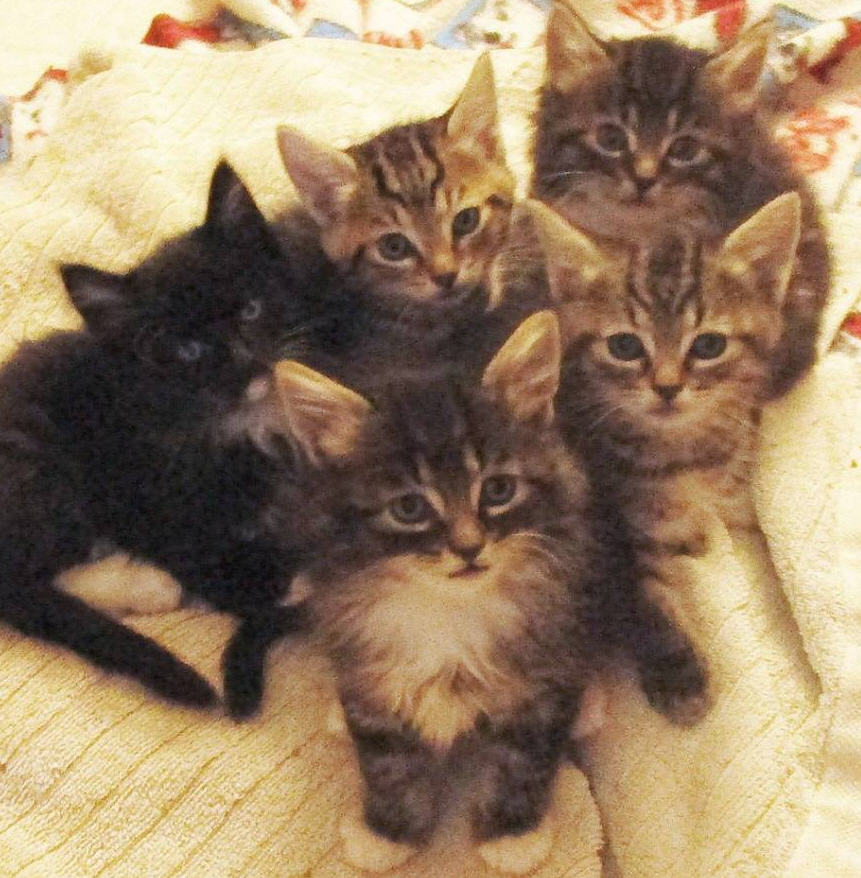 My wife and I foster kittens several times a year. Here are some of our recent guests. I know, they all look so adorable. Don’t be fooled. They’re non-stop eating, pooping machines that will turn your house into utter chaos, or as my wife calls it, “happy pandemonium.”

My wife and I run a cat house. We take in girls – and boys – who were living on the streets and require them to do tricks in exchange for room and board. We’re not proud of this. But we can’t help ourselves. Oh, it’s not what you think. No, we’re not running a brothel. Heavens, No! My wife always reminds me, “We’re never doing that again!”

What I meant was that we rent cats. Okay, some people might call it “fostering.” We take in orphaned kittens and we feed them, cuddle them, and teach them tricks like how to chase a string. Our guests stay about five weeks, after which, having (temporarily) satisfied our craving, we send them back to the local animal shelter. But it is an addiction, and withdrawal is no laughing matter. So, after a couple months, we give in and get another fix of furry toddlers.

Our two adult cats, Zippy and Buddy (former fosters themselves), graciously allow us to invite these occasional intruders. I want to keep them all, but my wife says zoning laws prohibit more than two permanent feline residents per household. Apparently, any more than that would cause a level of chaos and destruction that might threaten world peace – not to mention our marriage.

Make no mistake, my wife likes cats – a lot! If she and I were on a rowboat in the middle of the ocean with Zippy and Buddy, and a big wave washed our cats and me overboard, and she could only save two of us – let’s just say, my wife would probably be remarried by now.

While she likes cats, my darling wife absolutely ADORES KITTENS! That’s why she likes to rent, I mean foster them. Our job as a foster family is to play with the kitties and get them used to humans, so that I can fall in love with them and get my heart torn out when they inevitably journey back to the shelter to find permanent homes.

I’ll be the first to admit, fostering kittens is a lot of fun. But it’s also a lot of work. That’s why my wife and I divide up the tasks evenly. I’m responsible for feeding, scooping the litter, replacing said litter, cleaning the ubiquitous poop skid marks off the floor, sweeping the strewn litter bits, and picking up countless bits of shredded paper the kitties create. The above tasks need to be done roughly every 30 minutes. My wife willingly shoulders the arduous chores of patting and nuzzling the kittens and posting adorable photos of them on Facebook. 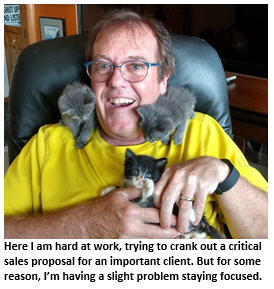 If I may, I would like to circle back to the part about feeding and scooping. The kittens are often only two weeks old when we receive them. Sometimes they are so tiny we must bottle feed them. But once they can consume solid food (around three weeks), their appetites are insatiable. A litter of six kittens can easily go through eight cans of moist cat food and three cups of dry food in a day. But they poop out roughly five times the volume they consume – something scientists have never been able to explain. With any luck, by the time they are ready to leave us, most of the kittens know how to  dutifully excrete their poop within a foot of the litter box.

Our temporary house guests typically overcome their fear of us very quickly. By the second week, they’re routinely navigating up my pant leg, headed for my shoulders. Which brings me to the topic of claws. Did you know that kittens don’t know how to retract their claws? Me neither. I like to wear shorts. Imagine, if you will,  self-propelled razor blades covered in fur scaling your unclothed limbs. In no time, I look like a badly abused scratching post – only with far more blood.

Things tend to get a bit complicated when Buddy realizes we have visitors. Everyday it’s the same pattern: He stands outside the door to the guest quarters and whines incessantly until we let him in. He looks at the kitties with an approach-avoidance mixture of fascination and fear until eventually several of them start chasing (and biting) his tail, at which point Buddy freaks out and bolts. Then 30 minutes later, he wants back in again. Go figure.

Kittens are naturally curious and adventurous – especially as they reach four weeks of age. This is when they develop an urge to go walkabout and explore EVERYTHING. They climb, leap, and knock over anything they can get their mouths on. They will play with anything they stumble into – except cat toys, of course. They will entertain themselves for hours, batting around an empty toilet paper roll, a rubber band or a twist tie. And they are masters at chewing on electrical cords, scratching the wood furniture beyond repair, and getting stuck underneath the couch and other impossible-to-extract locations. At this age, they have only two modes: Total pandemonium and coma. There is no in between. 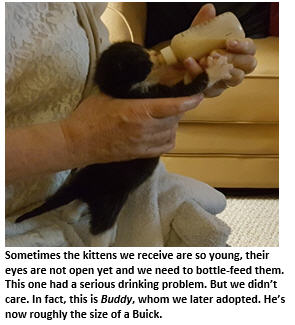 When our short-term residents reach two pounds (around eight weeks), it’s time to take them back to the animal shelter to find forever homes. And this, for me, is by far the most difficult part. Because every time we foster, I get emotionally attached. I always want to keep some. My wife rationally insists we have plenty of cats already. Our negotiation sessions typically go something like this:

Me: Let’s keep all six of them. They’re soooooo adorable. Can we, sweetie?

Michele: No. We already have two cats. That’s plenty.

Me: Okay, you’re right. So, how about we just keep two kittens?

Michele: No. We already have enough cats.

Me: I hear you. Final offer: Let’s keep just one.

In the end, we reach a compromise, by which I mean we don’t keep any. We go through this dance whenever we foster. Every time, I tell myself I won’t get attached, and every time I fall hopelessly in love with every one of them.

By the time you read this, our house will probably be teeming with our next set of furry visitors. I already know my wife is going to say no, we can’t keep any furballs. But I have a plan. I know some embarrassing details from her past that I just might “accidentally” post to her timeline on Facebook – unless she agrees to let me keep one. So, we can do this the easy way or the hard way. It’s totally up to my darling wife. Meow.