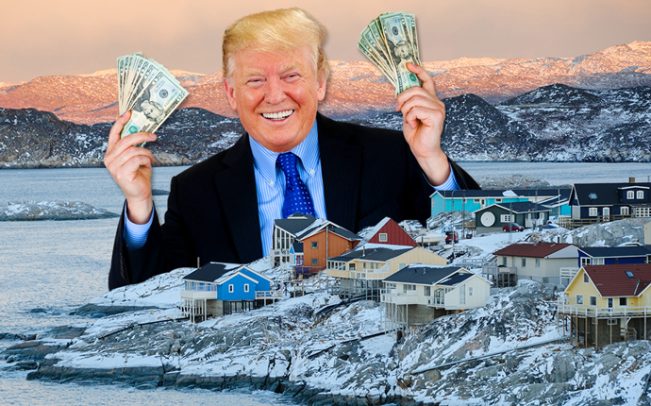 Initial errant remarks by Danish Prime Minister Mette Frederiksen suggested that Denmark’s large, ice-covered autonomous territory was not for sale. However, Trump Organization officials are pleased to report that after six hours of intense negotiations and name calling, the President was able to purchase Greenland for the bargain price of $500 billion – after turning down Denmark’s initial offer of $400 billion. Trump had to sweeten the deal by furnishing the PM Frederiksen with her own lavish penthouse suite – and giving Denmark full title to California.

Skeptics expressed concern about how The Donald would raise such vast funds, given our current deficit crisis. The President quickly reassured Americans that he will simply divert hundreds of billions previously set aside for Social Security. He tweeted, “Social Security is a socialist anti-American scheme. It even has the word ‘social’ right there in its name. Lame.”

“This is a great win for me, I mean for the United States of America,” said our Commander-in-Chief, who also proclaimed that “this is the greatest single real estate deal in history – way better than when we bought Manhattan from the pre-Americans. And it’s way more bigly than the Louisiana Purchase deal with the French. Whoever even heard of the country of Louisiana, anyway! Boring.”

Greenland’s population is a mere 56,000 folks (about the attendance at a sold out New York Mets game). But it’s geographically huge, roughly the size of western Europe. An added plus: It comes with virtually none of those pretentious Parisians or bombastic Brits.

Some economists had questioned the wisdom of spending half a trillion dollars to acquire a barren, rocky, arctic landmass, of which 85% is perpetually covered in ice. But, in a rare moment of environmental awareness, the President explained that because of the rampant acceleration of global warming, Greenland’s ice sheet, which is melting at a fantastic rate of 12 billion tons per day, will soon be history.

“In less than 20 years, Greenland will truly become a GREEN LAND again, get it?” quipped the President, making one of his signature hilarious jokes. He pointed out that all this emerging greenery, coupled with the projected two-foot rise in the earth’s sea level will make Greenland the perfect vacation destination for golf, tennis, and real family fun: harpooning for dolphins.

Taking questions before boarding Marine One, the President added, “Think about it. Where are you gonna go on vacation when Miami and Aruba are two feet under water? Answer? Greenland. Problem solved!”

Trump described how Greenland’s craggy coastline will make the perfect backdrop for oceanfront condos, five-star restaurants and Benetton shops. Projections are that labor costs will be minimal because most Greenlanders are unemployed and would be eager for any job. “We plan to pay them in halibut and reindeer meat. They’ll be thrilled just not to be starving,” said Donald Trump Jr., himself a noted wildlife enthusiast and the person President Trump has tasked with launching the construction of Trump Greenland. 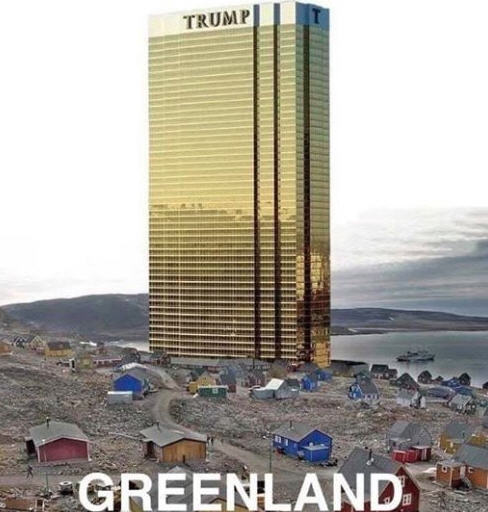 An artist’s rendering of the first of five planned resort hotels to be built at Trump Greenland. Every effort will be made to ensure the resort blends in with the natural surroundings.

“Greenland is an exotic land filled with calving glaciers, flowing fiords and snow-capped mountains”, spouted Jr. “The new and improved Trump Greenland will host nature tours via helicopters and snowcats where families can hunt down their own endangered polar bears for their trophy walls back home. Come see all this incredibly pristine arctic beauty – before it’s gone!”

Advanced promotional literature claims that when Trump Greenland opens, it will be like no other golf-tennis-casino resort in the country – because it will be the only golf-tennis-casino resort in that country. The native Greenlanders are warm, gentle people. And you’ll have plenty of opportunities to get to know them up close as they refill your margaritas and take your bets at the Reindeer Roulette table.

And the food is to die for! If you’re the adventurous type, why not try the Mattak (whale skin) served raw with a mild otter sauce. Or sample the national soup of Greenland called suaasat, made from 100% natural ingredients: seal, reindeer, and tundra swans – lightly breaded. Then again, if that’s not to your taste, sink your teeth into a thick juicy Trump Steak (a few crates remain from the failed 2007 launch of Trump’s branded beef).

At a press conference, the president’s newly appointed Prime Minister of Greenland, Ivanka, unveiled a gorgeous architectural rendering of the planned resort, which will feature two tasteful 60-foot giant gold-plated whale statues at the main entrance, blowing poker chips out of their blowholes into a glacier-fed fountain. She announced that construction is expected to begin just as soon as the engineers can figure out how to load the 20’x30’ hotel windowpanes onto dog sleds.

The President then patriotically tweeted, “Come to my newest property, TRUMP GREENLAND, and together let’s MAKE GREENLAND GREEN AGAIN!”

Negotiations will soon be under way for Trump’s next world-class four-season resort. He is actively pursuing the purchase of a large, remote, unheard of island continent in the Pacific – provided Australia’s Prime Minister Morrison ever answers Donald’s phone calls.