My Shopping Experience That Went Off TARGET

Read my cautionary tale about my visit to a particular retailer (whose name I won’t reveal) in an attempt to redeem a gift card. It was a snap, if by “a snap” you mean as simple as deciphering the Da Vinci Code.

Recently, I had a rather unpleasant shopping experience involving a well-known retail establishment. I’d rather not mention the store by name, as I would hate for others to TARGET this chain with well-deserved, snarky tweets.

It started with a gift card from a friend for Christmas. A delightful surprise. But the process I endured to redeem it was, well, let’s just say I’ve had root canal surgeries that were more pleasurable – and took a lot less time.

Here’s what happened. My friend – whom I’d like to assume had positive intentions – gave me an online gift card to use at the afore-not-mentioned giant red & white-colored discount retailer. I printed it out and proceeded to the nearest store. I wandered through the aisles, stocking my cart with exotic splurge items like paper towels, light bulbs, and a plastic waste basket. Okay, so I lead a dull life.

I reached the checkout counter and presented my printout, showing the amount, bar code, and a couple long numbers, identified as the “gift Identification number” and “PIN code.” The cashier greeted me cheerfully. I figured I’d be in and out of this store in under 30 minutes. But the universe had other plans for me that day.

For some inexplicable reason, the computer system would not accept my gift card. The cashier pressed button after button, to no avail. Five minutes turned into ten, and then fifteen, as the number of customers queueing up behind me enlarged to nine. I’m sure they were all delighted to have me clogging up the works, especially the mom with the four kids all under seven who were melting down because of the “jerky old man” (an actual quote) who was making everybody wait.

The cashier – not so cheerful now – called a supervisor, who mercifully took me out of that line and resumed the process at a different counter. I was confident she would have me on my way in no time. “No time” morphed into twenty minutes and still no success.

She finally concluded I would need to walk over to the Guest Services counter and talk to a higher-up supervisor. Thankfully, there were only fourteen people ahead of me. 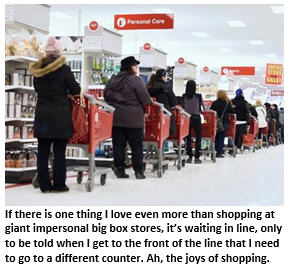 Twenty minutes later, I reached the front of the line. I explained my dilemma for the third time. “No problem, sir. We should have you out of here in a jiffy.” I have learned over the years that the phrase “in a jiffy” usually means “we hope you don’t have any other plans for the rest of the day.”

Now this next part may come as a surprise, but even the Guest Services supervisor was unable to figure out the problem. I asked him if he could just tear up my gift card and issue me a new one in its place. “I’m sorry, sir, but I’m not authorized to do that. You would have to talk to a manager.”

“What an excellent idea,” I exclaimed in relief and then proceeded to wait another ten minutes for his manager to arrive. She concluded, after several futile attempts at troubleshooting, that “This is an online gift card. You need to have the actual email that was sent to you. Do you have that email with you?” Of course not. So, I called my wife, who eventually was able to track down the email on my computer and forward it to my phone.What happened next may come as a surprise to you. Even with the email, the system still would not accept my gift card. The manager was puzzled. I was … well, words fail me. I once again suggested, “Wouldn’t it be a lot simpler if you just voided out my gift card and gave me a new one, so we could both be on our way?” She replied, “I’m sorry but I don’t have the authority to do that.” Apparently, the only person with enough security clearance to issue such a directive is the Secretary of Defense at the Pentagon, but he was not available at that precise moment.

Finally, this manager’s manager intervened and said, “You need to have our store’s app installed on your phone to use this card. Do you have the app on your phone?” Of course not. So, I searched for the app and started the download process.

Over the course of the next ten minutes, the app’s download status had only reached 12%. I asked again, “Are you sure you want us both to wait while this installs? At its current rate, it’s a coin flip whether it will be complete before your store closes.” Her response was, “Perhaps you should try using our WIFI network. It might speed up the process.” So, I connected to their WIFI, and like magic, in only another twenty minutes, we had zoomed to a download completion status of 25%. 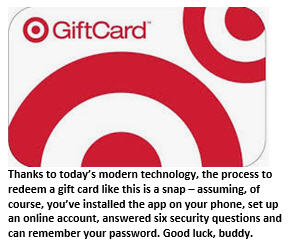 Finally, 75 minutes after I had arrived at Guest Services, I had the app on my phone. Even then, their computer system still rejected my gift card. “Oh, you need an online account with us to redeem the gift card. Do you have an online account?” Of course not. Or at least I thought so, until when I created an account, it told me this account was already in use.

It took less than twelve more minutes to go through a series of additional hoops to reset my password, input a verification code, answer some security questions to prove that I was not an illegal refugee-terrorist, and recite the National Anthem. Then Voila, the gift card went through.

In less time than it takes to swim the English Channel, I was in and out of the store. Oddly, not once during the entire grueling several-hour experience did any of the five sales associates or managers offer up an apology of any kind. But in fairness, the manager said, as I left the store, “Thank you for shopping at ******” [name of the store removed to protect their horrible reputation].

So, the next time you want to purchase a gift for someone who, frankly, annoys you, might I suggest an online gift card from the store that shall not be named? I have a feeling your present might just hit the TARGET.