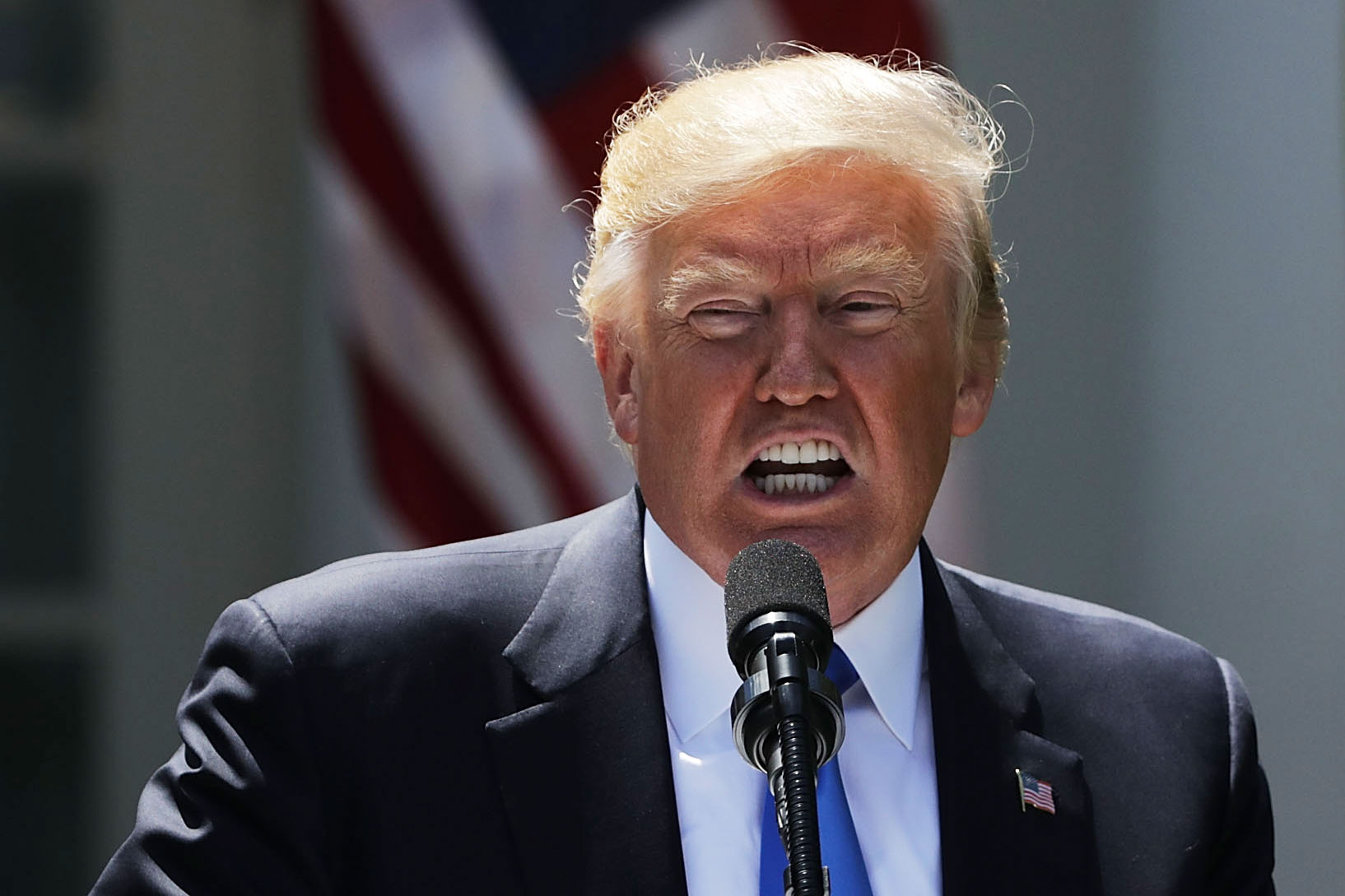 March Madness – a term that to millions of Americans means a time of excitement and anticipation as they root for their favorite basketball team. Or, in the case of our president, it refers to any random day between March 1 and 31.

It’s that time of year when millions of Americans take off early from work, head to the nearest bar, grab a seat in front of a large screen TV and go crazy with March Madness – perhaps the most exciting sporting event of the year. No, not the NCAA tournament, silly! I’m talking about the Big Show, MAGA March Madness.

Robert Mueller has officially submitted his report to Attorney General Barr. Now multiple congressional committee hearings are gearing up to subpoena witnesses and documents to determine who the most culpable parties are.

Throughout this saga, an entire nation will be fixated to see who the winners and losers are going to be in the epic legal and political battle about to unfold in Congress and in the courts. Office pools will form, as people place their bets on whether Donald Trump will survive the gauntlet of highly motivated opponents hoping to bring his reign as champion to an end.

View from the Bleachers, long recognized as the definitive source for inaccurate, sophomoric and wildly misinformed journalism, is pleased to be the first major (or minor) media organization to announce the 2019 MAGA March Madness Tournament Bracket pairings. First, here’s a peak at this year’s regions:

Here are the official bracket pairings, as announced by ESPN and the Justice Department: 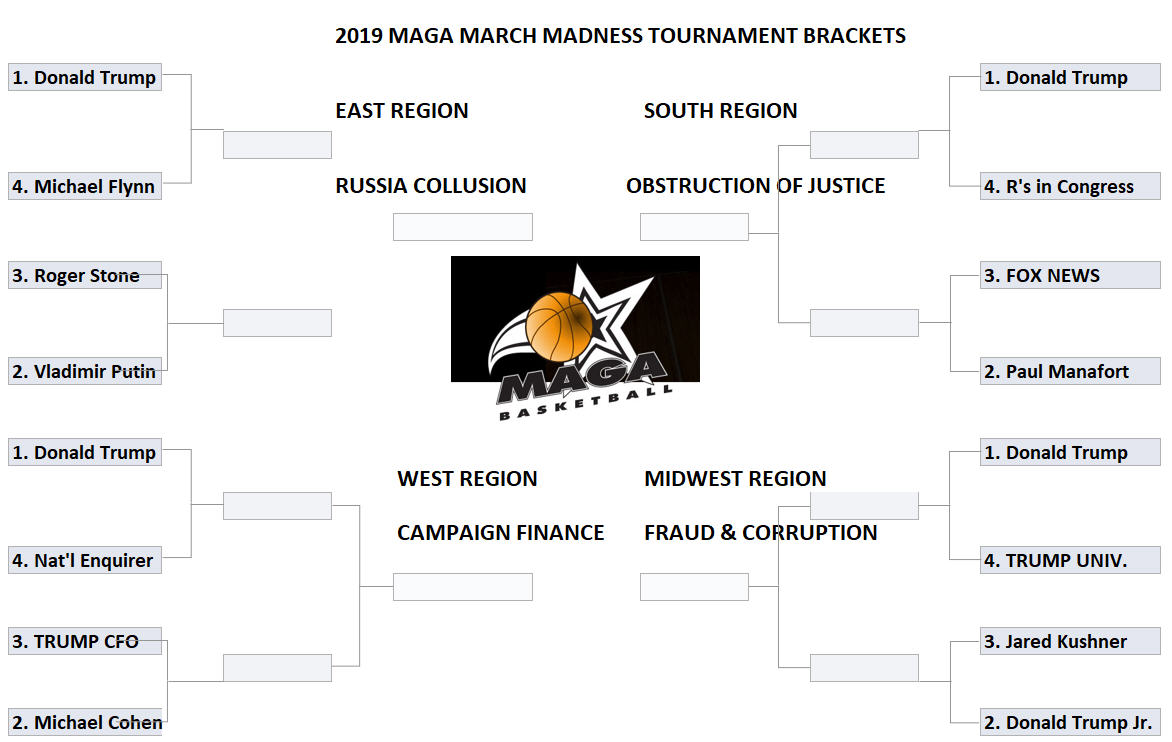 All sixteen teams selected are formidable competitors. Any one of them has the track record to make it to the finals. But there was one surprise in this year’s pairings: For what is surely a first in the history of the March Madness tournament, one team has been assigned a spot coming out of all four regions – Donald Trump.

This would seem at first blush to give him a significantly unfair advantage over the competition. In response to fan protests, Trump said he earned this special seeding since he’s the world’s best deal maker. Indeed, one need look no further for proof of this than his tremendous success negotiating with Kim Jong-un. When asked in a press conference why he got so many slots, Trump simply smiled and remarked, “I deserve it,” adding, “No one is more deserving than me.”

In the West “Campaign Finance Violations” Region, Trump faces stiff opposition from several teams that he claims have been lying about his accomplishments for much of the past season. He contends that, “in the spirit of fair play”, they all should be eliminated from the tournament (and jailed), starting with his former attorney and fixer, Michael Cohen. But the committee has decided to let them play despite the President’s repeated ALL-CAPS tweet storms protesting, “SO UNFAIR! #SAD! #MAGA!”

To be sure, the Midwest “Fraud & Corruption” Region is no sleeper bracket either. It contains several high-powered opponents whose history of success and achievement Donald Trump has pointed out repeatedly (and taken credit for). One team to watch closely is First Son-in-Law Jared, whom Trump hired as a special advisor to handle all domestic and international affairs of state, so that Donald could focus on the most pressing demands of his presidency – tweeting, binging on Fox & Friends in his pajamas, and golfing.

Still other pundits argue that the region to look out for is the South: “Obstruction of Justice”. This field contains an embarrassment of riches. In fact, even the 4th seed – Republicans in Congress – is a serious contender to wrap up this bracket if Trump falters. This team has done a remarkable job over the past two years of slowing down any and every congressional investigation into the Trump campaign or presidency. They are in many ways the perfect complement to Team Trump’s corruption and obfuscation in that they never utter an uncomplimentary word about their Commander in Chief.

Still, many experts feel that the most compelling battle may emerge from the East: “Russia Collusion.” While Trump is the top seed in this region, many sports commentators make the case they should have given the top spot to Russian President Putin arguing that Trump is just following Putin’s game plan.

In examining the final bracket pairings, the committee had to make several difficult decisions as to who to let in and who to eliminate. Some noteworthy obstructers and fraudsters who ended up on the outside of the bubble looking in include First Daughter Ivanka Trump, Commerce Secretary Wilber Ross, Blackwater founder Erik Prince, foreign policy adviser George Papadopoulos, and dozens of Russian operatives, to name a few. The committee apologized to the aforementioned teams, acknowledging that they were all highly worthy of consideration in this prestigious field of schemers, liars, evaders, enablers and sycophants. But their efforts fell slightly short of the high bar of corruption needed to make the final selection. Maybe next year.

Who will win the prestigious MAGA trophy? That’s anybody’s guess. But President Trump, the number one overall seed, has repeatedly predicted that in the end, he will triumph. He has called all the other teams opposed to him losers and has declared that he is the only true WINNER in this tournament, and after he wins, he plans to finish building the Wall, which, by the way he tweeted is already mostly done.

Trump added, “If I don’t win the championship, then it just means it was rigged. Fake Refs. Hillary’s emails. #Lock her up!” Despite the end of the Special Counsel investigation, the congressional committees are just getting ramped up, so it’s way too early to know who will come out on top in the finals.

Let the games begin. Don’t forget to send in your own bracket picks, along with a check for $500, to VFTB’s MAGA March Madness tournament pool. The winning entry just might win the restoration of democracy in America (unless Trump wins, that is, in which case God help us all). Send in your brackets to NoOneIsAboveTheLaw@InPrisonYouCantTweet.com.