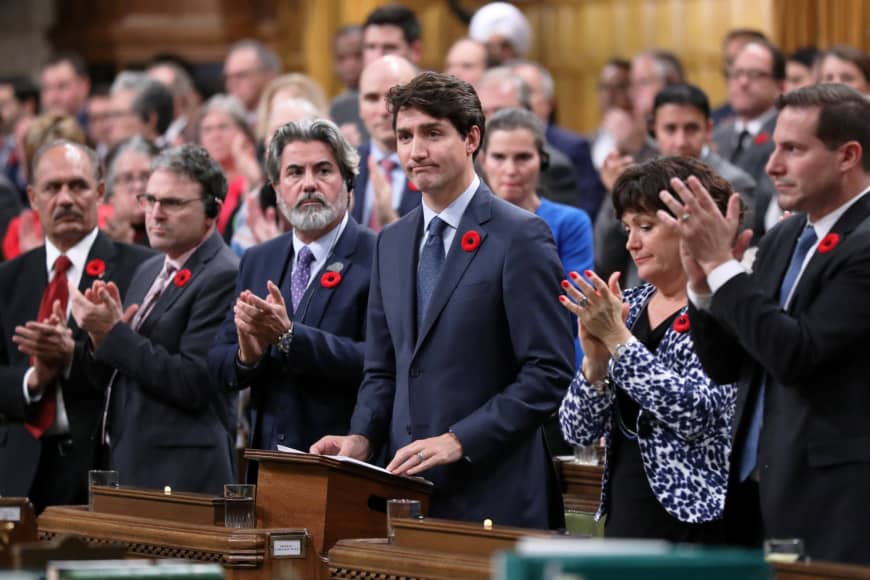 Prime Minister Justin Trudeau announces he’ll erect a southern border wall to protect Canada from all the invading caravans of desperate Americans fleeing the US in search a sane safe haven — and better quality beer.

Ottawa – Today, Canadian Prime Minister Justin Trudeau delivered a landmark speech to the combined chambers of the Canadian Parliament. He announced his plans to erect a 50-foot-tall wall along the entire length of the USA-Canadian border to keep them safe from the hordes of Americans fleeing the USA. Countless numbers are seeking asylum in Canada, widely considered the last remaining enclave of sanity north of Mexico.

Canadians were initially enraged when the Prime Minister’s address cut into an intermission of the Maple Leafs – Oilers game. Mr. Trudeau began his ten-minute speech in the traditional Canadian manner, by apologizing for interrupting TV coverage of the Zamboni re-surfacing the ice rink.

In his remaining 90 seconds, he was resolute. “In recent months, with all the erratic behavior coming out of the White House in Washington, DC, it has caused tremors throughout our great nation. Our fine people are increasingly fearful that Donald Trump may destroy the world economy, start a nuclear war, or worse yet, attempt to visit Canada.

Canada’s charismatic leader pointed to indisputable evidence of massive caravans trying to breach their perimeter. “They’re filled with lots of scary, dangerous people heading straight for our defenseless southern border. Some really bad people, ya’ know? So, I have no choice but to place the safety and security of our people first.” According to fact checkers, he apologized twenty-three times during his ten-minute presentation.

Trudeau pointed to the latest news stories reporting thousands of Americans in Honda SUVs and Subaru Cross-overs closing in on the Great White North, with several invaders known to be aggressive hand-shakers.

“The television footage of these desperate Americans fleeing their cities for a safe haven breaks my heart,” the Prime Minister went on to say, “but who knows how many bad hombres are hiding in their ranks. I have received reports that former US Defense Secretary James Mattis was spotted attempting to sneak into Windsor, Ontario, with a Canadian flag on his bumper. Thankfully, he was caught and sent back to Detroit – with our sincerest apologies, of course. God only knows of the arsenal of deadly weapons he might have had in his trunk!” 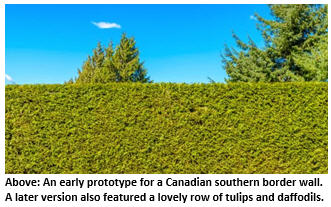 The USA-Canada border is the longest unprotected international boundary in the world, stretching over 8,891 kilometers (5,225 miles). Skeptics point out that this wall will likely cost more than $50 billion to build – although financial analysts calculate that after the exchange rate, this works out to roughly the cost of building a Dairy Queen store.

Other experts argue the costs could quickly spiral, thanks to Canada’s notoriously complex set of requirements to hold community hearings to solicit local citizenry input, conduct land surveys to ensure minimal environmental impact, and arrange for the mandated hearings so that all ethnic, religious, and tribal minorities can air their grievances – not to mention all the fuss involved to arrange for tea with the Queen.

Trudeau unveiled architectural renderings of what the wall may look like. A popular proposal calls for building it with hockey pucks – one of the most impenetrable substances known to man. A competing plan calls for the use of beaver tails – which at first did not sound particularly effective until it was explained that the tails would be attached to live beavers – seriously pissed off ones at that.

In addition, plans call for regular patrols by Canadian Mounties on mooseback, to ensure that any American terrorist who somehow scaled it would be caught quickly and forced to eat poutine – without cutlery. Of course, the Mounties would have weekends off, because, well, everyone deserves some down time. 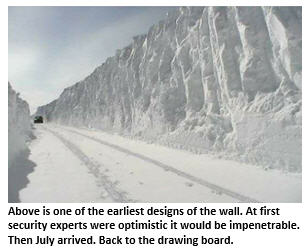 There are some minor logistical issues to be worked out, such as how to ensure the barrier will span Niagara Falls or protect the craggy coastline of Newfoundland. But the Prime Minister assured both members of the Canadian media still in attendance at the end of his speech that these concerns were being studied by a diverse, representative committee of veterans, hockey moms, drunken curling fans, and Canadian Tire store clerks.

Trudeau pointed out a possible glitch with Nova Scotia, whose residents are demanding that the province instead put up a charming white picket fence with lots of bird feeders because, they said, “well, that’s just what polite neighbors do, don’t ya’ know?”

A question some members of Parliament have raised is who will build the wall. Trudeau explained, “I will draw on all possible resources to complete this critical venture. That’s why I’m ordering the entire Canadian Armed Forces – all 752 men and women – to report for duty at their local Tim Horton’s donuts shop starting next week. For their troubles, we will give them each a week’s rations of Timbits donuts.”

Perhaps the most contentious question raised by cost-conscious Canadians is who will pay for this endeavor. “I’ve given this serious deliberation,” Trudeau reassured the nation. “It seems to me, if America is going to build a southern border wall and make Mexico pay for it, then we should adopt a similar approach. That’s why I will insist that Donald Trump pay for this entire project! I will apologize for the inconvenience, of course. But Donald made it clear at our first meeting that he’s an extremely wealthy, successful businessman, so I’m sure he can afford it.” 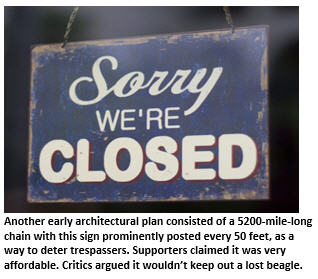 When asked for comment about Canada’s proposed border wall, President Trump responded, “Who’s this Justin fellow? Isn’t he a singer?” When it was explained that he is the Canadian Prime Minister – and shown a map pointing out the location of his country’s northern neighbor – Trump added, “Are you sure? I’m pretty sure that’s part of the USA. Isn’t that Montana?” he asked, pointing on the map to Saskatchewan.

The Prime Minister concluded his press conference with words of encouragement. “Join me, my fellow Canadians. Let’s build that wall, and together we will Make Canada Safe Again!”

In other news, plans to build a 50-foot-tall concrete barrier around the perimeter of the White House’s Oval Office – to protect the United States from its occupant – are currently being hotly debated in Congress.

Democrats appear to have the votes needed to pass this legislation in the House. The challenge will be in the Republican-controlled Senate, where Republicans are pushing back, insisting the wall be made of steel slats, which they argue are much stronger.

Tim’s buddy Mark Gravel (whose mental health has long been in question) conceived the idea and co-authored this post. Mark hails from Montreal, Canada. With a heart for community, Mark spends extra hours as a self-appointed and little-respected judge of street-entertainers. His self-described mission is to save them the pain of even thinking of auditioning for The Voice by belittling them well before their creative spark potentially blossoms to confidence which he feels, only leads to more bad TV.