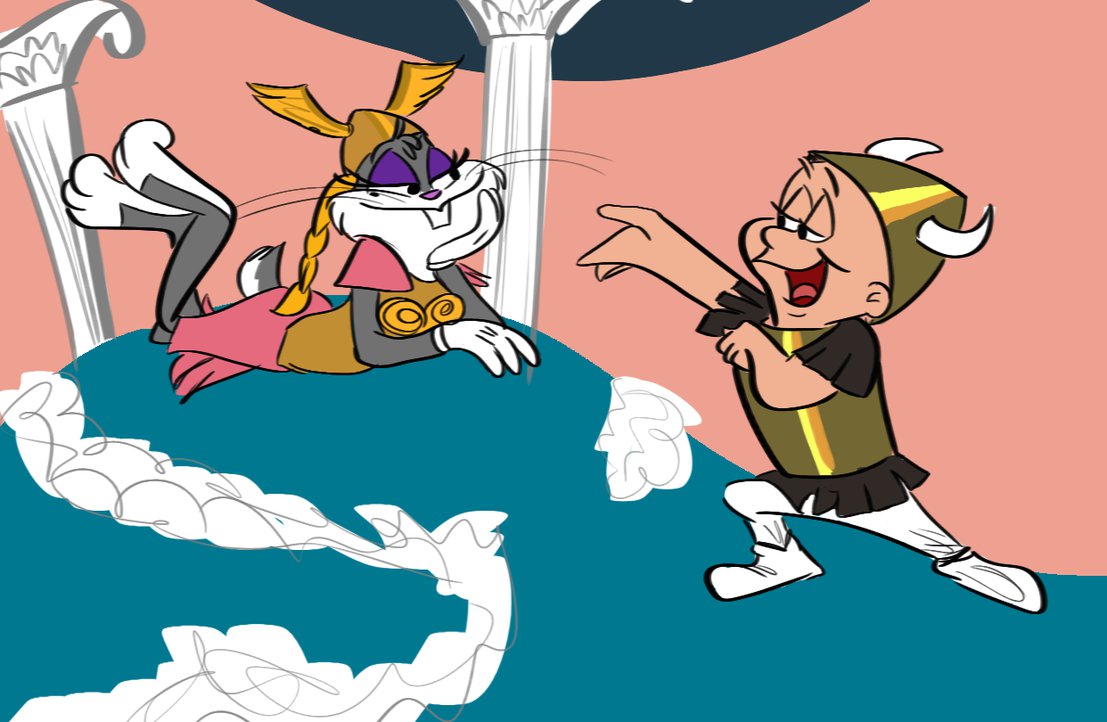 We attended one of the most famous operas ever written: La bohème, by Puccini. Now, in my defense, I was only half-listening when my wife suggested the event. I heard something about Bohemian and mistook it for the recent movie, Bohemian Rhapsody, about Freddie Mercury of the rock group Queen. Turns out the only thing this opera had in common with Freddie was that the lead tenor had long hair and liked to strut around the stage a lot.

Like last time, I had no idea what the performers were singing because everything was in Italian. Fortunately, they displayed a translation on a screen above the stage, which would have come in handy – if only I knew Spanish.

My wife told me that the ordeal … er… opera might be more enjoyable if I read a synopsis beforehand. So, let me save you some time with this quick recap: 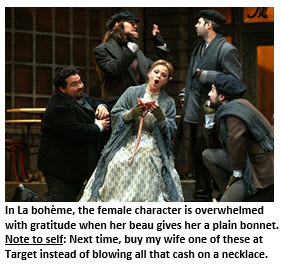 ACT I: Four poor artsy kinds of dudes are living together in a Paris apartment. It’s winter and very cold out. Three of them go out to get wasted. Rodolpho stays behind. A girl (Mimi) knocks on the door because her candle went out. He opens the door. They fall in love. Ah, yes, the old “my candle blew out and I can’t light it myself” ploy. A classic chick move. That’s exactly how my wife ensnared me.

ACT II: It’s Christmas Eve. Rody buys Mimi a bonnet. She acts like he just bought her the Taj Mahal. Take a chill pill, lady. It’s just a hat. He probably picked it up at Wal-Mart in the clearance bin. Meanwhile, some rich woman in a red dress makes a scene about her meal and trashes a plate while singing about love. Stay away from her. Pretty sure she’s psycho.

ACT III: Fast forward a couple months. For reasons never explained, apparently Rody now hates Mimi. Wha? Then Mimi pleads with Rody’s friend “Why does he hate me?” – only it takes her five minutes and 37 seconds singing at the top of her lungs to make this point. Then we learn Mimi is dying. Then Rody decides he loves her again and they reunite. Make up your mind, dude, for goodness sake. I think he may have commitment issues – it’s easier to pledge his undying love to someone who’s a goner anyway.

ACT IV: Fast forward to early summer. Two of the drunk guys from Act I are engaging in a mock sword fight using a loaf of bread and a herring. I have no idea why. In opera, a woman will devote six minutes singing about the virtues of a cloud, so you’re asking the wrong guy if you think I can make sense of this plot.

Mimi starts feeling better. Uh oh. Now she’s dying again. The whacko lady in the red dress from Act II is back. She buys Mimi a furry muff, like that will help her feel better. Good luck with that. Maybe she’s hoping Mimi will bury , er, muffle her annoying sobs in the fur. Despite the lovely gesture, Mimi dies anyway. Rody sings about how sad he is to be stuck in an opera that makes absolutely no sense (according to the Spanish translation). – THE END

So, guys, if you enjoy sitting through 3 hours and 25 minutes of a show about bonnets, broken plates and furry muffs in which everybody dies or cries, then you’ll love opera. If you find yourself forced to endure a vibrato-ridden sing-off between a pompous tenor and a pretentious soprano, here are a few tips on proper opera etiquette:

These events are long. I’ve seen salmon head out to sea and return to spawn in less time. So, be sure to use the restroom ahead of time – or at least bring a bottle under your coat you can discreetly pee into if you just can’t hold it in till halftime. 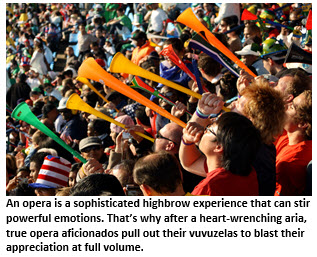 When watching the game on your phone during the performance, keep the volume down and avoid shouting “TOUCHDOWN!!!” Simply turn to the stranger sitting next to who has been peering excitedly at your phone and offer up a high five.

It is considered discourteous to start a WAVE while the performers are singing – unless you’re seated in the balcony, of course. Then by all means, go for it. They won’t notice you up there.

It’s frowned upon to engage in a betting pool as to when in Act IV the Prima Donna will bite the dust. A more appropriate pool might be which act will your wife catch you snoring.

Do not throw stuff at the stage. This isn’t Rocky Horror Picture Show. Show some respect. But if you absolutely must toss something at the stage, I suggest a bonnet or a furry muff. Apparently, Mezzo-Sopranos really swoon over these things.

If you must go to the opera, keep an open mind. You might actually surprise yourself and thoroughly enjoy it. Just kidding. Seriously, bring earbuds and load the NFL Network app on your phone. You’ll thank me later.

NOTE: If you’re a sucker for punishment, read about my first opera experience, A Night at the Opera.