Thanksgiving at the Casino 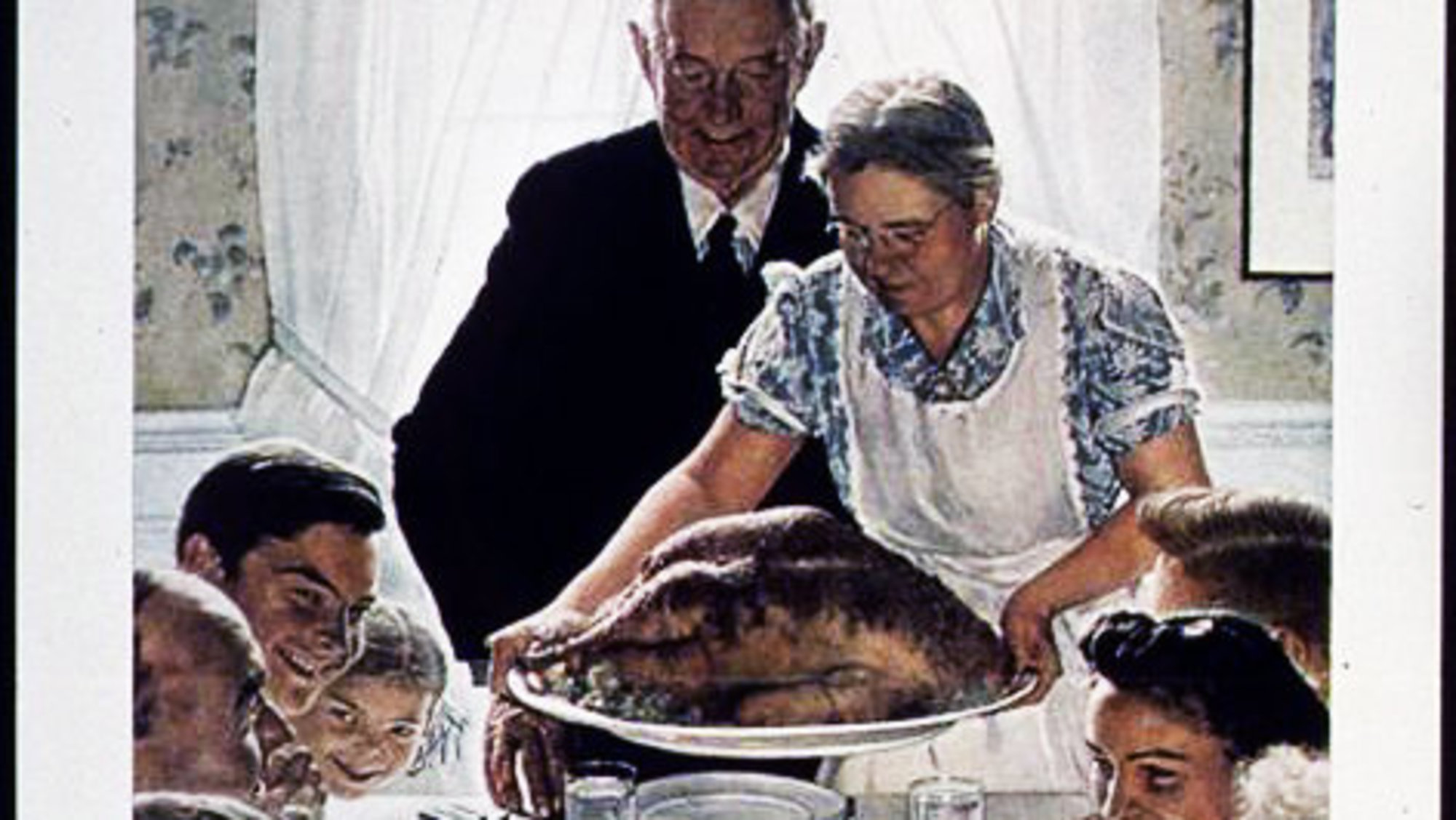 Ah, a traditional Thanksgiving dinner, where the wife does all the work and the husband just carves the bird, then watches football. But this year, our Thanksgiving was nothing like this scene. Not even close.

Every year for as far back as I can remember, we’ve had company for Thanksgiving. But for the first time in our 31 years of marriage, we’d be quietly celebrating alone, just the two of us – and our cats. Where were our daughters? I guess, being adults and having their own incomes inspired them to make other plans. We will cherish their texts from Florida.

Then the day before Thanksgiving, we received an invitation from two friends whom I will call “Dave” and “Susan” (out of respect for Terry’s and Sharon’s privacy), to join them dining out for Thanksgiving.

Of course, I had to decline this generous offer. I had already made exciting plans to prepare Michele a home-cooked meal of microwaved turkey pot pies with peas, accompanied by Uncle Ben’s rice pilaf. Strangely, my wife questioned my thinking: “Excuse me? You declined??? What’s wrong with you? “So, you would rather eat genetically mutated turkey bits and plastic peas than join our friends for the real thing? Call him back and tell him YES, you idiot.” Technically, she didn’t actually say “you idiot.” But I’m fairly certain she was thinking it.

The plan was to enjoy the special Thanksgiving Day All-You-Can-Eat buffet at the Tulalip Casino. The restaurant did not take reservations. First come, first served. We arrived at what we thought was a reasonable hour: 1:00 p.m. I gave my keys to the valet and we headed inside the casino. I was surprised to see hundreds of people playing the slot machines. Maybe I’m just old-fashioned, but nothing says Thanksgiving like playing the Beyoncé-dollar slots.

I watched dumbfounded as this sea of humanity chose to spend their Thanksgiving sitting in front of slot machines, apparently in search of the fastest possible way to burn through their paychecks. We eventually found the line for the buffet. I should clarify: we found the END of the line. Technically, we couldn’t actually see where it began because it meandered around not one but two corners and kept going to the vanishing point. It was easily 1,000 feet long, two to three people abreast.

The four of us took our place and waited for what felt like an hour, but upon checking my watch, was closer to six minutes. (I’m not good at estimating time.) In that interval, we’d advanced perhaps ten inches. On the plus side, at this rate we’d almost certainly make it to the food in time for their Christmas Day buffet.

I approached a security guard. “Excuse me…. Brad.”  (I saw that his name tag said Brad, and I always like to address people by their name). “It’s Craig,” he replied dryly, as if to question why I would call him by any other name.  “Okay… Craig. Would you have a rough idea of how long the wait is from here to the buffet?” The guy not named Brad replied curtly, “At least two hours. Might be closer to three. Hope you’re not hungry.” 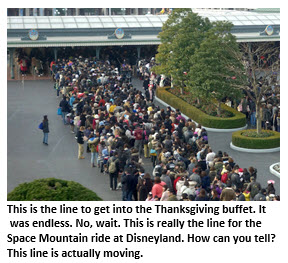 Not-Brad’s hilarious wit notwithstanding, I had two immediate reactions: First, there was no way on earth I was going to stand in this line for two hours for ANY meal. I didn’t care if Justin Timberlake was carving the turkey and Barbra Streisand was singing The Way We Were by the salad bar. Second, how is it that the 700+ people in front of us seemed perfectly content to wait hours on end, just for turkey? Who are the real turkeys here, I pondered. I could only conclude that they all must know something I didn’t – like they each were going to win a Caribbean vacation.

We piled back into our car and began searching for another restaurant. Here’s a handy piece of advice the next time it’s Thanksgiving and you decide to dine out without making reservations: Get there no later than 7:15 a.m., or else GIVE UP! For the next hour, we drove around, we called around, we Googled around, but not a single restaurant was open. Technically, I just lied. Actually, McDonald’s was open. So was Starbucks. And, if you ask me, nothing says Thanksgiving like a bagel and double tall latte at Starbucks.

Perhaps I am an elitist, but I yearned for a place with a tad more ambiance than Dairy Queen. We eventually tried the grocery store, which to my surprise was still open. Looks like we’d make a Thanksgiving dinner at our house after all. Just one problem. When we got to the grocery store, the hot deli section was already closed. So much for turkey and potatoes. After more than an hour of searching for a restaurant that did not feature a children’s ball pit, we decided that perhaps this get-together was just not meant to be. We dropped our friends off at their house and I wondered if it was too late to retrieve my turkey pot pies from the garbage.

As we headed home, we passed by one of the few restaurants on our small, semi-rural island. Out of the corner of my eye I spotted a neon sign in the window that beamed OPEN. Seriously? I slammed on the brakes and did a hard U-turn. As I pulled into the parking lot, I was sure someone must have forgotten to turn off the sign – because there was only one car in the parking lot. I tugged on the door. To my amazement, it opened. There was one other couple in the place.

“Um, are you guys actually open?” I asked in disbelief? “Absolutely. But due to the holiday, we’re only serving turkey or ham for the main course.” I jokingly protested, “What, no fried octopus?” I don’t think she understood my humor. 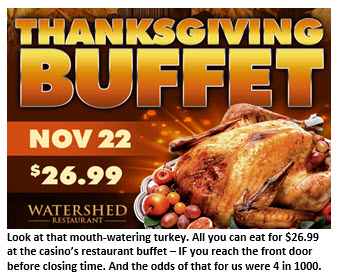 Michele and I sat down and perused the menu for the side dishes. We were only five minutes from Dave and Susan’s house. I figured I should call them. “Dave, you’re not going to believe this. Michele and I are sitting in a restaurant that is serving a real Thanksgiving dinner and there’s no line! You two want to join us?” He was sure I was kidding. But five minutes later they arrived. And soon we were all savoring hot, juicy turkey, creamy mashed potatoes and rolls slathered in butter.

For the next 90 minutes, we had a marvelous Thanksgiving dinner in a restaurant almost completely to ourselves. It felt like our own private banquet. The turkey, gravy, and potatoes were delicious. And not a Beyoncé slot machine in sight.

We could not have planned a more wonderful, memorable Thanksgiving with delightful friends. I guess, sometimes, the best plans are the ones that veer way off course.