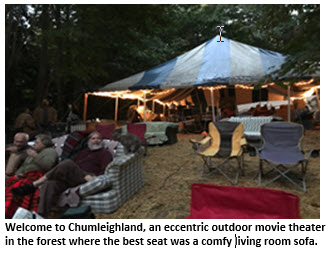 We parked by a massive oak tree, as there was no parking lot. Dutifully, we followed the torch-lit path, which meandered beside a miniature train track, like what you’d see at a children’s petting zoo. “Oh, the train should be running again by next week. I just have to clear some felled trees,” explained our ebullient host. Somehow that almost made sense to me.

The torches guided us to a large circus tent where we saw two very old-fashioned movie projectors with several film reels strewn about haphazardly. That’s when we met the first of at least 20 cats that called this forest their home. I purchased popcorn and Raisinets from a makeshift concession stand.

Seating at this outdoor theater consisted of a few camping chairs scattered in a clearing, along with two large cushioned recliners and a sofa complete with pillows. We were the first patrons to arrive. A part of me wondered, would we be his only guests that night? Could we find our way back to the old oak tree and our car? Would we be held captive here? I shivered. But before long, the crowd had mushroomed to 14 – most of them apparently regulars. Admission was by donation only. 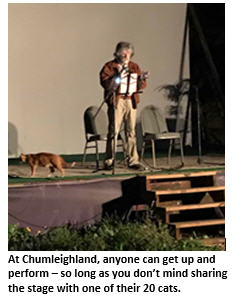 As the last rays of daylight receded, the “not really Reverend Chumleigh” took to the stage and proceeded to share his life story. He began as a Vaudeville performer “from the Jurassic period” (exact quote) who now invites people into his woodland home to watch old movies, recite poetry, sing songs or whatever floats your boat. “I also do weddings and funerals,” he added. Of course, you do, I thought.

Still confused? How about I let his website explain his enterprise:

Visit Chumleigh’s Central Casting and Chumleighland in the Woods – Vaudeville, Variety, Music and other Esoteric Arts! A Ten Acre Campout Venue–All the Ambiance of a Third World Vacation WITHOUT the Cholera or Parasites!

The Reverend Chumleigh announced it was Open Mike time. He invited anyone to come up on stage to sing, dance, perform magic, or even juggle cats (the record is seven, I was told). One person did a thoughtful ten-minute recitation that might have been a tribute to President Obama, or maybe it was about the Vietnam War. Or perhaps about how to bake banana bread. I had trouble following because I got distracted watching the antics of one of the cats, who decided this was the perfect occasion to swat invisible bugs and chase them all over the stage.

Next was a youngster draped in flags who played guitar and sang an obscure folk song. I had a flashback to those San Francisco hipster night clubs from the 1960s. I was half expecting Lenny Bruce to appear.

The peculiar proprietor then regaled us with recordings of his favorite unusual musical numbers. I must say, before that evening, I had never heard the song Time Warp from the Rocky Horror Picture Show performed by Alvin and the Chipmunks.

Finally, it was movie time. The first short was a music video circa 1932, called Pio Pio, featuring a Mexican songstress serenading a bird. I had no idea they had music videos as far back as the thirties.

This was followed by a vintage 1930 Laurel and Hardy film called Hog Wild – which I had actually seen when I was ten! No movie-going experience from my childhood was complete without a cartoon. I was not disappointed, as next up was an obscure 1936 animated short called Skunked Again, featuring two very determined skunks, a shape-shifting dirigible, a kangaroo, and several mischievous penguins. Very eclectic collection so far. And all of these were presented on authentic film reels. Nothing digital about this evening.

The finale of this cinematic throwback experience was the classic 1931 Marx Brothers hit, Monkey Business. It had no discernible plot and made absolutely no sense. The acting was atrocious. None of that mattered because it featured the Marx Brothers creating havoc and driving annoying rich people on a cruise ship crazy. What more can you ask for from a movie?

For roughly three hours, my wife and I were carried back to a different world – a simpler, more innocent time. This year’s Chumleighland picture show season ended in September. But the cheerful reverend promised to re-open his woodland cinema next summer for the 17th time.

I know I’ll be back. Next time I might even read one of my VFTB posts during Open Mike time. This seems like just the right venue for my kind of oddball humor.