A Sign I Have Too Much Time on My Hands 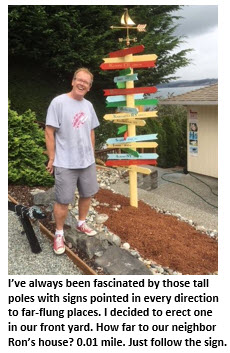 Do you know the distance from my house to the South Pole? Of course, you don’t. But I do. That’s because I recently erected a giant sign pole complete with weather vane in my front yard that displays the direction and distance to several far-flung places, including the South Pole. How far is it from our house here on Camano Island, Washington to say, Cape Town, South Africa? Glad you asked: 10,199 miles southeast. Distance to Pitcairn Island? 5,022 miles almost due south. Moscow, Russia? I have no idea. But I can see Russia from my back door, so no matter.

For years, I’ve been fascinated by those rustic towering poles with signs pointing to remote locales like Timbuktu (yes, that’s an actual place). Maybe it’s the wanderlust in me or my long-held interest in maps. Or perhaps I’ve read too many National Geographic articles about the lost tribes of Borneo. Whatever the reason, I decided to plant one of these (poles, not Borneans) in our yard as a fun conversation piece. Prior to this project, the only thing quirky about our house was my wife’s husband.

I asked my wife if she’d be okay if I built one of these and gave it a prominent location on our front yard. To my amazement, she did not protest in the slightest. Even when she woke from her nap, and I asked her again, she was still moderately amenable. She had just two conditions: first, I had to promise to not do a sloppy job. Second, I could not try to conscript her assistance with this fool’s errand. Deal, I said, knowing all too well there was no way I would live up to the second condition.

You know that expression, “it takes a village?” Well, I could never have completed this project without the expertise of several kind (some might say ‘gullible’) friends who offered to pitch in. I like to think they offered to help because they like me. It’s entirely possible, in retrospect, that they simply felt a moral obligation to intervene for my protection (and their property values) in a project that had tremendous potential to veer wildly off course.

The first step was to round up the materials. I called my friend Jim and promised not to release the incriminating photos of him from last year’s New Year’s Eve party if he would pitch in with this part. Also, he had a truck, something I consider extremely important when choosing my friends. 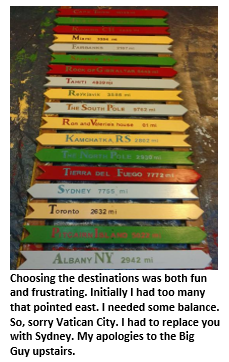 Jim took the lead in selecting the perfect pole – 12 feet tall and 8 inches wide. He showed me how to calculate the amount of lumber needed, and how to cut it into the signs, including the arrow and chevron details. Most importantly, he showed me how not to amputate my fingers while using his circular saw.

Next came the arduous tasks of digging a twelve-inch wide, two-feet deep hole for the post, hauling the 120-pound post from Jim’s truck to the hole, mixing cement, pouring it into the foundation, and finally nailing two cross beams to support the post while the cement hardened. I did everything except for every task listed in the previous sentence, which Jim handled. But in my defense, I told Jim he did an outstanding job, so I feel I demonstrated exceptional hiring, delegating and coaching skills at this stage of the project.

Then came the all-important selection of the 20 destinations. I chose some based on their personal significance, like Miami, where I met my wife, and the two cities in China where our daughters were born. Some I chose because they just sounded exotic or remote, like Machu Picchu and Pitcairn Island (in the middle of nowhere in the South Pacific). I calculated the distance to each destination to within a mile, using a painstaking method I devised – Googling, “how far is it from here to [name of destination]?”

Next was painting the letters. I have roughly the same artistic ability as a proboscis monkey, so I knew this part was going to be a stretch. But then I found two resources that made this stage much, much easier: first, a set of broad-point gel pens (steadier in the hand than paint brushes); and second, my friend Pam, who took pity on me and assisted with the lettering.

Finally, the day arrived to attach the signs to the pole. Once again, I turned to my buddy and carpenter extraordinaire, Jim. We took great pains to ensure every sign was pointed in the correct direction. When I tried to nail the sign for the South Pole straight down into the ground, Jim deftly pried the electric screwdriver from my hands, and took charge. Sometimes, extreme incompetence is its own reward. 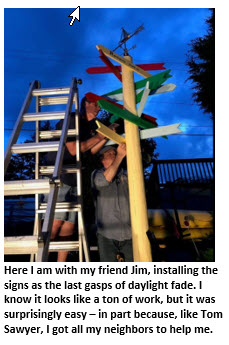 We worked well into the darkness, as Jim drilled holes, inserted screws, and checked that each sign was level. Yes, it was hard work, but Jim never could have done it had it not been for me holding the flashlight ever so steady, while he toiled under the moonless sky.

In the end, it all came together far more perfectly than I could have hoped. It looked so nice that my wife didn’t even demand that I take it down – immediately. Passersby have generally offered two observations. Either they make some snide comment about my having way too much time on my hands. Or they inquire, “Hey, how about you add a sign pointing to my place?” Um, sure. I’ll get right on that.

I’m deeply grateful to all my wonderful friends (LeRoy, Laurette, Pam and especially Jim) without whose help this project would have gone south and resulted in massive medical bills. To those cynics who questioned the wisdom of erecting this 12-foot-tall installation in my front yard, I will have you know that I am reasonably sure I have reduced the resale value of our property by less than $40,000.