You Can Take a Hike 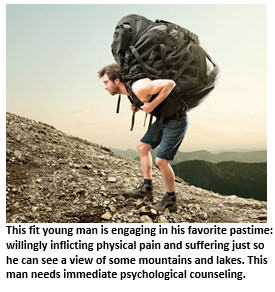 Lately, whenever someone invites me to go hiking, my response is usually: “You can take a hike.” That’s because, I really don’t care for hiking.

Don’t get me wrong. I’m not lazy. Okay, maybe that’s a lie. But I used to take long walking excursions all the time. It’s one of my wife’s favorite leisure activities – so much so that she snuck it into our wedding vows: “I promise to love, honor and cherish you – and take annoyingly long, arduous hikes into mosquito-infested woods in the middle of nowhere – so long as we both shall live.” I probably should have read over our vows a bit more carefully, but young love makes you say yes to the craziest things.

I’ve endured tons of treks over my lifetime. I’ve scaled summits of the Rocky Mountains (well, the summit of the visitors’ information stations, at least). I’ve toured all over Europe for two months, with nothing more than a backpack and my sister (to carry my backpack). I’ve run several 10K races and even completed a marathon – that’s 26 miles – and at the end, all I got was a t-shirt. So, don’t tell me I’ve not put in my share of hard miles on foot.

But hiking is not that much fun for me anymore, in part because I have osteoarthritis in both knees – which, personally, I blame on my wife, for making me join her on so many walkabouts over the past 35 years.

I don’t get the appeal of the activity. Hear me out. You want me to walk for hours, usually in the middle of a forest, so the view is totally obscured by trees and boulders and nature. Then, to make matters worse, after reaching my destination five miles later, there’s never a Starbucks. I’m stuck in no man’s land with no cell phone reception, so I have no idea what the game score is. I’m utterly exhausted and my knees are throbbing. But wait! We’re not done with the fun yet. My ordeal is only half over, because to get back to civilization, I have to cover the exact same route in reverse. I guess if you’re a masochist, I totally get the appeal.

Even my wife sometimes concludes that jaunts into the woods can be become a little repetitive. That’s why she likes to add a little challenge by choosing trails with altitude gains of say, 2,500 feet. “Trust me,” she promises. “When you get to the summit, it’s breathtaking.” Well, she’s right about that part. By the time we reach the peak, I’m totally out of breath. And she’s usually right about the view, too. Truly stunning – if you don’t mind staring into a cloud bank with an unobstructed view of fog in every direction. 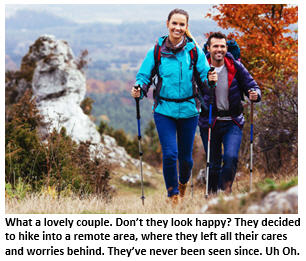 I actually would not mind scaling mountains and foraging through forests if they could just figure a way to do it without all that walking. If you want to explore the Grand Canyon in a golf cart, then I’m totally in. Call me.

The other annoying thing about this pastime is that it’s often accompanied by another terrible idea – camping. As if walking for miles at a stretch with no couch to rest on wasn’t bad enough! Add to it sleeping on rocks in a cocoon with bugs assaulting you all night, and not even an outhouse but a bush which I invariably must scramble to in total darkness at 3:00 a.m. What part of this spells fun?

Let me ask you a question: When was the last time you heard about hikers on the news? It’s never good. The report usually goes like this: “Two hikers have been missing since Saturday. They were last seen taking photos of a momma grizzly and her three cubs. Details at eleven.”

I realize that it’s politically incorrect to whine about hiking. After all, I live in the Pacific Northwest, America’s mecca for wilderness treks, with not one but two major mountain ranges: the Olympics and the Cascades. Hiking is practically a religion here. People in Seattle wear their hiking gear all the time, because they never know when a buddy will show up out of nowhere and invite them to hit the Pacific Crest Trail. Even when they’re just going to grab a latte, they’re donning their Patagonia garb: a long-sleeve flannel shirt, parka vest and wool hat (in August). Very chic. 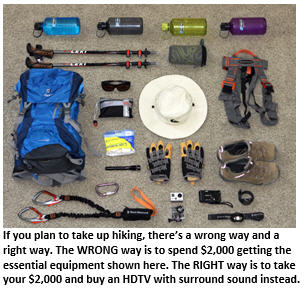 I still own all the required gear: cramped boots, bug spray, pepper spray (for the cougars I’ll invariably meet), my 1974 Mets World Series Champions cap, a rusty Army surplus canteen that can hold up to 64 ounces of diet Pepsi, and a three-year supply of GORP my wife bought at Costco in 2005. I am prepared.

So, don’t summon me to your next six-hour pilgrimage into Lost Hombre National Park unless you plan to buy me a steak dinner afterwards.

Hardcore backpacking enthusiasts love to point out that it’s not about the destination; It’s about the journey. Let me politely say, those people are idiots. If I’m going to haul a 20-pound pack over six miles of crags and stumps up 3,000-feet, there had better be a rainbow-colored waterfall or an erupting volcano at the end of the trail – or a 7-Eleven. I’d settle for that.

As much as it is no longer my thing, I’m sure I’ll accompany my wife on many more explores in the years to come. Because I love my wife, and I know this gives her great happiness. And because when we get back to civilization, I’ll get to watch the Mariners in my massaging recliner, chugging a Mountain Dew on the rocks. My kind of rocks.