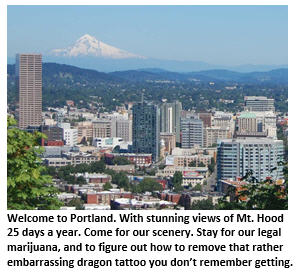 [The following is a message from the Portland, Oregon Visitors’ Bureau.]

If you’re planning to spend a few days in the Rose City, we at the Portland Visitor’s Bureau would like to offer a few friendly suggestions to help make your stay as pleasant as possible.

First, we might as well get this one right out of the way. In Portland, we’re slightly left of center in our politics. If you’re a lifelong Republican or you accidentally voted for Donald Trump, no need to apologize. But, you might want to rethink your travel plans. We hear Tulsa is a place you might enjoy, with its expansive plains and oil rig fields.

But if you’re someone who thinks Hillary should have been our 45th president, or better still, Bernie, or even better yet, Spider-Man, then you’ll feel right at home here. Our city’s motto is KEEP PORTLAND WEIRD. In case you thought that was Austin, Texas’ motto, you’re right. We don’t mind sharing.

One of our more iconic residents is The Unipiper. He can be seen pedaling around town on his unicycle, donning a Darth Vader helmet while playing the Star Wars theme on his bag pipes, as they shoot flames. In most cities, such a sight might be a bit unnerving. Here in Portland, we just wave and say, “Hi, Brian.”

We’re extremely laid back about most things – that’s because at any given time, roughly half of us are stoned. We don’t mind if you’re a couple hours late to work, so long as you remember to buy a latte for a co-worker when you stop at Stumptown Coffee on your way in. 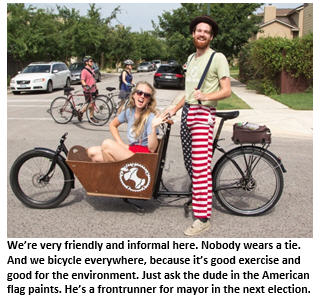 And we do things slightly differently from other cities. For example, the locals aren’t fond of driving cars here. Bad for the environment. We rely heavily on public transportation in the form of electric trams. But watch out for all our bicyclists. They’re everywhere. Police officers are easy to spot. They’re the ones on the skateboards with the sirens.

When you come to an intersection, just a reminder that in our town, pedestrians always have the right of way. If they decide to walk against the light and suddenly start an impromptu game of Slip ‘n Slide in the crosswalk, drivers know not to honk their horns in protest. It’s just not done here. So, relax. What’s your hurry anyway? You’re in Portland. Arriving at your destination on time is considered a little rude in these parts.

One thing we do take seriously, however, is saving the planet. We don’t care if you choose to poison your body gulping down sugary soft drinks. But we better not spot you drinking that Pepsi with a straw. And don’t make the mistake that some out-of-towners do of carrying their groceries in plastic bags. The skateboard cops will confiscate your Nirvana records for a first offense. Please remember always to request a paper bag. Better still, save a tree and make your own recyclable shopping bag using your hair clippings woven together into a basket.

Also, we just won’t abide by littering. Remember to put your recycling in the correctly labeled bin. It’s easy to remember, as our bins are color-coded for your convenience:

You may notice that there are many young people in our city. That’s because Portland is widely regarded as the #1 city in America for under-30s to retire to. For the remaining workforce, very few hold white-collar jobs, since wearing ties is against our religion – unless you mean tie dyes, in which case, you’ll fit right in.

The most common careers for our under-35 population – and over 35, for that matter – are bartender, barista, guitarist, yoga instructor, and clown. Folks here simply don’t rise and shine before 2:00pm, unless they have a kundalini yoga class that starts at the ungodly early hour of noon.

If you plan to visit for several days and you don’t already have a tattoo, we strongly recommend getting inked while you’re here, so you don’t feel out of place. While most Portlanders’ bodies are heavily covered with tatts, don’t feel pressured to go that far. A tasteful arms-length design of flowers, eagles, or a minor space alien from Men in Black will suffice. 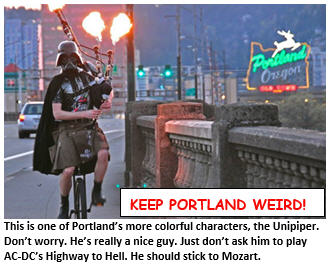 Did we mention that we don’t eat a lot of red meat? We sort of put red meat in the same category as voting Republican – we understand that some misguided souls do it; we just find it too upsetting to talk about. Most locals abide by a strict diet of organic vegetables and artisan-grain-fed free-range chickens – unless they’re a Fruitarian, in which case they only eat fruit that decided to fall from the tree of its own volition. To yank it from its branch would just be cruel.

In our city, we still love grunge music, dreadlocks (especially if you’re white), pink beards, Latin jazz vinyl records, and unusual body piercings. We’re slightly subversive – but in a harmless sort of way. We refuse to wear a suit, unless we’re being ironic.

Yes, Portland is a bit quirky. And, no, we’re really not fond of people comparing our city to a mini-Seattle. They make Starbucks coffee by the ton every hour in Seattle. Down here, we produce Breakside India Pale Ale, the best microbrew in the USA – unless you consider any of the other 57 outstanding microbreweries in our community.

So, if you’re looking for a more laid-back vibe and you don’t mind a few rain clouds from September to June, check out Portland, also known as the City of Roses, Bridge City and Beervana. But be careful. You might not want to leave. You just may decide to retire here and get a part-time job as a barista at Powell’s book store – so long as it doesn’t conflict with your 3pm weaving class..