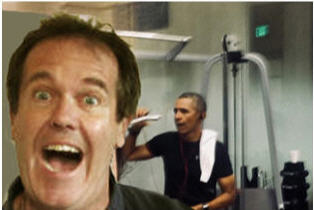 Mr. President, I miss you so much!!! [after which I would commence sobbing] … Or

Mr. President, can I get a selfie of you and me, with you holding my book, I am So Sick of White Guys? … Or

Mr. President, if I give you a hug, will your two pals in the corner take me down and beat the crap out of me? … Or

Mr. President, are you sure the Constitution forbids you from removing our current president from office on the grounds that he’s an insufferable narcissistic idiot, thereby resuming your rightful place as our Commander in Chief? Could you at least have a staffer check into that?

In the end, I got completely tongue-tied. All I could think to utter as he walked near me was “Sir, thank you for your service,” – to which Obama smiled and said, “Thank you.” That’s right. Obama thanked ME – presumably for my contribution to great literature and for polarizing the nation even more via my political satire book (see shameless book promotion above).

Everything I’ve written thus far happened exactly as I’ve described. But it’s what happened next that you may find a trifle implausible. 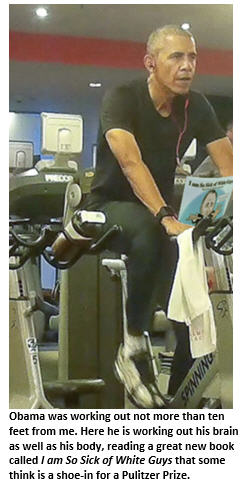 Right after he said thank you, I suddenly found an inner confidence. I approached Obama, shook hands and said, “Mr. President, may I ask a question? How is it you remain in such remarkably good shape after eight grueling years as president?”

Obama pulled me aside, put his arm around me, and warmly responded, “That’s a great question.” Then he asked my name.

In shock that he would actually ask that, I stumbled, “um, Tim. Tim Jones.”

I’ll never forget what he said next. “You’re not, by any chance, the Tim Jones fellow who wrote that book, I am So Sick of White Guys? I gave that book five stars on Amazon.”

OMG! He WAS thanking me earlier for my literary genius! “Um, why, yes, sir. Yes, I am. How did you know about my book?” I asked incredulously.

“Hey,” he shouted to his security detail. “This is the author of that book I was telling you about!” Then he looked back at me and said, “I heard about it from Joe Biden. He loved the blog article you wrote about him, by the way.”

“The one called Joe Biden Facing Claims of Decent Behavior?” I asked in utter amazement.

“Yeah, that’s the one. Nice job. Oh, and call me ‘Barry.’ So, you want to know how I stay fit?”, he said, remembering my initial question.

“If you have the time, sir. But you probably have somewhere you need to be,” I rambled, my head still in shock.

“Well, if you have time, Tim, I’d be happy to show you,” Obama enthusiastically replied.

He spent the next 30 minutes walking me through his fitness regimen, watching me try the moves and giving me helpful coaching advice about breathing, stretching, and strengthening my core. Then Barry and I grabbed lattes at a local café, which is amazing because until then, I never particularly liked lattes.

Next, we went rollerblading on San Diego’s Mission Beach boardwalk. Then we made sand castles and watched the waves carry them away. “It’s a metaphor for life, Timbo. It’s all fleeting,” Barry mused. I wanted to sit at his feet and soak up all his wisdom. Instead, he wanted to soak up some more rays as we trotted along flying our new matching kites he bought us.

Eventually, Anthony and Marko (his secret service agents – but don’t reveal their names to anyone – that could get me in big trouble) reminded Barry he needed to get to the airport. He was due in Brussels to give a lecture at the European Union.

“Hey, wanna come along? It’ll be fun!” exclaimed my new bestie. Reluctantly, I had to decline. “I have to work a trade show booth this afternoon. Maybe next time, okay, Barr?” It killed me to decline his generous offer, especially because he said the Baked Alaska they serve for dessert on the plane is to die for.

As we parted, we hugged and did our secret handshake we came up with earlier while playing video games at the arcade, and before I knew it, Barry and his limo were gone.

And yet, I suspect some of you won’t believe this all really happened. But I swear it did – well, some of it, anyway.