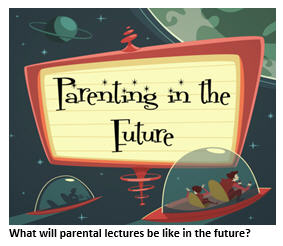 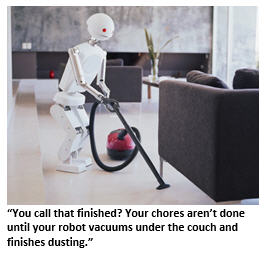 Back then, technology was so primitive. Our family TV was a flat screen Hi-Def 1080 pixel! I’m not making this up. And no 3D, let alone the 5D that’s commonplace today. You could only watch one program at a time, with barely 300 channels to choose from. So, be grateful – I never got to watch any show, anywhere, anytime, like you do with your Holographic Virtual Reality Headsets.

When I was young, a storm could cause a “power outage” which could knock out this thing we called “the Internet” for a whole two hours. Sometimes I think back and wonder how I ever made it through those dark hours.

For music, I had to download songs – one at a time – onto something called an iPod. Too hard to explain what that was, but it was so bulky – almost the size of a remote control. Oh, right, you probably have no idea what that means either. My point is, it was a far cry from nowadays, where you can play any song ever written just by thinking to yourself, “Sirilexa, play that song I can’t remember the name of that I heard somewhere last week.”

I also had to feed our cats and scoop their stinky litter box EVERY DAY! Thanks to the invention of robopets, your kitty-bot, ByteMe, never has to be fed or scooped. Just re-charged. You have it made.

I know you may not believe me, but from September through June, five days a week, I had to walk to school AND BACK – over 800 yards each way! I had to sit from 7:30 a.m. until 3p.m. with 30 other kids in a skanky classroom decorated with posters (Google poster. What’s Google, you ask? Just Google it). So, don’t gripe about having to wake up at 11 and lounging in bed for your three hours of telepathically infused education units. You even get bonus points if you stay awake. Must be nice. 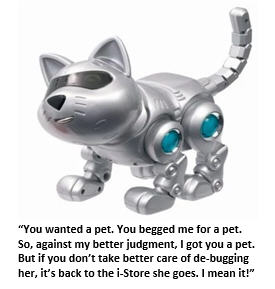 Even your schoolwork is a piece of cake compared to what mine was. Can you imagine figuring out multiplication problems all on your own – using nothing but a calculator? It was brutal! I sure didn’t have the luxury of being able to delegate my homework like you can, to an AIPA [Artificial Intelligence Personal Assistant] Marius 2100LX. And would you please, for the love of God, stop droning on about spending soooo much time uploading his monthly security updates? That’s your responsibility. Don’t ask ByteMe to do it for you.

Oh, and don’t get me started about increasing your weekly bitcoins allowance. My parents wrote me a check. We had to drive 2 miles to a bank to cash it. Such a hassle. And if you want a cyber-facial or a teleporter to visit your friend Andromeda in Malta, you’ll just have to save up. Yes, I know “saving” is a fineable offence in some states, but that’s how we do things in this family.

One last thing: your personal pod is a mess and you haven’t done your chores. You have until dinnertime or I’ll be introducing you to a quaint concept your grandpa taught me called being Grounded for Life.