[Author’s note: Every day seems to bring a new stunning Trump scandal or controversy, so much so that the mainstream media simply can’t keep up. So, as a public service, VFTB has issued this generic news story the media can use at any time, when they don’t have time to cover the latest outrageous thing that comes out of the president’s mouth. – TEJ] 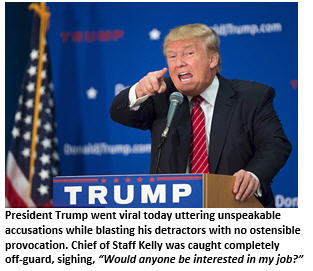 BREAKING NEWS. President Trump stunned the nation this afternoon when he said something shocking and deeply disturbing. According to an anonymous insider, he did not tell anyone in advance that he was going to say it.

He apparently decided to go off script [choose one of the following:] at a meeting with Fortune 500 business executives / before a rally of his supporters / talking with fellow golfers at one of his resorts. He spoke extemporaneously – something that has created problems throughout his presidency.

Members of the mainstream media were aghast by the president’s highly controversial pronouncements. Some political pundits called his remarks “unhinged” and “a new low even for this presidency.”

Asked about the president’s disquieting utterances, House Speaker Ryan declined to give an opinion, saying, “I didn’t see his speech, so, I really can’t comment – unless Mitch McConnell and Lindsey Graham approved of what he had to say. Then, yes, I stand by my President.”

No one really knows why the president decided to say something so deeply divisive and seemingly ill-conceived. Press Secretary Sarah Huckabee Sanders initially denied that the president said anything inappropriate. Later, upon being shown the video, she questioned the sound quality. “I really can’t make out what he said due to the loud background music. Is that AC-DC’s Thunderstruck playing? I love that song.”

The president later doubled down, tweeting that he meant what he said and that anyone who disagreed with his observation is part of the fake news’ witch hunt against him. When shown the president’s tweet, Huckabee Sanders backpedaled, replying, “I’m quite certain he was joking. The president is known for his hilarious sense of humor.”

The President subsequently dispatched a memo declaring “I’m not joking.” Huckabee Sanders, asked if she still thought he was just clowning around, shrugged and said, “I feel a migraine coming on. I think I better lie down.”

Vice President Pence deflected, explaining, “I did not hear the President’s remarks. I was having a private conversation with Jesus while working on my upcoming inaugural address. I know nothing about the Stormy Daniels allegations either. Never met her.”

Within an hour of the president’s stupefying rant, European leaders unanimously condemned his speech. German Chancellor Merkel called his words “deeply regretful”. British Prime Minister May hinted that she might pull her ambassador in retaliation for the president’s unabashedly repugnant rhetoric. French President Macron went even further, denouncing Trump’s butchering of the English language.

The president’s off-the-cuff declaration immediately became fodder for late night talk show hosts, who mocked him for being ignorant, racist, and probably wishing he was still back on Celebrity Apprentice.

Several CEOs, including the Koch brothers, issued official statements expressing outrage that any president could utter something so distasteful and hurtful to so many, with some even calling for the president to be impeached – or better yet, exported to some “s***hole” African nation. The president’s reprehensible words have even caused a reaction on Wall Street, with the Dow dropping 500 points within an hour of his inexplicable, bizarre diatribe.

Members of the president’s senior staff were unavailable for comment, many of them locked in their offices drinking heavily, hoping to blot out the memory of their boss’ latest blunder. One White House intern wishing to remain anonymous bemoaned, “Every night I pray that I when I wake I will find that this excruciating job with Trump was just a terrible dream.”

Russian President Putin issued a terse release stating he found nothing wrong with the remarks, reiterating that President Trump continues to have the Kremlin’s full backing and support.

Later that afternoon, the president headed off to Mar-a-Lago, to spend his fifth weekend in a row golfing and attending a meeting with his twenty ten five remaining administration staffers, followed by dining alone on arguably the world’s best chocolate cake.

Most historians could not immediately recall the last time a sitting American president had issued such offensive, heinous and deeply disturbing remarks for no apparent reason other than to create a media frenzy. Then they remembered the previous day’s equally shameful and appalling press briefing.