[Author’s Note: America’s gun violence epidemic is no laughing matter. What happened in Parkland, Florida recently, resulting in the deaths of 17 students, teachers and coaches was horrifying. This post is my attempt to point out the lunacy of the lame response by Congress, most state legislatures and our president to the issue, because they are all too afraid to stand up and take on the NRA. – TEJ] 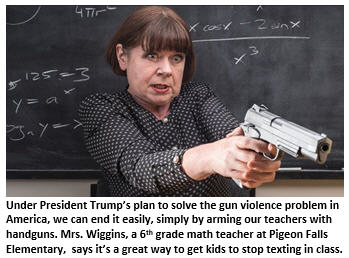 Let’s be clear: I did not vote for you. But I have to admit – you’re doing an amazing job at Making America Safe Again.

I must say, whatever triggered your latest inspiration – to curb school shootings by arming teachers – is every bit as well-thought-out and necessary as your Mexican border wall idea – and nobody is more of a stable genius than you, Mr. President.

In your courageous tweet you advocated providing guns to 20 to 40% of the teachers in each school. According to the Department of Education, there are approximately 3.6 million teachers in schools across the nation. Now, I’m no math genius like you, Mr. President, but assuming 30% of the teachers are armed, that works out to roughly 1.1 million more guns in our schools. Great plan, sir.

Oh, sure, these teachers will need to spend a lot of time in training. But isn’t that a far more important use of their time than teaching students? After all, most of those kids aren’t paying attention in class anyway.

And it will no doubt cost a pretty penny to buy all these guns and train all these teachers on the proper use of firearms. But if I know you, you’ll probably just take the money out of the Medicaid budget. I’m sure you’ve figured that all out.

Trust me, President Trump. Your idea is bullet-proof. Don’t pay any attention to the fact that every major police department, every public school superintendent and virtually every single teacher in America thinks your plan is reckless, fiscally irresponsible, and an unreasonable responsibility to place on teachers. Who would know more about protecting our youngest citizens – police chiefs or the greatest president in our history (if you don’t count the 44 who preceded you)?

Some critics will point out that the high school in Florida had three fully trained, armed sheriff’s deputies on site, who nonetheless chose not to intervene to stop the carnage. But I’m confident that the 62-year-old band teacher, Arthur Hawkins, will bravely wield his pistol to defend his students against a psycho killer spraying 200 rounds per minute.

Others worry that an upset student, blaming his teacher for the D on his paper, may overpower her, take her gun and hold her hostage until she changes his grade to an A. But have no fear. Chemistry teacher Bud Perkins in the classroom down the hall is only minutes from storming in, to take down the unruly student and teach those disrespectful kids a lesson they’ll never forget – at least the survivors, anyway.

There may be a few (hundred million) negative nellies who will call your idea idiotic, dangerous and impractical. But these America haters are just wrong. Technically, it’s true that a handful of nations like Australia, Canada, France, Great Britain and any country (other than the USA) with a vowel in its name have reduced their nation’s mass murder rate dramatically, simply by banning assault rifles and making it much harder to purchase handguns.

But your detractors are all just a bunch of unpatriotic “let the government solve it” socialists. And one thing America will NEVER tolerate is socialism (with the limited exception of our public school system, state universities, armed forces, local police, local fire departments, Medicaid, Medicare, Social Security, the Post Office, and about 200 other institutions too minor to mention).

Backwards countries like Norway and Germany don’t have our glorious Second Amendment, which consecrates every citizen’s (except blacks’) God-given right to possess an arsenal of handguns, assault rifles, flame throwers, bazookas and surface to air missiles, just like our founding fathers intended. These are the very men who embraced slavery, bloodletting, and lead paint – and we all know that lead paint is the victim of a conspiracy theory. 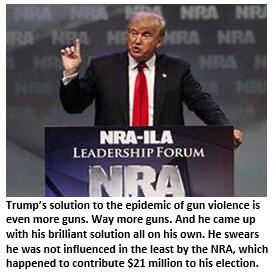 Of course, sir, your solution – as epic as it is – only protects our schools. What about all the other venues that mass murderers prey on? The softer targets, such as movie theaters (Aurora, CO), hotels (Las Vegas), night clubs (Orlando) and shopping malls (Burlington, WA). We should ensure that every ticket taker, bell hop, and store cashier is locked and loaded. At Wal-Mart supplying their clerks with guns should be easy-peasy since every store already has a large selection of arms and ammo in the sporting goods section.

And what about the dangers of mass shootings in our houses of worship (Charleston, SC)? So, we really should start making plans to ensure every pastor, priest and rabbi is packing heat. My Bible knowledge is a bit sketchy, but I think there’s a passage in the New Testament about Turning the Other Cheek – to get better aim as you shower the sinner with the wrath of God – and your 44.

Finally, let’s not forget America’s dedicated office workers. How about ensuring office safety by giving Charlie over in accounting a revolver to hang on his cubicle hook. No doubt Charlie will win Employee of the Month the next time he takes out a cold-blooded killer attempting to shake down the vending machine.

Now that I think about it, trying to combat a monster armed with an AR-15 when the good guy only has a pistol is not a fair fight. That’s why, I hope you’ll agree, Mr. President, we should make sure all our teachers and preachers have the same level of firepower as their attackers. After all, as NRA spokesperson Wayne LaPierre always says, “The only thing that will stop a bad guy with an assault rifle is a good guy with an assault rifle.”

Some skeptics may argue that in the chaos of 10 office workers all unleashing their assault weapons at once, it could get confusing trying to figure out who is the actual bad guy, not to mention the remote chance (less than 80%) of taking out innocent bystanders. But these are minor logistics which I’m confident you’ll iron out because you’re a genius. Like you said at the convention, nobody can solve America’s problems better than you.

You have figured out what the teachers and cops have failed to: The problem in America is not that we have too many guns; it’s that we don’t have nearly enough of them. Our school children will thank you, Mr. President – almost as much as the gun dealers, manufacturers, and our blessed NRA.