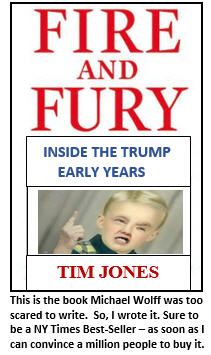 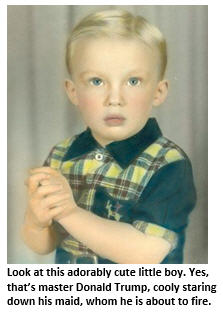 At age eight, Donald had difficulty making friends. Later in life he would overcome this affliction by amassing enough wealth simply to buy them. He conquered his childhood insecurities by becoming a master deal maker. He had half the third grade on his payroll doing his homework while he watched Captain Kangaroo, clinging to his blankie. If his minions scored him an A, he’d pay them in candy he’d “borrowed” from the neighborhood grocery store. Over time, kids started complaining he wasn’t paying them the candy they were owed. But Donald knew that these kids were all liars and had done a sloppy job on his homework, so he had a right to stiff them…

By the time he was ten, Donald’s confidence had grown exponentially.  “He was extremely competitive with the other boys,” recalled his 5th grade teacher, Lucille Patterson. “He would say things like “’My pencil is longer than your pencil’ or ‘My chalk is larger than your chalk’ or ‘My button is bigger than your button.’ I could never figure out what that was all about,” she sighed…

When Donald was eleven, he started noticing girls. Sue Ellen Moraski, his babysitter at the time, recalled one evening when he tried to grope her, and she pushed him away. “I told Donnie, ‘Stop that! Polite boys don’t touch girls without asking.’ I still remember his bizarre response: ‘Someday I’m going to be rich and famous. Then I can do anything I want with girls. And by the way – YOU’RE FIRED!’” she laughed nervously…

In middle school, his mind boggled at his superior intellect vis-à-vis his teachers. His 7th grade math teacher, Bert Connolly, recalled the day Donald flunked a quiz. “Donald’s belief in himself was exceptional. He strode up after class and argued vociferously that my answer key had to be wrong. He called it a fake key because it didn’t match the answers his classmate had given him. He insisted that 63 divided by 7 equaled 14. I politely suggested he pursue a career that did not involve numbers. He reported me to the principal. I haven’t worked in the field since.” 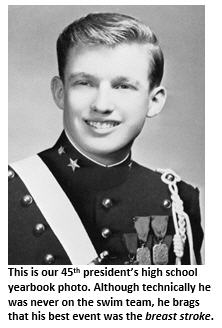 Fred and Mary felt compelled to send their son to a military boarding school. “My little boy has turned into an argumentative, verbally abusive, totally undisciplined adolescent – and his grades have tanked!” wrote Mrs. Trump in her diary. Trump has disputed these claims, deriding his parents as senile, and stating that in reality he asked to be sent to military school, so he could begin his training for his eventual job as Commander-in-Chief.

One thing Donald did have going for him was a knack for names. According to Ezra Ornstein, a classmate at the Wharton School, “He loved to come up with colorful nicknames for anybody he didn’t like. There was Ugly Amy, Dummy Danny and Tubby Tony. He called me Chewy Jewie Ezra. I gotta admit, he nailed me, as technically I am Jewish, and I do like to eat.”

Those who knew him universally described the young Donald as “a bully”, “manipulative”, “volatile”, “vindictive”, “angry” and “a moron.” And those were the people he thought were his friends. But Donald will be the first person to tell you he’s nothing like this as an adult.