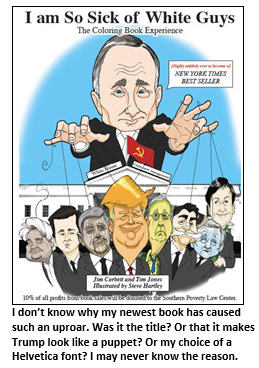 The book is called I am So Sick of White Guys, but Sven and I are both – wait for it – white guys. That’s right. Between all the sexual harassment and the self-dealing with tax reform, for starters, even white guys have gotten sick of white guys. That was the ironic concept behind the book.

Well, Bill, er, I mean Sven and I were going along fine, minding our own business, when a regional newspaper interviewed Sven about the book, which, in case I failed to mention it, is called I am So Sick of White Guys. (I read somewhere that repeated exposure is the key to getting people to buy something.) It was a breezy piece about how we collaborated on the book.

That innocuous article was picked up by a slightly larger newspaper: USA Today. Their website’s home page featured a prominent teaser to the article about our book, which, in case you forgot, is called I am So Sick of White Guys. The article was posted at 3:45 pm Eastern Time.

Within minutes, the enraged accolades came flooding in. “Stupid”, “Lame”, and “Idiot.” And those were from my friends. The comments from complete strangers were far more unhinged. But it wasn’t until 3:52 pm, a full seven minutes later, that I received my first thinly veiled death threat: “You better stop now if you know what’s good for you” (true).

Here’s just a tiny sampling of the literally hundreds of responses to the article, some of which contained nearly perfect grammar and fairly accurate spelling:

“I genrlly don’t advocat suicide, but would you kindly ride the world of your presence you moraly disgusting pig?”

“You our a offensive human being and you disgust me.”

“You are a racist assh*** and I hate your book. You are racist against whites, you f***face.”

“You’re just a whinner because you’re party lost the election. Get over it, you wimpy looser.”

My detractors didn’t limit their venting to the USA Today website. Oh, no! The angry mob quickly stormed the castle at Amazon and posted even more hostile “reviews” about me being a racist, a moron, and bad at drawing, deserving only one out of five stars. Mind you, these critics had not actually purchased the book, let alone read it. But they had seen the book’s cover in the article. And that was enough to conclude that I am a nefarious, morally bankrupt subversive, who must be stopped in order to Make America Great Again. (Note: Virtually all “verified purchasers” gave the book, which is called I am So Sick of White Guys, 5 stars). 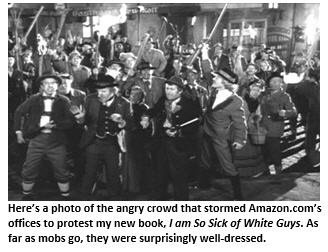 Within an hour, the USA Today piece had been picked up by several of the most high-traffic alt-right websites, including Breitbart, The Drudge Report and the Stormfront, a notorious white supremacist website, whose logo reads “White Pride Worldwide.”

Talk about making enemies in a hurry! Within three hours, I was voted one of the most vile, disgusting, loathsome creatures ever to roam the planet: a liberal.

So, I have learned my lesson. If you want to get thousands of people to hate you, just publish a book about politics. That’s why, after long and thoughtful deliberation, I’ve decided never to write about politics again. I’m doing a complete turn-around with my next book – one that’s sure to be far less controversial and shouldn’t offend anybody. It’s a how-to guide called A Husband’s Guide to Teaching Your Wife How to Drive – the perfect gift for that special someone for Valentine’s Day.