Vancouver? – Ya’ Can’t Get There from Here 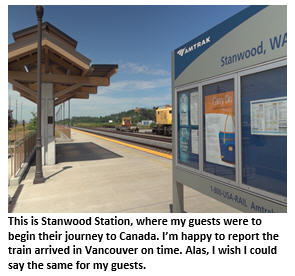 Here’s a tip you might want to jot down: When your guests from Argentina want to hit the rails to Vancouver departing from Stanwood, Washington, the closest town to my home with a train station, you might want to make reservations. I didn’t – which caused the following chain of events…

It was the end of a very nice visit with Monique and Manuel. (Not their real names. Their real names are Maria and Jose.) I had already mapped out my day: Drop them off at the station to catch the 9:15 train. Get back home by 9:30. At 9:35 commence sleeping in the hammock. A perfect plan.

Except for one small miscalculation. I failed to make train reservations for my friends. I wanted to wave “Goodbye” from my car, but decided that might be rude. So, I walked them to the platform. That’s when I heard the conductor announce, “Passengers with reservations only! All Aboard!” Reservations? It’s a ten-car train hailing from tiny Stanwood. Who needs reservations? I immediately had my own reservations – something was not right.

There is a quaint saying: “The journey is the destination.” Except for that day when the destination was everything: Vancouver, CANADA – on CANADA DAY, the nation’s Independence Day – their biggest annual holiday after National Apology Day.

No biggie. We’ll just make reservations for the next train, right? Nope. It didn’t leave for another 10 hours. What about a bus? Sorry. The sole Vancouver-bound bus left 15 minutes ago. How about a taxi or Uber? Great suggestion, Tim. Problem solved – so long as my guests were willing to shell out 400 bucks (American) for a 178-mile drive.

I researched every transportation option I could think of: ferry, rental car, crop duster, Pony Express, you name it. None of them was feasible. And I had a gut feeling that my guests were not the hitchhiking type.

Eventually it became clear – we were ALL going to Canada, in my car. Yes, I was driving Monique and Manuel to Vancouver. The first two hours were a breeze except for the awkward conversation and profuse apologies on my part. Normally, the border crossing would be no big deal – a 20-minute wait tops. But remember, today was no ordinary day. Today was CANADA DAY. Which meant that all Canadians residing in the US were on a pilgrimage to their homeland to celebrate. I wasn’t feeling the joy as my car crept towards the stone-faced border guard at a pace a disabled tortoise could outrun. 90 minutes later we finally made it through the border.

Upon arriving on Canadian soil after only three and a half hours, my guests insisted they take a train for the remaining one-hour ride to Vancouver. We were near a town called White Rock and a Google search indicated that there was a station there. We made it to within six blocks of the train station when all vehicular traffic was stopped. The entire downtown was blocked off for a street festival. What the …?! Oh yeah – it was CANADA DAY. Apparently, every resident of this town was celebrating how great it was to live in a country that does not have Donald Trump as their leader.

Technically speaking, White Rock did have a train station – and the last train out of town left (drum roll please) in 1962. For the last 55 years it has been a train station MUSEUM. We decided to skip the tour. 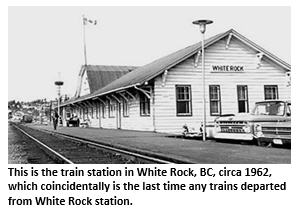 At my wits’ end, I approached a local barista and explained our dilemma. The friendly young woman told me there were plenty of buses to Vancouver. Then she began to describe the process:

“What you want to do is go six blocks north and then turn left onto Richards Avenue. Keep walking four more blocks until you reach the Rexall Pharmacy at Richards and Lake Street. Get on the C-152 bus and go nine stops, then get off at the Simpson Shopping Center. Transfer onto the C-116 bus for Surrey…”

“Um, approximately how long will it take to reach Vancouver by bus?”, I inquired.

Answer: “About three hours. Maybe longer today – because today is – …”

Scratch that idea. It was clear the only logical option was to drive them all the way to Vancouver myself. An hour and a half later, we were in sight of their hotel. Just one small problem. The surrounding neighborhood was barricaded – pedestrians only. You’ll never guess the reason? That’s right. Because today was … I just can’t say it. The entire city was sprawling with street musicians, jugglers, and thousands of revelers all possessing one shared purpose: to prevent me from ever getting home for my nap. 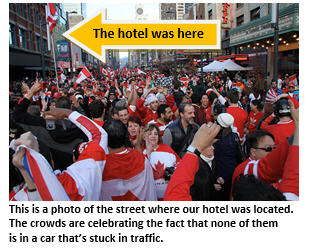 Seven hours after their train left Stanwood without them, we finally reached their hotel. I immediately headed back home. Everything went just fine – for the first 30 minutes. That’s when my car got a flat – in a small town south of Vancouver. I tried desperately to find a gas station that would fix my tire, but they were all closed today because… You’re way ahead of me.

I finally made it home around 9:30 – just twelve hours after my designated nap time.

Well, that’s my story. Right now, I’m about to take my wife out to dinner at our favorite restaurant. I forgot to make reservations. But I’m sure that won’t be a problem.