My Personal War with a Backyard Mole 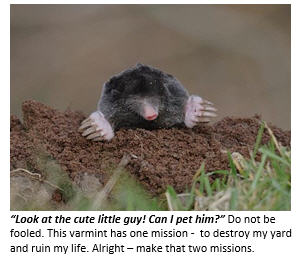 I’m not a violent man. But everyone has their breaking point. And I’ve reached mine. If you’re a homeowner, there are three certainties in life: your property taxes will go up, the roof will need to be replaced SOON, and with the first blossoms of Spring, moles will arrive in your yard.

I’ve lived in three different houses over the past 28 years. I’ve had a mole problem in every location. Not to sound paranoid, but I’m pretty sure it’s the same mole in each place. He’s following me. I’ve named him Henry – because I hate the name Henry. He probably crawls onto my covers at night just to glare at me with those nasty, vengeful pinhole eyes of his, daring me to try to defeat him.

My never-ending war with Henry started up again this spring after a wintertime truce. At first it was just a skirmish. A mound of dirt discreetly left at the corner of my backyard. Barely noticeable. I stomped it down and that was that. There were no other mounds for several days. Relieved, I concluded that Henry had moved on to my neighbors’ yard. I concluded wrong.

One week later, there were two fresh mole hills. The following week, four more. We’re now up to over 40 dirt pyramids. It’s possible Henry’s brought in reinforcements. Looks like my nemesis was going to make a mountain out of this after all.

Don’t get me wrong. I’m not taking this lying down. I get off my hammock every morning to resume my personal battle with the furry face of evil. I’ve made countless trips to ACE Hardware to stock up on defenses and ammo. First, I tried sprinkling fox urine powder around my yard. Supposedly, moles are afraid of foxes, so the urine is a humane way to coax them to move next door. Apparently, my neighbors use a more powerful concentration of fox urine powder because Henry has decided to stay here and keep on digging. I can just see the smirk on Henry’s obnoxious squinty face right now.

Next, I tried installing sonic mole spikes. They give off a high-pitched sound that drives the critters crazy. Sadly, the only mammal it drove crazy was my wife who, after two weeks of enduring the piercing sound demanded that I remove them. Score another victory for the varmint. 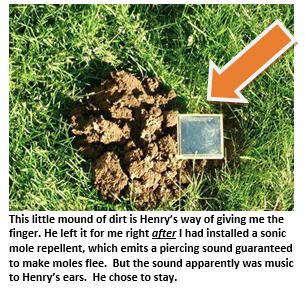 Then I bought something called Lawn Mole Castor Oil which, according to the box, “contains a scent, texture and composition that makes these unwelcome critters want to vacate your premises as fast as they can.” Except for Henry. He apparently likes to bathe in it because all it did was motivate him to create more creative mounds for my viewing pleasure.

No more Mr. Nice Guy. It was time to employ a lethal solution. I returned to ACE and before I uttered a word, Ryan, the friendly clerk, said, “Welcome back, Mr. Jones. I believe what you’re looking for is on Aisle Two, right side.” He recommended the poison peanuts. Of course, the peanuts were the only thing that disappeared from my yard. That Henry must have a stomach of steel.

Trip #8 to ACE. Ryan suggested mole worms, poisonous gummies that you shove down a fresh mole mound. Moles eat them and die. I’m happy to report the mole worm experiment was a huge success – if my goal had been to kill the one robin that visited my yard. But it was no match for Henry. You’re supposed to place these little red flags next to the murderous mole holes to keep track. After five days, my backyard looked like a practice putting green, from all the red flags strewn all over it.

In retrospect, I think the flags were the wrong color. They should have been white, because I was on the verge of surrender. Henry was clearly winning the war. But this soldier was not done yet.

Time for the heavy artillery. Back at ACE (where there was now a plaque on the wall listing me as Customer of the Month), Ryan took me to a back room. He solemnly showed me the Wire Tek 1001 Easy Set Mole Eliminator Trap. The description sounded promising: “the most effective mole control product on the market. Effective on all species of moles worldwide!” It should have come with a disclaimer: “Not to be used against moles named Henry. You’d just be pissing your money away.”

Every day I checked, and every day the traps were empty. On the positive side, I can attest to the fact that they do work on certain species. While setting up the Easy Set, one snapped closed on my finger, causing excruciating pain. Well played, Henry. Well played. 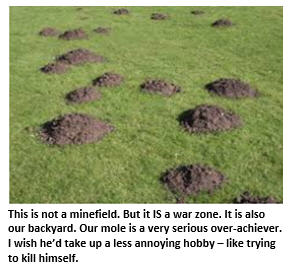 Friends have emailed several creative suggestions: “Attach a hose from your lawn mower exhaust and insert it into the mole hole.” and “The Giant Destroyer Gas Bomb is sure fire!” and “You can’t go wrong with the Underground Exterminator.” I’ve tried EVERYTHING, but so far, nothing has worked.

I briefly considered offering Henry an animal sacrifice of one of our cats, but I concluded my wife would eventually notice it was missing. I thought about bulldozing the entire backyard and turning it into a rock garden. Knowing my luck, Henry would just relocate his relentless digging to underneath our house until it eventually collapsed into his giant sink hole.

It’s been three months now that I’ve been under siege. The network of tunnels beneath my lawn makes the New York City subway system look like a country road intersection. My mere mortal powers are no match for the nefarious genius of my personal mole.

I’m trying to stay positive in the face of defeat. Thanks to Henry, I won’t have to aerate my backyard for decades.