Meet the Likely Next President of My Alma Mater – ME 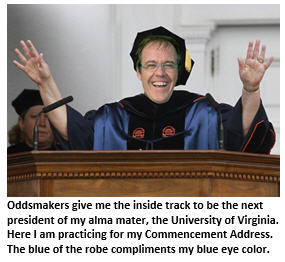 I don’t want to get ahead of myself, but, begrudgingly, I may have to put my island life retirement on pause and return to work. That’s because odds are I will be selected as the next president of my alma mater, the prestigious University of Virginia.

You see, I received this email from some guy named Louis something-or-other, whose title is “Rector”, whatever that means. Sounds important. So, Louis informs me the University of Virginia is seeking my input as an esteemed alumnus as to who should be the school’s next head honcho. He even included a survey. I love surveys.

Naturally, I was deeply honored by this personal invitation he sent to me and 27,000 other alumni. I sure hope he overlooks that my last donation to UVa was in 1985. I was short on cash then, so I sent a $25 Starbucks gift card regifted to me for Christmas.

The more I looked at Louis’s questions, the more obvious it became that I was the perfect candidate. Check out the survey and my responses below.

Dear University of Virginia alumnus: Identifying the right leader for our future will depend upon the collective wisdom of the University community, so we appreciate you sharing your thoughts via this survey.

When you think of the University of Virginia, what sort of community do you envision the next president fostering?

MY RESPONSE: As your next university president, I envision a community that believes in effective communication. That’s why I would give special funding to Speech Communication, my extremely lame major, which only qualified me to flip burgers for a living or go on to grad school. It’s time we make Speech Communication the major of the future.

I envision a campus replete with gourmet cafés serving only GMO-free selections. In my day, the popular dining hall was the Glass Hat, which we students all called the “Glass Rat” because that’s how their burgers tasted. My first order of business will be to raze that sucker to the ground. 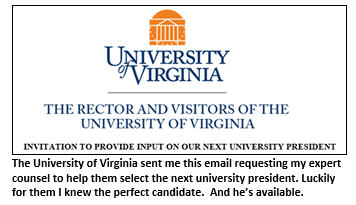 I also envision a diverse, inclusive community with people from all backgrounds, religions and ethnicities – except for Hungarians. I’ve never met a Hungarian I trusted. Oh, and no Norwegians either. It’s a long story. You see, my freshmen roommate Sven crashed my Honda Civic during Rush week and never paid for the repairs. He ruined it for me with all Norwegians. Or was he Swedish? Not sure. Okay, I better ban both, just to be safe.

Which issues should become the most important priorities for a new president at UVA?

MY RESPONSE: My first priority will be to get my own parking space. Next, I’ll get my office painted a classy shade of taupe – although I could live with harvest gold. A humongous wide screen TV with surround sound goes without saying. And my own butler. Alfred will do. And a female chauffeur. And a president’s mansion – with a moat.

My next priority: Explore innovative ways to increase revenues for the school. As a thought, we could require professors to adorn their tweed jackets with logos from sponsors like Valvoline and Go Daddy. Students would be charged an entrance fee to take their exams: $100 for a midterm; $200 for a final. In two semesters max, the University could afford to convert the Rotunda into a world-class casino with video poker machines – so even more revenues would stream in.

What are the most important personal characteristics for the next president to have in order to be successful?

MY RESPONSE: I strongly suggest the next president be a mature male, of average height, with a slight bald spot, and ill-fitting clothes. Oh, wait, I thought you were asking about physical characteristics. Now I see where you’re going with this question.

In that case, I think humility is very important. I’m the humblest person you’ll ever meet. I’ve often been compared to Nelson Mandela and Abraham Lincoln (albeit, never favorably). I believe the next president, in addition to being me, must be someone of great dedication and commitment. I plan to be totally into the gig, so long as it isn’t too taxing and I get summers off.

What are the areas of experience you would most like to see in the next president?

MY RESPONSE:  For starters, I came in second in Competitive Drill in 11th grade. I took three years of high school Latin, so I’m really good at making obscure conversation that sounds smart. For example: Et intinge conatus cancri? (That means, “Have you tried the crab dip?”) Impressive, I know. 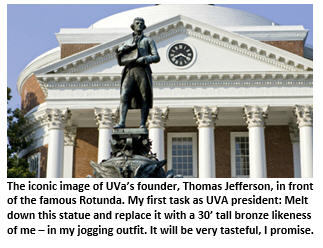 While I never served in our nation’s military, I did go to an all-boys’ military high school where I marched in the annual Memorial Day parade. Keeping step with my brothers-in-arms under the blazing May sun, balancing an unloaded rifle, and polishing the brass buttons on my dress coat to a bright luster was not unlike serving in combat, if you ask me.

Did I mention that I’ve donated over $200 to the University in the 40 years since I graduated? ($225 if you count the Starbucks card.)

Finally, I don’t think it’s any coincidence that my initials are the same as UVa’s founder, Thomas Jefferson: TJ. In conclusion, I’m confident I possess all the characteristics to Make UVa Great Again. If you don’t agree, perhaps these incriminating photos of Louis the Rector dressed up as a French Maid might persuade you. I’d hate to see them accidentally end up in the Washington Post, wouldn’t you?

One last question: How attached are you to the job title “President?” Is this negotiable? Personally, I’m partial to “Supreme Commander”, but I’m open to suggestions. [end of survey]

I think you’ll agree, I aced the survey. I’m feeling extremely good about my chances. I’m sure I could work from home in my Camano Island man cave – in my pajamas. Sure, I’ll make an occasional appearance on the Charlottesville, VA grounds. Thankfully, I saved my graduation gown, so I won’t need to buy dress clothes for when I’m “in residence.” I anticipate a seven-figure offer any day now. Wish me luck.