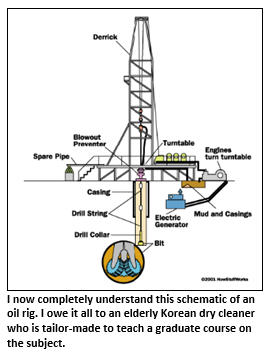 Did you know that on a deep-water oil rig, the crew cements casings between drillings and that when the rock cuttings reveal the oil sand from the reservoir rock, they then remove the drilling apparatus from the hole and perform a logging test to retrieve a core sampling before lowering a perforating gun into the well to set off explosive charges in order to create holes in the casing through which the oil can flow? Neither did I – that is, until this past Tuesday, when I stopped at my local dry cleaner to drop off a pair of pants.

It was a routine trip to my local dry cleaners. All I wanted was to get my trousers pressed. In and out in three minutes, right? Not quite. The owner, an elderly Korean man, was feeling particularly chatty, so it took me almost a half hour to get out of there – and I was the only victim, I mean, customer. This is the honest (significantly abbreviated) retelling of the day time stood still.

As I was wrapping things up, the proprietor, Mr. Ho, asked me my name – so he could write it down on the claim check. In retrospect, revealing that information was an egregious error.

Me: You don’t say? And to think we’ve never met.

Mr. Ho: He very smart. He manage oil rigs all over world.

Me: Very impressive. Well, thank you. Have a nice day.

Mr. Ho: He in charge of oil rigs in Africa and Asia. But not South America.

Me: Fascinating. So, you say my pants will be ready on Friday afternoon? See you then.

Me: Um, yeah, I have Welsh ancestors – and Scottish and German.

Mr. Ho: Keith no German. He Welsh. He very smart. Was my boss. He work in oil business for years. Manage rigs. I work on rigs for career.

Now I SHOULD have just ignored that last comment, smiled, turned and marched out the door. But No! I had to be polite and ask, So, you worked on an oil rig, you say? I immediately paid for this blunder. 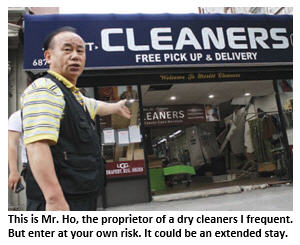 Mr. Ho then proceeded to go on a stream-of-consciousness rant to rival James Joyce’s epically cryptic tome, Ulysses. He told me Keith Jones’ life story. And now I will tell you – because I refuse to suffer alone. This fellow Welshman had planned to play professional soccer until in 11th grade he suffered a career-ending injury in a rivalry match between his beloved Blaenau (aka Blaynow aka Blnnkwough) Gwent High School, and their nemesis, The Bruisers of Bryngwyn Normal School (aka the Brewsters of Brrnnggwwnnyygwnn Anything But Normal School).

Mr. Ho was meticulously detailing Keith Jones’ soccer – er, football – prowess, along with a sidebar about Keith’s interest in spelunking and hill walking, when he suddenly veered off to an examination of Keith’s career in the oil business. It goes without saying that that train of thought would lead to an analysis of how oil rigs operate. Why was I surprised? Mr. Ho began an in-depth monologue describing the oil extraction process. By the end of his lecture, I’m convinced, if I ever were to apply for a job on a Keith Jones oil rig, I could ace the first round of interviews.

I tried politely to extricate myself from this impromptu TED Talk on the evolution of drill bit technology, but Mr. Ho was on a roll. The next portion of his presentation – and mind you, there was no intermission – was a testimonial about how excellent American oil rig management techniques were, compared to the rest of the world. I had difficulty untangling his meaning, due to his heavily fractured English, but at one point he actually said, “America management technique so good, could even teach ten-year-old girl to run oil rig.”

This unusual assessment led to an indecipherable discussion about the assembly process to lay thousands of feet of piping in deep water. My contribution to this conversation consisted of uttering “uh huh” at 45-second intervals. Then, as I teetered on the edge of REM sleep, I suddenly became aware that Mr. Ho had asked me a question: “What wrong with American elect college? Why no change in 200 year?”  Honestly, I had no idea where he was going with this – or when he would commute my sentence. 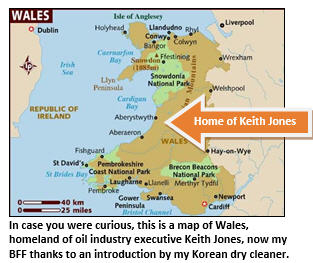 This launched a discourse on American politics. Mr. Ho ranted about Trump, and as much as my heart agreed with him, my brain knew better than to speak up. So, I just nodded and said, “You don’t say?” and looked at my watch for the 27th time.

Eventually, through no help from me, he transitioned over to a lighter topic – the weather and how much rain we’ve had lately – which somehow inspired him to reflect on how much rain they get in Wales, where Keith Jones is from. Ah yes, Keith Jones – again.

I looked at my watch – for the 28th time – and apologetically lied, “Well, that was quite something. See you on Friday.” But apparently, what Mr. Ho heard was, “Could you regale me with tales of your life in Korea?” And he started down yet another rabbit hole beginning with his childhood in Seoul.

I’m not sure what the takeaway lesson is from this encounter. Perhaps it’s to be more assertive when I need to leave. Or maybe it’s to relax and not worry so much about my to-do list. Or maybe, just maybe, it’s to remember that the journey IS the destination, and along the way, there are people with stories to tell, and if I take the time to listen, I might learn something while making someone’s day. And now I have oil rigging as a fallback career option. Thank you, Mr. Ho.

P.S. My wife just bought me perma-press pants. So, I guess I won’t be seeing Mr. Ho for a while.