Trading Stories at My College Reunion 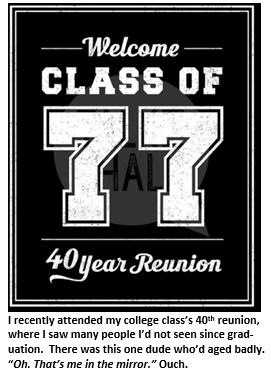 I just returned from my 40th college reunion. It was an amazing experience to reconnect with many people I have not seen in decades. What college did I attend, you ask? Well if you guessed Harvard University, you’re extremely close – in fact, my alma mater shares several letters in common with Harvard, including a V, an R, an A and the entire word “University” (University of Virginia).

One thing I’ve always preached to my daughters is the importance of being authentic, and to be proud of who you are – which can be a challenge at times when you realize you’re a humor writer. To be honest, I was a little anxious about seeing my old college cronies. Sure, I’ve had my share of achievements since I graduated – like having never once been convicted of a major felony. Or the fact that I am a published author of a book that has sold roughly 100,000 copies (if you round up to the nearest 100,000).

I arrived at the reunion’s opening reception, and the first person I met was Brett Farnsworth III. I told him I wrote a weekly humor blog. As though he were experiencing an adverse Pavlovian reaction to the word “blog”, Brett abruptly excused himself, proclaiming he had to step away for a phone interview with CNN to discuss his role spearheading NASA’s manned flight program to Mars – ETA: 2022.

Next, I bumped into Richard Brantley, who lived two doors down in my first-year dorm. “Tim, wow, I barely recognized you with your weight gain. And when did you lose so much hair?” I started feeling a bit self-conscious, but I tried to be polite, asking him what he’d been up to in recent years. “Oh, nothing much,” he started. “Same old – same old. Still Senior Vice President of Global Strategy for Apple. What about you?” A nagging feeling was mushrooming inside me that my career accomplishments might not stack up to those of my fellow alums.

In an attempt to preserve my rapidly crumbling self-esteem, I went into improv mode. “Um, well, since you asked…. I was recently promoted to Executive Senior Vice President of International Brand Management for P&G – you know, Proctor & Gamble. I just flew in from our Geneva manufacturing facility for the reunion.” Okay, so I lied. Sue me. I just didn’t know how to make “I write blogs about being a bad parent” sound impressive. On the one hand, I felt badly about the ruse. On the other hand, Richard was clearly awed by how I engineered a five percent gain in market share in our consumer brands division in my first quarter in the job. So much for my plans to be authentic. 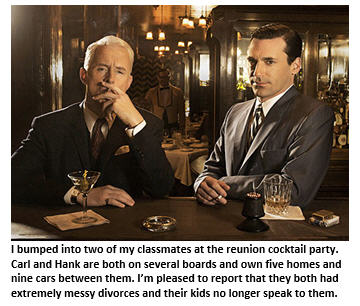 Next in line to humiliate me was Beth Yates, a girl I dated briefly in my sophomore year – until I foolishly revealed that I was a Communications major. It took her less than 60 seconds to casually mention that she was a nationally recognized heart surgeon at Johns Hopkins Medical Center.

Apparently, Beth had patented some heart valve that has saved over 5,000 lives – which is truly a remarkable feat. Almost as remarkable as my research as Chief of Oncology at the Mayo Clinic. Did I happen to let it slip that my pioneering discoveries have saved five thousand and one lives? You bet I did. She asked me to describe my methodology, but unfortunately, just as I was about to explain, my phone buzzed. “Excuse me. It’s Norway calling. Something about the Nobel Prize.” The words just flowed – and sounded much cooler than “It’s my podiatrist confirming my appointment to treat my toe fungus”.

Things were going quite well. People seemed to be impressed by my many previously unknown accomplishments. Conrad Marriott, who I learned was the US Ambassador to Denmark, was surprised to hear that I recently negotiated a peace treaty between Slovakia and Bosnia – Herzegovina, especially since he wasn’t even aware the two countries were adversaries. Personally, I was impressed that I could remember there was a place called Bosnia – Herzegovina.

Lizzy Van Engstrom, currently a tenured professor at Yale Law School, was unfamiliar with my recent promotion to Dean of Stanford Law School. I sure hope Stanford has a law school. And Sally Vanderbilt, who is now the head of an NGO building a water purification plant in Uganda, was equally taken aback to hear that I was in the final stages of creating a hybrid wheat-rice seed that would eliminate hunger in Africa within fifteen years. She congratulated me on my pioneering work, but I told her my incredible team of scientists deserved most of the credit.

It turns out that I appear to have achieved far more since college than I had realized. Oh sure, I hear you saying judgmentally, “But Tim, you were just making this stuff up.”  In my defense – hey, is it just me or is it really humid out lately? 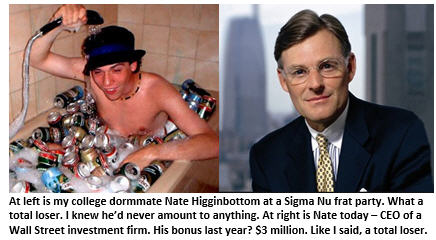 As a result of my stellar performance at the reunion, I’ve been invited to be the keynote speaker at an upcoming conference on clean energy solutions for developing nations. Of course, I know nothing about that topic. I’ll just google it.

As I headed home from the reunion, I felt a little uneasy that I hadn’t been authentic about my life over these past 40 years and I’d spent most of my time at the reunion just making up stories. But then I thought, hey, as a humor columnist, that’s what I do. I’m a professional story teller. So, in a way, I was just doing my job.

Well, I must wrap this up. I’m scheduled to have a conference call with former classmate Bronson Wellington. He’s Assistant Deputy Secretary of State and he heard that I may have some game-changing ideas on the Middle East problem and wants to tap my expertise. I’m flattered he thinks I might be able to help.